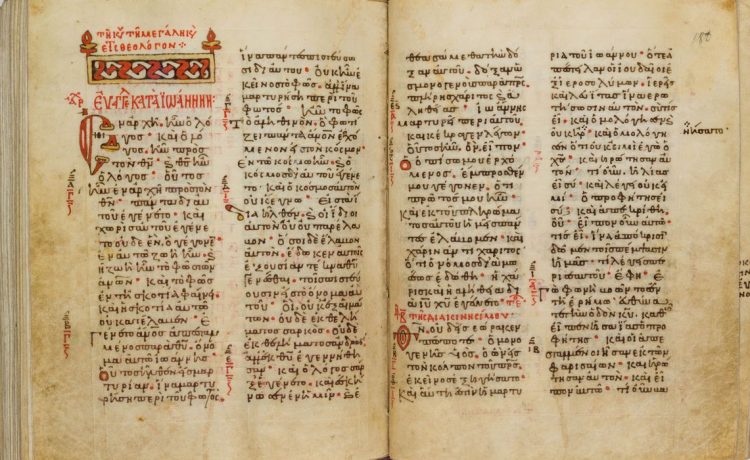 An embellished hand-lettered Greek-language manuscript of the Gospels will return to a Greek Orthodox monastery Thursday, 105 years after foreign forces stole it during World War I, the Museum of the Bible said Wednesday evening.

“It is a true blessing for the monastic sisterhood and the Christian world to see the religious artifacts that were removed from the Monastery officially return to their natural home and used hereafter for the spiritual edification of the faithful, and by art and history scholars,” Ecumenical Patriarch Bartholomew I, the leader of the Orthodox Church worldwide, said in a statement released by the museum.

The Evangelistary Manuscript 220, as the volume is called, dates from the late 10th or early 11th centuries, the museum said.

It was taken by Bulgarian guerrillas in 1917 during World War I from the Theotokos Eikosiphoinissa Monastery (also known as Kosinitza Monastery) near Drama, Greece.

Before the Green Collection of Oklahoma City acquired the work at a Christie’s of London auction in 2011, its last recorded sale was by antiquarian book dealer H.P. Kraus in 1958. The 2011 auction catalog did not name Mr. Kraus’s customer.

The Green Collection donated the volume to the Museum of the Bible in 2014.

In 2020, Museum of the Bible officials told Bartholomew they would return the manuscript. Before the repatriation, it was part of an exhibit at the D.C.-based museum, alongside three other manuscripts that the Orthodox leader had loaned to the facility.

Bartholomew visited Washington last October but was admitted for observation at George Washington University Hospital, causing him to miss an in-person event at the museum.

He instead addressed the function via video link.

Steve Green, the museum founder and chairman, said in a statement Wednesday that the museum is “honored to partner with the Ecumenical Patriarch on a permanent exhibition of biblical manuscripts and religious objects connected to the Bible.”

“I was humbled to be received by His All-Holiness in Istanbul [on Tuesday] and look forward to celebrating the return of the gospel manuscript to the Theotokos Eikosiphoinissa monastery,” he said.

Jeffrey Kloha, chief curatorial officer at the museum, said the returned manuscript is important not only as part of the history of the New Testament in the Greek language, but also because it “tells of at least two communities that used it for prayer and devotion century after century and of the day of violence and sacrilege over a century ago.

“Now, this manuscript can tell a new story: a story of reunion and hope that the pages of this manuscript will continue to give light, even though many have tried to extinguish that light,” he said.

The museum has faced controversy over past acquisitions, some allegedly involved in shady corners of the international black market.

In 2017, Iraq received 450 cuneiform tablets and 3,000 ancient bullae, or seals, from the Museum and Green family firm Hobby Lobby paid a $3 million fine. A year later, the Museum removed five of 16 reputed Dead Sea Scroll fragments from display after experts determined the items were forgeries.

“The procedures in place now are very, very tight,” the curator told the newspaper. “If we don’t have every detail filled in, it’s simply not considered. The process is very different than it was 10 years ago.”