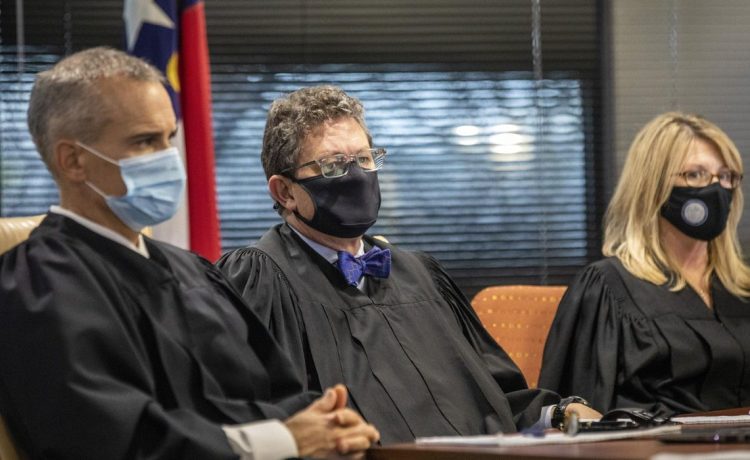 RALEIGH, N.C. (AP) — North Carolina’s Supreme Court ruled on Friday that state Senate boundaries drawn by Republican legislators – under which the court permitted this year’s elections to be conducted – remain tainted by partisan bias and must be redrawn by trial judges.

The state’s highest court last February had allowed state House and Senate district lines that were approved by lawmakers to be used in this year’s elections. These lines replaced initial versions the GOP-controlled General Assembly approved in November 2021, but were later struck down by justices for violating what they called the state constitution’s prohibition against partisan gerrymandering.

Earlier this year, a panel of three trial judges had agreed that the replacement maps met standards set by the Supreme Court in a landmark case. Facing a deadline to begin candidate filing, the justices quickly allowed those lines to serve as the basis for this year’s elections. Still, advocacy groups and voters who successfully sued to get the justice to strike down the original redraws said that the second-chance maps used this fall still unfairly treated Black and Democratic voters.

In a 4-3 ruling with the Democratic justices in the majority, the court on Friday said that while the House map continued to be constitutional, under closer inspection of the Senate map, the trial judges’ conclusions were wrong.

The majority directed that the Senate map be returned to the trial judges to create a modified plan that would be used for the 2024 elections only.

Through Hudson’s opinion, the court also rejected the wishes of Republican leaders to strike down the congressional redistricting map created by a panel of trial judges that was used to conduct the Nov. 8 elections. The Supreme Court last February had OK’d its use as well after the trial judge panel declared a map drawn by the General Assembly still didn’t provide enough partisan fairness. State law already requires a new congressional map for the 2024 elections because judges drew the ultimate plan, not legislators.

How ever the justices would have ruled Friday doesn’t change the 2022 elections operated under the current boundaries.

The results already have been certified. Republicans gained two additional seats in both the state House and Senate, while Democrats won two more U.S. House seats, leading to a 7-7 party split within the state’s congressional delegation. Two other congressional maps approved by Republican legislators but were blocked were more favorable to GOP candidates.

The two additional Senate seats that Republicans won gave them a veto-proof majority in the chamber for the next two years. But House Republicans fell one seat short of holding similar power to override Democratic Gov. Roy Cooper’s vetoes.

Last February, the current 4-3 Democratic majority ruled that the congressional and legislative maps approved by the General Assembly in November 2021 unlawfully gave Republicans outsized favoritism compared with Democrats. The lawsuits’ plaintiffs included the N.C. League of Conservation Voters and Common Cause.

Whatever the trial judges draw up for a modified Senate plan, Republican lawmakers are likely in a more favorable position before the state Supreme Court come January should those boundaries be appealed.

As with the dissenting opinion last February, Chief Justice Paul Newby wrote Friday’s dissent as well. He said all three maps before the the court on Friday should have been upheld.

“By its actions today, the majority confirms the dangers of judicial usurpation of the legislative redistricting role,” Newby wrote. “By intentionally stating vague standards, it ensures that four members of this Court alone understand what redistricting plan is constitutionally compliant.”

Any matters involving congressional redistricting at the state Supreme Court could be moot should the U.S. Supreme Court rule in favor of Moore and Berger. They argue that the U.S. Constitution delegates congressional elections solely to state legislatures, leaving state judicial branches out. Oral arguments in the case were held last week.