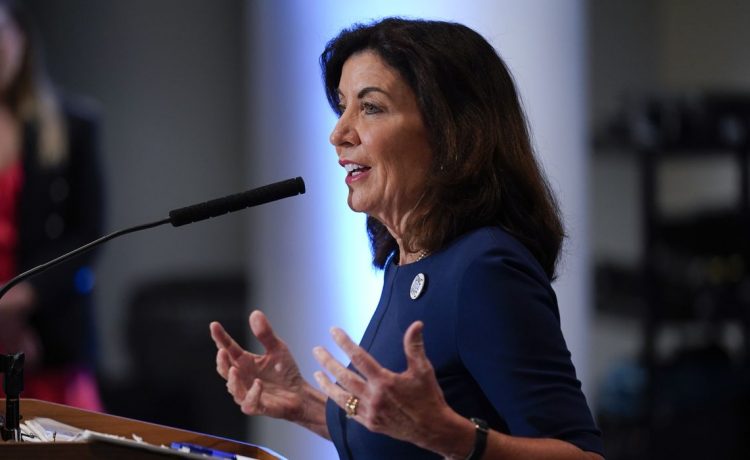 New York Gov. Kathy Hochul enjoys a 16-point lead over her Republican opponent, Rep. Lee Zeldin, that is fueled by her solid base of support in New York City and women throughout the Empire State, according to a poll released Tuesday.

Emerson College Polling said the Democratic governor leads Mr. Zeldin, 51% to 35%, with about three months to go before the general election.

“Hochul has a clear base of women voters in New York. The governor holds a three-point lead over Zeldin among male voters, 46% to 43%, but that lead expands to 29 points among women voters, 55% to 26%,” said Spencer Kimball, executive director of Emerson College Polling.

She enjoyed a honeymoon of sorts after taking over for New York Gov. Andrew Cuomo, a fellow Democrat who resigned amid sexual harassment allegations.

Pundits and state residents saw her as a stable presence and nice contrast to the polarizing personalities who had dominated Albany, though the governor has run into some challenges.

She chose a former state senator, Brian Benjamin, to serve as lieutenant governor. Mr. Benjamin was later indicted on charges of bribery and fraud, leading to charges the governor missed warning signs.

Mr. Zeldin is also blaming Ms. Hochul for the state’s lenient bail laws after a blade-wielding man tried to attack him on the campaign trail, only to be released on his own recognizance. The man was later arrested and put in custody on federal charges.