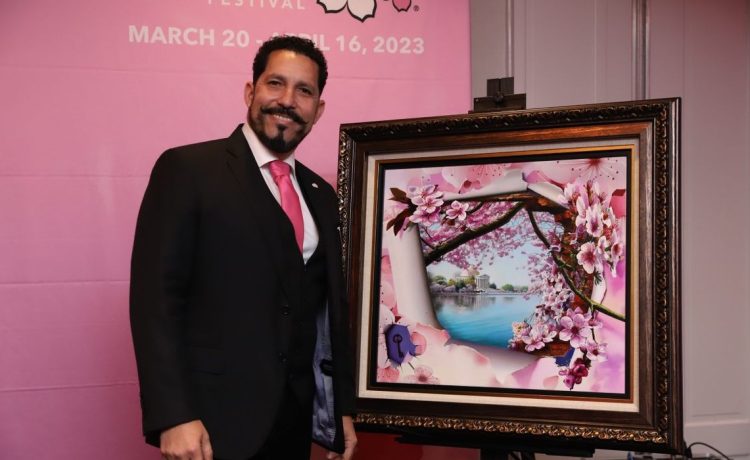 The National Cherry Blossom Festival will return this spring in person for the second consecutive year with Mickey Mouse and Minnie Mouse as parade grand marshals, officials have announced.

“Spring’s arrival is only 16 weeks away, and we plan to present a host of traditional favorites and new experiences that will unite communities and bring friends and families together to make wonderful memories,” said Diana Mayhew, president and CEO of the National Cherry Blossom Festival.

The children’s characters will travel from Walt Disney World Resort in Orlando, Florida, to lead an April 15 parade along Constitution Avenue, organizers said Tuesday during a preview event at the University Club of Washington, D.C.

Officials also unveiled the official artwork for the 2023 festival, which will take place from March 20 to April 16.

Cuban immigrant Orlando Quevedo, an artist with Park West Gallery based in Southfield, Michigan, employed magical realism to create a canvas image of cherry blossoms framing the Tidal Basin and the Jefferson Memorial. It will be on display through Dec. 7 at the Japan Information and Culture Center at the Japanese Embassy in Northwest Washington.

The annual festival celebrates the 1912 gift of 3,000 cherry blossom trees from Tokyo Mayor Yukio Ozaki to the District. The trees encircling the Tidal Basin between the Jefferson Memorial and Washington Monument bloom each spring.

In March 2020, D.C. Mayor Muriel Bowser deployed city police and the National Guard to limit the large crowds flocking to see the blooming cherry trees as the first COVID-19 lockdowns went into effect. A few days into the 2021 festival, the National Park Service closed parking lots and pedestrian access points amid coronavirus concerns.

This year’s festival took place largely without restrictions after Ms. Bowser lifted vaccination card and indoor masking requirements on March 1. Officials have not ruled out the possibility of renewed precautions if COVID infections spike again.