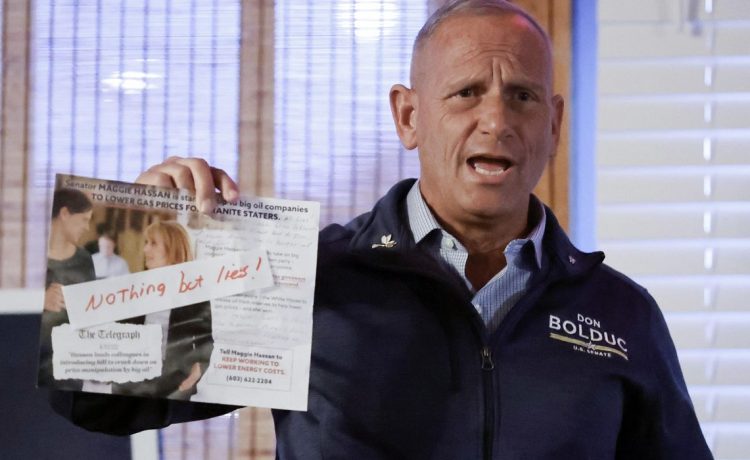 Republicans are throwing money at the New Hampshire Senate race after polls showed retired Army Brig. Gen. Don Bolduc within striking distance of Democratic Sen. Maggie Hassan in a race the GOP had all but forfeited as a missed opportunity to pick up a seat.

The National Republican Senatorial Committee will help the Bolduc spend $1 million on a new ad after the committee decided the race is within the margin of error and winnable, according to a memo Tuesday from Rick Wiley, a senior adviser to Mr. Bolduc.

An Emerson College poll on Monday showed Ms. Hassan leading Mr. Bolduc, 48%-45%, giving the GOP hope after earlier polls suggested a victory was out of reach.

“With less than two weeks to go before the November 8th general election, General Don Bolduc’s campaign is continuing to gain momentum and is well-positioned to pull off an upset win against incumbent U.S. Senator Maggie Hassan,” Mr. Wiley wrote. “The narrative that Gen. Bolduc couldn’t put this seat in play has been dispelled and Senator Hassan is feeling the pressure.”

The Senate is evenly divided, 50-50, with Vice President Kamala Harris serving as a tiebreaker for Democrats, so any chance to flip a seat is precious to both parties.

Mr. Bolduc has been a thorn in the establishment GOP’s side this year, given his views and comments. His primary win over centrist Chuck Morse left many feeling the race was lost to Ms. Hassan.

Mr. Bolduc supports repealing the 17th Amendment, which allows for the direct election of senators by the public. He once called New Hampshire Gov. Chris Sununu, a Republican, a “Chinese communist sympathizer.” He also echoed former President Donald Trump’s view that the 2020 election was stolen, though he concluded “the election was not stolen” right after winning the GOP primary.

The NRSC’s decision to invest in the race is a notable turnaround since the Senate Leadership Fund, a group linked to Senate Minority Leader Mitch McConnell, recently withdrew $5.6 million in ad reservations in New Hampshire.

“Our polling, along with recent public polling, shows that this race is in the margin of error and winnable. The NRSC is proud to stand with General Bolduc. We’re going to win this race so Don Bolduc can bring real leadership back to this Senate seat,” Mr. Scott told Axios, which first reported the new ad buy.

Fergus Cullen, a former chairman of the New Hampshire Republican Party, told The Washington Times that Mr. Bolduc’s rising fortunes are due to concerns about inflation, a general malaise about the Biden administration and a spike in local energy costs that is showing up on recent bills.

He said Mr. Sununu is on track to win reelection by 10 percentage points, which could lift Mr. Bolduc, and the general shift in Senate polls is due to Ms. Hassan’s “general weakness — not really anything Bolduc is doing.”

Ms. Hassan has fought back by casting Mr. Bolduc as beholden to Big Pharma and Big Oil at the expense of Granite Staters. She says Mr. Bolduc will threaten Medicare and Social Security and, like other Democrats, she is warning that a vote for Mr. Bolduc will result in new abortion restrictions.

“Granite Staters will stop Don Bolduc from being the ‘yes’ vote McConnell needs to ban abortion nationwide,” she tweeted this month.