The Great Days > News > National Prayer Breakfast, once a hot-button gathering, to tone it down for 2023, organizer says
News

National Prayer Breakfast, once a hot-button gathering, to tone it down for 2023, organizer says 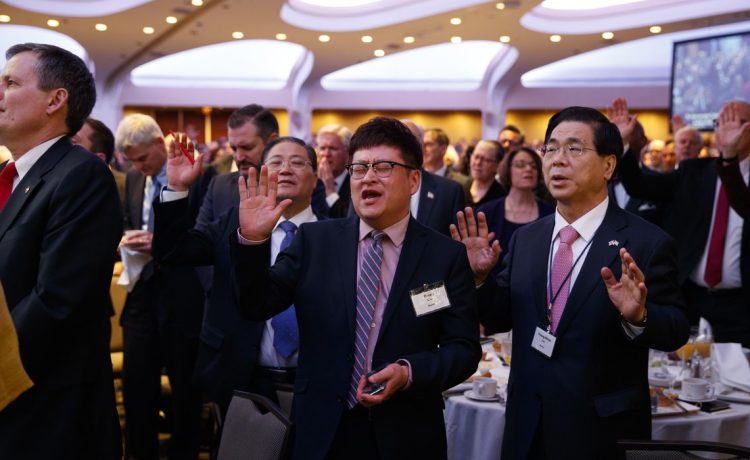 The head of a new organization sponsoring next week’s National Prayer Breakfast said the event is returning to its low-key, bipartisan roots.

The annual gathering, which began in 1953 with President Eisenhower attending, was sponsored by the International Foundation for a number of years and grew to a gathering of thousands at the Washington Hilton.

Since its founding, every president has attended the event, and it’s expected President Biden will attend this year as well. Both the Rev. Margaret Grun Kibben and the Rev. Barry C. Black, respectively the chaplains of the House and Senate of Representatives, are also due to participate.

In recent years it became a place where expressions many viewed as partisan took center stage, blunting the message of collective prayer “in the spirit of love and reconciliation” as was initially intended.

“Back in the early days, it really was just the president and members of the House and Senate,” former Sen. Mark Pryor, Arkansas Democrat, told The Washington Times on Wednesday.

Members of both chambers have separate weekly prayer breakfasts where they come together, he said.

The goal of the new National Prayer Breakfast Foundation, the nonprofit group that Mr. Pryor serves as board president, is to “to return the annual event to its origins as a more intimate gathering between the Congress, the president, and those in his administration,” an announcement stated.

The motivation for change came at the weekly ecumenical breakfasts, Mr. Pryor said.

“All faiths are welcome to those,” he said. “Jewish members come, and others. It’s a mix. It’s non-sectarian.”

Mr. Pryor, who represented Arkansas in the Senate from 2003 to 2015, said the Capitol event is open to members and a “plus one,” either a spouse or a constituent.

“That’s what the [members of] Congress wanted,” he said. “It’s going to be obviously a lot smaller, [and] that probably knocks out all the international guests,” he added, noting that those overseas visitors were among those who swelled the Hilton audience to over 3,000.

The former National Prayer Breakfast attracted its share of controversy. In 2013, Ben Carson, then the director of pediatric neurosurgery at Johns Hopkins Hospital, spoke against political correctness and rising national debt, with President Obama sitting a few feet away.

Four years later, Russian operative Maria Butina obtained tickets to the gathering for herself and several associates of Alexander Torshin, a U.S.-sanctioned Russian banker. A 2018 affidavit supporting Ms. Butina’s federal indictment as an unregistered foreign agent claimed her activities at two of the prayer breakfasts were designed to further the aims of Russian President Vladimir Putin.

Ms. Butina pleaded guilty in December 2018 and was deported to Russia after a brief prison sentence.

The event’s new organizers pledged changes in format and a focus on domestic participants in their statement.

“The International Foundation, [which] held the breakfast for many decades, will no longer be responsible for the official event at the Capitol but has organized what it is calling ‘The Gathering’ at the traditional location to pray for leaders of the world and for peace among nations,” the statement said.

Mr. Pryor said of the previous sponsors’ focus that “no one thinks it’s bad or evil or anything like that. It’s just that it’s just not what the National Prayer Breakfast originally was.”

Not everyone is sanguine about the Prayer Breakfast, either in its former structure or under the new nonprofit organization.

The Wisconsin-based Freedom From Religion Foundation said Wednesday it issued a call for members of Congress to boycott the proceedings.

“For decades, FFRF has protested the appearance of the National Prayer Breakfast being a quasi-governmental gathering, which pressures the president and Congress to put on a display of piety that sends a message that the United States is a Christian nation,” Annie Laurie Gaylor, the group’s co-president, said in a statement.

“The National Prayer Breakfast Foundation has no business summoning the president or Congress to a religious event requiring a show of obeisance and partaking in private religious rituals,” she added.
The International Foundation did not immediately respond to a request for comment from The Washington Times.