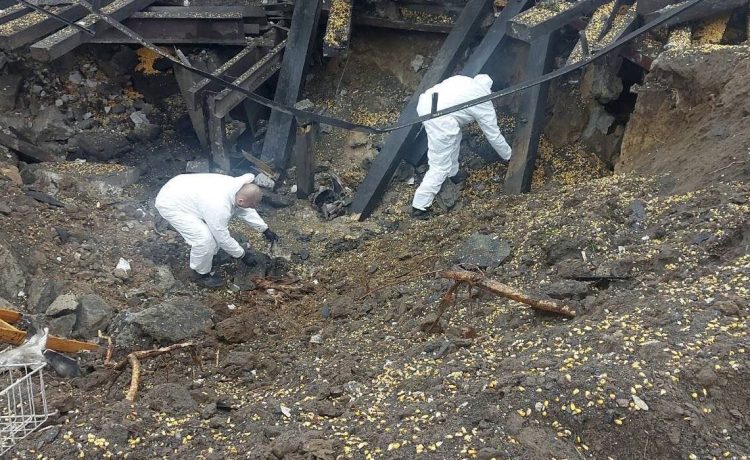 Fears that the war with Ukraine could spill over into a clash between Russia and NATO eased slightly Wednesday as Western officials said it was likely an errant Ukrainian defensive shell — not a deliberate salvo from Russian forces — that hit a grain facility inside Poland and killed two citizens of the NATO country.

Tensions had soared a day earlier as the strike inside Poland, the first in the nearly nine-month war sparked by Russia’s invasion of Ukraine, came as Russia was unleashing a countrywide missile assault on Ukrainian cities and power stations. The Kremlin quickly denied any of its missiles targeted Polish territory and Polish President Andrzej Duda appeared to confirm that after a series of emergency meetings in both Warsaw and NATO’s Brussels headquarters Wednesday.

“Ukraine’s defense was launching their missiles in various directions, and it is highly probable that one of these missiles, unfortunately, fell on Polish territory,” Mr. Duda told reporters. “There is nothing, absolutely nothing, to suggest that it was an intentional attack on Poland.”

Still, President Biden and his advisors kept a heavy barrage of criticism of Russian President Vladimir Putin, organizing an unexpectedly strong rebuke of the invasion by most of the Group of 20 leaders summiting in Bali, Indonesia this week and arguing that Mr. Putin’s decision to start a war in the heart of Europe on NATO’s borders made deadly incidents such as what happened in Poland almost inevitable.

At the Pentagon, America’s top military officer said Russia’s missile bombardment targeting Ukraine’s civilian power system on Tuesday could amount to a war crime, one that left more than a quarter of the population without electricity as the colder temperatures settle in.

General Mark A. Milley, Chairman of the Joint Chiefs, said Russian forces launched at least 60 missiles, and perhaps as many as 100, at targets in Ukraine during a barrage that he said was intended to bring suffering to civilians.

“We’ll have a better assessment in the days ahead [but] it was likely the largest wave of missiles that we’ve seen since the beginning of the war,” Gen. Milley told reporters at the Pentagon following a virtual meeting of NATO and allied defense ministers about Russia’s invasion of Ukraine.

“With the onset of winter, families will be without power and, more importantly, without heat. Human suffering for the Ukrainian population is going to increase,” Gen. Milley said, offering a grim prediction of how the country may fare in the future without a working power grid. “These strikes will undoubtedly hinder Ukraine’s ability to care for the sick and the elderly.”

Secretary of Defense Lloyd Austin said a U.S.-supplied air defense system has successfully intercepted Russian missiles in Ukraine even as the Pentagon said it agreed with the conclusion that an errant Ukrainian air defense missile was likely the cause of the explosion in Poland that killed two people.

“The investigation is still ongoing. We are assisting in any way that we can. We have some experts on the ground,” Mr. Austin said. “We have full confidence in Poland’s ability to conduct this investigation in a proper way.”

“But let me be clear. This is not Ukraine’s fault,” Mr. Stoltenberg said. “Russia bears ultimate responsibility as it continues its illegal war against Ukraine.”

The cross-border attack “wouldn’t have happened without the Russian war against Ukraine, without the missiles that are now being fired at Ukrainian infrastructure intensively and on a large scale,” added German Chancellor Olaf Scholz.

Ukrainian President Volodymyr Zelenskyy, who originally called the Polish strike a “significant escalation by Moscow, on Wednesday said more needed to be known about what happened and what went wrong.

Mr. Zelenskyy said he had “no doubts” about a report he received from his top commanders “that it wasn’t our missile or our missile strike.” Ukrainian officials should have access to the site and take part in the investigation, he added, according to the Associated Press.

“Let’s say openly, if, God forbid, some remnant [of Ukraine’s air defenses] killed a person, these people, then we need to apologize,” he said. “But first there needs to be a probe, access.”

Mr. Austin lauded the effectiveness of the NASAMS (Norwegian Advanced Surface-to-Air Missile System) that the U.S. shipped to Ukraine. He said NASAMS has had a 100% success rate in taking out Russian air targets, such as cruise missiles.

Kremlin spokesman Dmitry Peskov had some rare, backhanded praise for Mr. Biden, who was relatively cautious in his first comments on the Polish strike as officials tried to determine what happened.
“In this case, it makes sense to pay attention to the restrained and far more professional response of the American side and the American president,” Mr. Peskov said in Moscow, according to the official Tass news service. Mr. Peskov also sharply rejected the charge that Russia shared responsibility for what happened in Poland.

“Russia had nothing to do with it,” he said. “Let us call things by their proper names.”

Gen. Milley said the confusion over the Polish incident could not obscure the fact that Russian forces have suffered repeated reverses since the invasion began Feb. 24, nearly nine months ago.

The Kremlin has been unable to accomplish any of its objectives in Ukraine ever since Russian troops first rolled across the border in late February, the general said. Their plans included overthrowing Ukrainian President Voloidymyr Zelenskyy and his government, securing access to the crucial Black Sea, capturing Odesa, and fracturing the NATO alliance.

The explosion in Poland on Tuesday set off a flurry of high-level calls between world leaders who were concerned about a NATO member state possibly being attacked and asking for a response from allies. Gen. Milley said he reached out to Gen. Valery Gerasimov but was unable to get through to his Russian counterpart.

Unable to hold back counterattacking Ukrainians in the east and south, Russian forces have increasingly resorted to targeting Ukraine’s power grid as winter approaches. Russian attacks in the previous 24 hours killed at least six civilians and wounded another 17, a senior official, Kyrylo Tymoshenko, told the AP Wednesday.

Lviv Gov. Maksym Kozytskyy told the wire service that two of three Russian missiles hit critical energy infrastructure in the western province, which is right on the Polish border. Power was restored to about 95% of the province, he said, but only 30% of consumers can use electricity at the same time.

With Russian forces facing tremendous losses of troops and material on the battlefield, it might soon be time for Ukraine to consider negotiating with Russia for a political solution to the war. The chance of a purely Ukrainian military victory that would see the Russians fleeing back across the border isn’t high, Gen. Milley said.

“Russia right now is on its back. The Russian military is suffering tremendously, You want to negotiate from a position of strength,” he said. “There may be a political solution where ‘politically,’ the Russians withdraw. That’s possible.”

Although they are reeling, Russia is not yet a spent force on the battlefield, U.S. officials said. After invading Ukraine with an army of about 180,000 personnel, their troops still occupy at least 20% of the country.

“They still have significant Russian combat power inside Ukraine,” Gen. Milley said. “Kicking Russia physically out of Ukraine is a very difficult task. It’s not going to happen in the next couple of weeks unless the Russian army completely collapses, which is unlikely.”

— Tom Howell Jr. contributed to this report, which was based in part on wire service accounts.