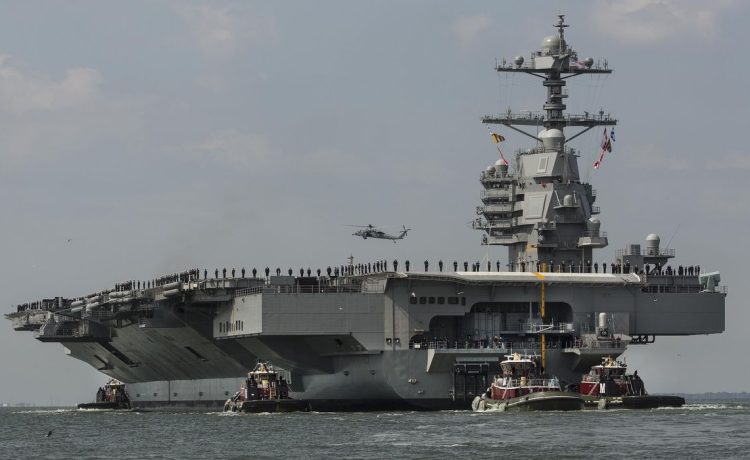 Congress has overruled President Biden — again. The bipartisan-negotiated National Defense Authorization Act sailed through the Senate last week, just as it did in the House a week earlier.

The bill authorizes defense spending $45 billion above what the president had requested, the better to address the threat from China. That’s a very good decision for the nation as a whole, and it looks to be a blessing for the Navy.

This display of firm, bipartisan commitment will not be lost on Moscow or Beijing. Both countries are sizing up Washington’s willingness to push back on their own adventurism, particularly Russian President Vladimir Putin’s ongoing war in Ukraine and Chinese President Xi Jinping’s saber-rattling over Taiwan. The boost in defense spending sends an unmistakable message.

As for the Navy, the bill provides for block-buys of up to 15 destroyers, eight logistics ships and five amphibious warships. For years, the Navy has struggled with getting predictable shipbuilding budgets, let alone publishing a stable plan to guide its decisions. Block buys would provide shipbuilders and the Navy with much-needed predictability and allow the service to realize considerable savings. Of course, these benefits will accrue only if the necessary appropriations follow suit.

The appropriations act also amends Title 10 of the U.S. Code, formally broadening the Navy’s peacetime missions. The new language clearly states what has been true since the nation’s founding: that the Navy operates forward to deter aggression and protect America’s interests in peacetime.

This seemingly minor change in description of the service’s responsibility should make it easier for the Navy to justify the resources necessary to operate in “gray-zone” operations. And more resources are, indeed, needed to return the South and East China seas to a more rules-based order for shipping, oil exploration and fishing for the U.S. and our regional partners.

Also encouraging: The bill calls for a commission to study the future of the Navy. This has the potential to address the need to recapitalize the fleet so that it will be capable of waging a major, protracted war at sea. A key determinant of success for this commission should be how many of its recommendations make it into legislation signed by the president.

A couple of other items in the NDAA are also important for the Navy’s success in the Indo-Pacific theater, where China is most active.

Since President Obama’s “Rebalance to Asia” began in 2012, getting resources to the region has been problematic. To remedy this, the Pacific Deterrence Initiative was created in fiscal 2021. The authorization bill provides a needed extension of the initiative and expands it to include security cooperation authorities and a more explicit section on basing needs.

Security cooperation, like the provision of arms and training to Ukraine, has proven to be strategically impactful and is now an imperative if the free world is to deny China a victory in a war over Taiwan. This action is further backed in the NDAA by a new Taiwan Enhanced Resiliency Act to provide significant new funding to bolster the island’s defense against a rapidly modernizing and expanding Communist Chinese threat.

The negotiated NDAA also establishes a new operational headquarters in the Indo-Pacific Command’s area of operations. Specific mention of Assault Breaker II (Assault Breaker I was a Cold War effort to blunt a massed Soviet armored invasion of Western Europe) — suggests that this command will focus on developing and deploying new capabilities to blunt any Chinese assault in Asia. Little is publicly known on this, however, and it bears watching for further details in the coming months.

There is much to like in this defense authorization bill, but in the end, it is the appropriation of money that matters most. Moreover, all this goodness could just as easily evaporate or be undermined with unserious execution by the administration.

For now, at least, the Navy can look forward to getting some smart budgetary and policy assistance, and that is good news for taxpayers and bad news for Mr. Xi in Beijing.

• Brent D. Sadler is a senior research fellow for naval warfare and advanced technology at The Heritage Foundation’s Center for National Defense.