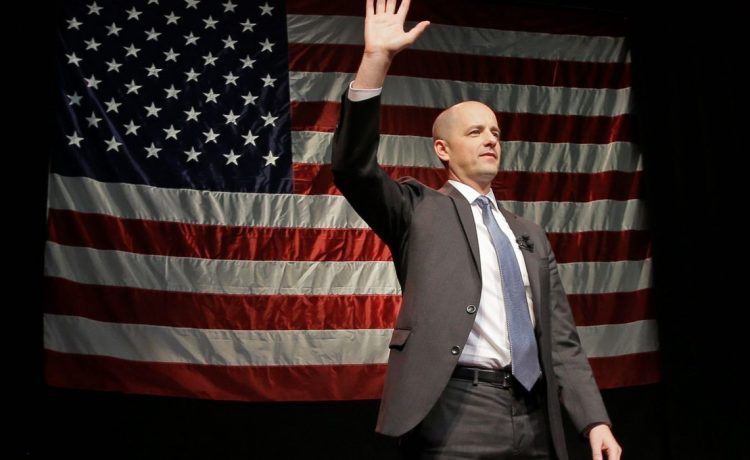 Sen. Mike Lee is poised to win Utah’s GOP Senate primary on Tuesday, which would normally put him on a glide path to November re-election in the deep-red Beehive State.

But Mr. Lee’s path to a third term may become the state’s most competitive Senate race in decades thanks to Evan McMullin, who ran as an independent against President Trump in 2016 and picked up more than 20% of the vote in Utah.

Mr. McMullin is now running against Lee as an independent and has the backing of state Democrats. He is spotlighting Mr. Lee’s alliance with the former president in a bid to defeat Mr. Lee in a state where some voters have grown weary of Mr. Trump.

“This is a very unique race in Utah,” said Jason Perry, director of the Hinckley Institute of Politics at the University of Utah. “This is not a traditional Utah race where you have a Democrat versus a Republican.”

The normally safe Republican seat was moved into the slightly riskier “likely Republican” category by some race analysts, including the University of Virginia’s Crystal Ball, which noted the decision by Democrats to back Mr. McMullin, as well as a recent poll showing Mr. Lee with just a 4-point lead.

“The Lee-McMullin contest seems to have a little more intrigue than your average Safe Republican Senate race,” By Kyle Kondik and J. Miles Coleman wrote in Crystal Ball’s June 15 edition.

Mr. Lee’s campaign is downplaying the latest poll, which was conducted by the Deseret News/Hinckley Institute of Politics and showed Mr. Lee with 41% of the vote and Mr. McMullin with 37% in a November matchup.

“Our campaign is focused on talking about issues, not divisive rhetoric,” Lee campaign spokesman Matt Lusty told the Washington Times. “We’re trying to help Utah families as they struggle with record inflation and soaring gas prices. Our internal numbers show there is very strong support for Senator Lee’s reelection not only in the Republican primary but also in the general election.”

The battle between Mr. Lee and Mr. McMullin will begin in earnest after Tuesday, when Mr. Lee faces off in a primary against former GOP state Rep. Becky Edwards and tech executive Ally Isom. Polls show Mr. Lee with a comfortable lead over both Republican opponents.

Democrats canceled their primary, deciding instead to throw their support behind McMullin, who they hope can oust Mr. Lee with a coalition of Democrats, independents and anti-Trump Republicans.

The move means the November ballot will exclude a Democratic candidate and will pit Mr. Lee, 51, against Mr. McMullin, 46.

Mr. McMullin, who served in the CIA for 10 years, is a former Republican. He launched his political career in 2016 by running as an independent against Mr. Trump, becoming the favored candidate for “Never Trump” Republicans.

Mr. Lee once counted himself among the Never Trump coalition and voted for Mr. McMullin in 2016.

But he came to support Mr. Trump during his four years in the Oval Office, and Mr. Lee even advocated for challenging the election results in the days immediately following the 2020 election.

Mr. Lee ultimately changed his mind and opposed Mr. Trump’s efforts to invalidate Mr. Biden’s win. He was among the Republicans who voted to certify the election in Mr. Biden’s favor.

Mr. McMullin is eager to tie Mr. Lee to Mr. Trump’s bid to stop Congress’ certification of Mr. Biden’s 2020 victory. He seized on text messages leaked to the media in April that show Mr. Lee on Nov. 7, 2020, offering “unequivocal support” to Mr, Trump’s chief of staff, Mark Meadows, “to exhaust every legal and constitutional remedy at your disposal to restore America’s faith in our elections.”

Mr. Lee’s support of the Trump campaign’s election challenge was short lived. He voted to certify Mr. Biden’s win, but Mr. McMullin continues to accuse Mr. Lee of something akin to treason. “Mike Lee conspired directly with the Trump administration to overturn the 2020 election and override the will of the American people,” Mr. McMullin recently tweeted.

Mr. McMullin’s effort to win in Utah faces steep challenges, particularly as he tries to court Democratic and independent voters, while still trying to appeal to disaffected Republicans.

In 2020, Mr. McMullin voted for Joe Biden, which he said was not a commitment to support every decision Mr. Biden made as president. “It’s a vote to defend the republic, take back our government from Vladimir Putin and Trump family corruption, restore decency, and the chance to advance unifying solutions for the country,” he said at the time.

Democrats have not won a statewide race in Utah since 1996 and Mr. McMullin has had to shift leftward since winning the party’s nod.

On Friday, following the Supreme Court ruling overturning Roe v. Wade, Mr. McMullin issued a statement pledging his opposition to states that impose “extreme laws,” such as total bans on abortion, limits on birth control and “criminalization of women in desperate situations.”

Mr. Lee, a former Supreme Court clerk who is staunchly opposed to abortion, was unequivocal in his praise of the high court decision, which will end the federal legalization of abortion and authorizes states with deciding laws governing the legality of the procedure.

“The national nightmare of Roe has ended,” Mr. Lee said.

Mr. McMullin told The Times he’s running against Mr. Lee “because the extremes in our political parties, along with the powerful interests in Washington, have gained far too much influence in our politics.”

He said that if elected, he won’t caucus with either party, which could shut him out of committee membership. Mr. McMullin said he believes Utah, “needs independent leadership in the Senate.”

Republican voters outnumber Democratic voters in the state nearly 4-1, but nearly 30 percent of all voters are unaffiliated with either party.

Mr. Trump remains popular among voters in Utah, but less so than in other red states.

A May 2022 poll pitted Mr. Trump against Sen. Mitt Romney, a Utah Republican who has been one of the party’s most outspoken critics of the former president and who voted to convict him on impeachment charges in January 2021 following the riot at the Capitol that month.

Deseret News and Hinckley Institute of Politics poll found that 51% of Utah voters believed Mr. Romney best represented their political and policy preferences, compared to 37%  who picked Trump. Another 12% picked neither politician.

Mr. Romney, in a snub to Mr. Lee, did not endorse Mr. Lee in the primary, but Mr. Trump did.

Mr. Lee has remained mostly quiet about the stamp of approval from the former president, although he referenced him in a fundraising email earlier this year.

“I am being attacked by my Never Trumper opponent and he is raising millions of dollars to STOP our Conservative campaign,” Mr. Lee pitched to donors.