The Great Days > News > New coalition fights Biden’s plan for LGBTQ rewrite of education rights: ‘We will block this’
News

New coalition fights Biden’s plan for LGBTQ rewrite of education rights: ‘We will block this’ 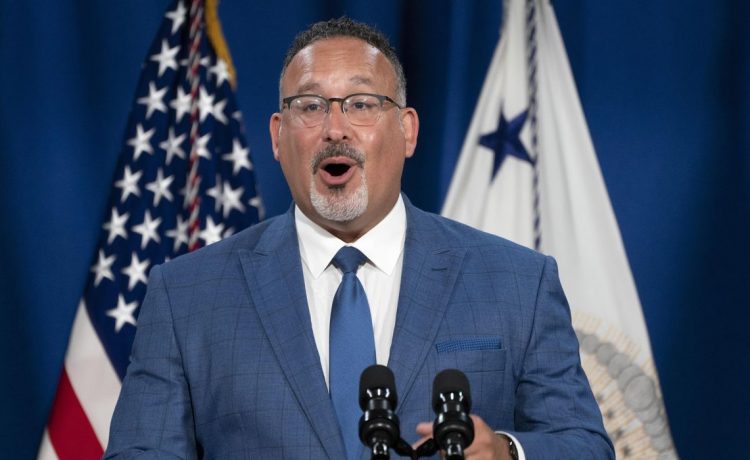 More than 140 advocacy groups formed a new coalition to stop the Biden administration’s proposed rewrite of regulations banning sex discrimination in education, saying the new LGBTQ-slant to the rules will harm kids and limit parental rights.

The fight is over defining sex based on biology or expanding the definition to include sexual orientation and gender identity.

The Biden administration says a new, broader definition of sex is needed to protect LGBTQ students, but opponents warn it will curtail free speech and diminish due process for students on college campuses.

“We will block this. It’s just a matter of at which stage of the process,” Edward Bartlett, chairman of the Stop Abusive and Violent Environments, said ahead of a rally Thursday in front of the Education Department in Washington. “I formerly worked in the Department of Health and Human Services in a regulatory role. I know how the process works from the inside out. So there are many ways to stop this, and we’ll just see how it plays out.”

He organized the rally to protest the proposed new rule and mark the formation of the Title IX Network, which includes more than 140 groups joining the cause.

The Biden administration proposed changes this summer to the regulations that implement Title IX, which bans sex discrimination in education. A public comment period on the regulation is open until Sept. 12, 2022.

“As we celebrate the 50th anniversary of this landmark law, our proposed changes will allow us to continue that progress and ensure all our nation’s students — no matter where they live, who they are, or whom they love — can learn, grow, and thrive in school,” said Education Secretary Miguel Cardona in a June statement. “We welcome public comment on these critical regulations so we can further the Biden-Harris administration’s mission of creating educational environments free from sex discrimination and sexual violence.”

Mr. Bartlett fears the rules will lead to pronoun mandates at public institutions, where students and teachers may face sexual harassment complaints for failing to use the preferred pronouns and language of others.

Members of Title IX Network include litigators prepared to duke it out in courts and grassroots groups ready to engage with voters before November. Speakers at the rally hailed from groups such as the National Association of Scholars, the civil rights nonprofit New Civil Liberties Alliance and the Independent Women’s Forum.

The coalition’s first step in the battle, however, involves flooding the Education Department with comments to oppose the regulations.

At the rally, Center for Equal Opportunity chairman Linda Chavez said she wanted to see thousands of Americans tell the Biden administration to stop in its tracks.

“I’d like to see 250,000 comments on the secretary of education’s proposed regulations,” Ms. Chavez said. “Only by speaking out can we fight this.”