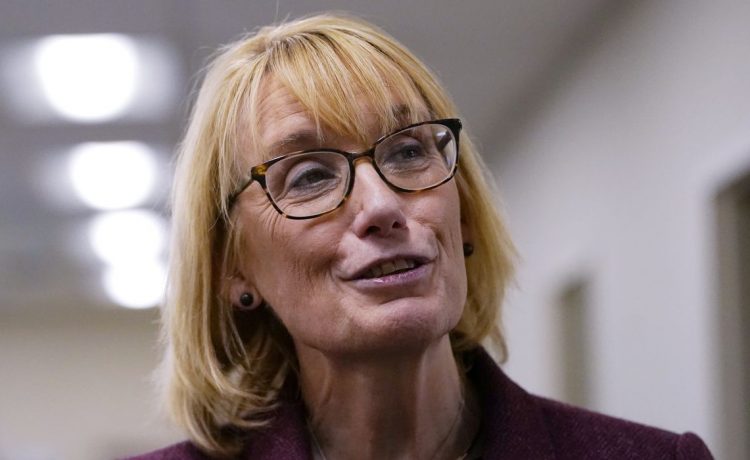 There are warning lights blinking for Democrats in New Hampshire, where the Senate race between Republican challenger Don Bolduc and incumbent Democrat Maggie Hassan is presenting a potential pick-up opportunity for the GOP in its bid to retake the upper chamber.

Mrs. Hassan, who won the seat in 2016 by a little more than 1,000 votes, has maintained an average 5-point lead in the polls, but there are indicators that Mr. Bolduc could close the gap before Election Day — despite Republicans slashing ad buys for the retired Army brigadier general.

Returning Mrs. Hassan to Washington is critical to Democrats’ hopes of hanging on to the Senate.

She has raised more money and outperformed her challenger in polls. But insiders say poll numbers are likely misleading because Republicans divided by a tough primary battle are expected to reunite down the home stretch.

“I do think a high percentage of the Republicans who are currently not behind Bolduc will come around and vote for him when they actually get to the polls,” said Andrew Smith, director of the University of New Hampshire’s Survey Center. “We certainly saw this with the same groups of people here in New Hampshire with Donald Trump back in 2016 when he came close to winning in New Hampshire.”

The Hassan campaign appears to agree that polling could be skewed in its favor, as Democrats have seen a national trend in recent elections in which polls have repeatedly underestimated GOP candidates.

A leaked campaign email to donors last month published by Axios showed the Hassan campaign sounding the alarm over “sugar-coated” polls and cautioned that Mr. Bolduc “is quickly consolidating the Republican base and is rapidly making up ground against Senator Hassan.”

Scaring donors into ponying up more cash is a common campaign tactic, but the warnings may very well turn out to be true, even if Senate Republicans may not believe it. Their campaign arm, the National Republican Senatorial Committee, withdrew millions of dollars in ad buys for Mr. Bolduc last week to redirect the funds toward more competitive races.

Still, other national Republicans are embracing the far-right candidate with open checkbooks to boost his cash-strapped campaign, even after he bested their preferred primary candidate last month who was more moderate, Chuck Morse.

A Granite State poll conducted last month by Mr. Smith and his university colleagues showed Mrs. Hassan leading Mr. Bolduc 49-41. The gap was attributed to her “near universal support” among Democrats at 98%, contrary to Republicans, 83% of which backed Mr. Bolduc and 3% sided with Mrs. Hassan.

The most recent survey at the end of September from Trafalgar Group showed Mrs. Hassan with a 3-point lead, within the margin of error.

Forecasters like the nonpartisan Cook Political Report rate the race as “Lean Democratic.”

“There is a lot of skepticism among Democrats across the country that even if the polls show [a lead, campaigns] can’t take it for granted,” said Jessica Taylor of the Cook Political Report. “You don’t want your voters and donors to take it for granted that you’re going to win and move their focus over to other races.”

Last week, Mrs. Hassan pulled out of a previously scheduled debate, according to the New Hampshire Journal. Skirting debates has been part of a trend by Democrats in competitive races this cycle to avoid exposing themselves to criticism.

The Hassan campaign did not respond to requests for comment.

The Bolduc campaign chalked up the remaining split among Republican voters to the “bruising primary” that ended just weeks ago.

“You have primaries that are late, and now the crew is coming together,” Mr. Wiley said of GOP voters.

Since becoming the nominee, Mr. Bolduc has sought to distance himself from prior statements that the 2020 election was illegitimate, offering instead vaguer answers on the subject.

Mr. Wiley sought to put the issue to bed, saying Mr. Bolduc’s stance is that while the race “wasn’t stolen, there have been numerous instances of irregularities.”

He said there is no concern Mr. Bolduc’s latest position will alienate far-right supporters who chose him over his more moderate GOP opponent.