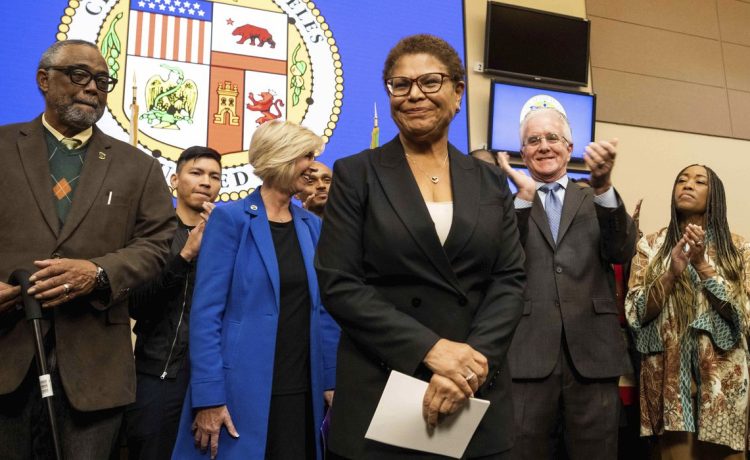 In her first act in office as Los Angeles mayor, Karen Bass signed a declaration of a state of emergency amid the city’s homelessness Monday.

“I just declared a state of emergency on homelessness to unlock every tool and authority at our disposal to bring unhoused Angelenos inside. This is a matter of life and death, and that’s exactly how my administration will treat it,” Ms. Bass said on Twitter.

Mayor Bass continued in an announcement on her website: “Today, on my first day in office, we hit the ground running, with a sea change in how the city tackles homelessness.”

Ms. Bass will also have “the power to lift rules and regulations that slow or prevent the building of permanent and temporary housing for the unhoused; to expedite contracts that prioritize bringing unhoused Angelenos inside; and that allow the city to acquire rooms, properties and land for housing for Angelenos in need,” according to the mayor’s announcement.

Although she legally has the option, Ms. Bass will not directly commandeer land use for the homeless.

“You’re going to end up tied up in court forever. I’m looking for the quickest way to do this,” Ms. Bass told the Times.

The mayoral announcement also listed key performance indicators for policies being taken as part of the state of emergency, including:

The declaration will sunset in six months if it’s not renewed. The initial declaration also requires approval from the Los Angeles City Council; council approval must be renewed every 30 days.

“One thing that a state of emergency in the city provides is different procurement processes, for example. So it’d be much easier for us to acquire housing or to acquire the pieces that are needed and so forth,” Mr. Krekorian told the Times.

Advocates noted the benefits of centralizing decision-making power when it comes to mitigating homelessness.

“The city’s approach to homelessness has become more piecemeal and politicized, and this state of emergency can leverage the power of the executive branch to make sustainable improvements to our service system and dramatically increase the production of desperately needed housing,” Jennifer Hark Dietz, chief executive of the charity People Assisting the Homeless, told the Times.