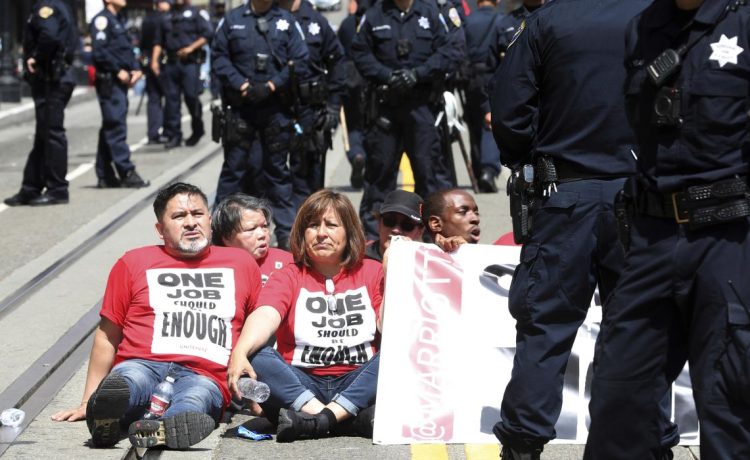 The National Labor Relations Board has proposed a dramatic overhaul of the franchise business model by reclassifying workers at restaurant or hotel chains as employees of the parent company, a move that would make it easier to unionize across the entire brand.

Opponents warn that the change will devastate an industry employing 8.2 million people and contributing roughly 7% to the nation’s overall economic output.

“This is going to hurt a lot of people, from someone coming out of the corporate environment looking to be an independent business owner to someone looking to start their career with an entry-level job to consumers who will have to pay $15 for a hamburger,” said Frank Caperino, who teaches franchise management at San Diego State University and owns multiple franchises.

Proponents of the new rule say it empowers workers to force change if they are being treated unfairly. That’s because the parent has more power than the franchisee to change workplace policies and make concessions.

“In an economy where employment relationships are increasingly complex, the board must ensure that its legal rules for deciding which employers should engage in collective bargaining serve the goals of the National Labor Relations Act,” NLRB Chairwoman Lauren McFerran said in a statement.

Reclassifying franchise workers would make both the large parent company and the franchisee jointly responsible for labor-law violations. It would also force the parent company to bargain with employees of a local franchise if they decide to unionize.

Parent companies, known as franchisors, say that’s unfair because they do not have direct control over people working their franchises. Employment issues such as pay hours, benefits, and scheduling are all managed at the local level by the franchise owner.

The NLRB’s request for public comment ended in December. Roughly 2,200 individuals and businesses weighed in with nearly identical comments criticizing the proposal before it heads back to the NLRB for final approval, likely in early 2023.

The International Franchise Association (IFA), which lobbies for both franchisors and franchisees, said the proposal will “wreak havoc on the franchise business model, its millions of employees, and the consuming public.”

Franchisees also object to the proposal, saying it makes them mere employees of the parent company rather than independent entrepreneurs.

They warn that it will force franchises to increase prices to cover the expected increase in legal expenses. It is estimated the rule will cost the franchisors roughly $4.9 million per hour in combined employment costs and new resources to negotiate labor and bargaining claims.

In a failed labor discrimination suit filed against McDonald’s, the American Civil Liberties Union argued that the franchising model shields large companies from accountability for misdeeds committed at local franchises where they do wield some control.

“Decisions like this allow corporate entities that pull the strings to continue to say ‘not it’ and ignore when workers suffer from labor law violations that result from systemic gaps and defects in workplace policies,” the ACLU said in a statement after the lawsuit was dismissed last year.

Franchises and their owners push back on that claim, saying the rule will halt a major revenue generator. The nation’s roughly 775,000 franchises are projected to pump $826.6 billion into the U.S. economy, up from $720.4. billion in 2017, according to FRANdata, which researchers the franchise industry

“There are hundreds of billions in franchisee equity and ownership around the country, and if the NLRB says law-abiding franchise owners don’t run legitimately independent businesses, they are wiping out billions of franchise equity by fiat,” Michael Layman, senior vice president of government relations for the IFA, told The Washington Times.

Elected officials in Washington also have inserted themselves into the battle. A coalition of Republican lawmakers recently sent a letter to the NLRB urging it to reconsider the rule, saying it would have a “negative effect” on millions of workers.

In response, a coalition of Democratic lawmakers sent a letter arguing the rule is necessary to stop large corporations from hiding behind small business owners to evade their legal obligations.

The rules dictating whether a parent company is a joint employer have changed over the years, depending on the political makeup of the NLRB. Although the NLRB is an independent agency, its board members are picked by the president.

In 2015, when the board was controlled by President Obama’s appointees, it changed the rules so that parent companies could be considered joint employers if they controlled certain working conditions such as firing or disciplining employees.

Under President Trump, the board undid that change. At the time, the Republican-led board restored the standard of control back to the franchisee, saying the parent company could only be a joint employer if they had “substantial” control over employment conditions.