Nonprofit seeks to support those affected by incarceration 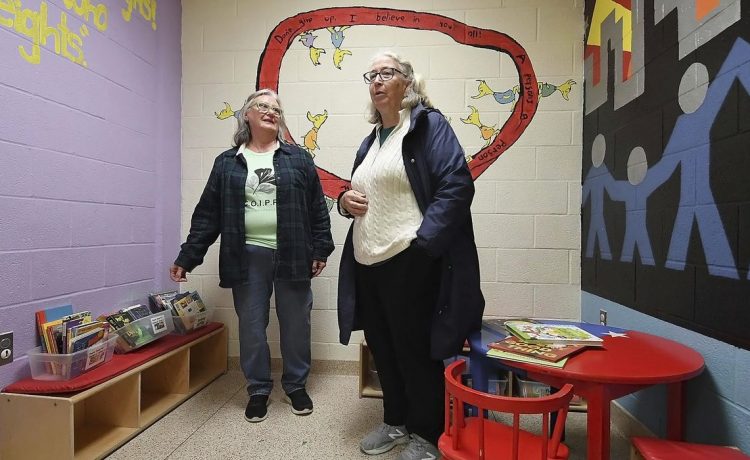 The door to the visitation room swung open, and a boy not more than 3 feet tall toddled behind his mom and big siblings, bundled in a big winter jacket.

With a goofy smile stretched wide across his cheeks, he made a beeline to the front left corner of the lobby.

There, inside a little inlet cut into the wall, the cinder block is splashed with yellows, blues, reds and purples. Books are piled on almost every surface.

Shirley White, an administrative specialist with the detention center who helped create the “book nook,” watched the boy run over. Her face lit up.

White is a volunteer with the Children of Incarcerated Parents Partnership, a Frederick-based nonprofit that, for almost two decades, has supported families in Frederick County affected by the prison system.

The organization, known as COIPP, helps incarcerated people stay close to their children while they’re in prison or jail.

It makes sure their children have new clothes and shoes for school every year, and keeps caregivers well stocked with paper towels, diapers, cleaning products and gift cards.

For many COIPP volunteers, the mission extends beyond the physical needs of children and their caregivers. They bring comfort and light to families, and give children the chance to be children during what is likely a traumatic time.

Outside the detention center on a recent afternoon, as rain dribbled down, volunteers passed out shoes, diapers and other supplies to families visiting loved ones inside.

Pat Einhorn, who sits on the Children’s Activities Committee at COIPP, bustled about, rain dripping from a black baseball cap. Earlier, she described the nonprofit’s impact in an interview with The Frederick News-Post.

Shari Ostrow Scher, COIPP’s executive director, founded the nonprofit in about 2005, while the supervisor of early childhood education at the Frederick County Board of Education.

After a long career in education, Ostrow Scher deeply understood the effect trauma can have on a child’s development.

But starting COIPP was also personal for her. When she was a teenager, her father was incarcerated.

“The issues are the same. The stigma, the embarrassment, the finances, the fear,” she continued. “It’s just loss after loss. And that’s all part of trauma.”

Even though America’s state and federal prison populations declined during the pandemic, the country still incarcerates a larger share of its population than any other country for which data are available.

Nationwide, Black Americans are far more likely to be arrested and imprisoned than white Americans. In 2018, more than 70% of Maryland’s prison population was Black, compared to 31% of the state’s overall population, according to a 2019 Justice Policy Institute report.

But prison statistics don’t capture the reach of mass incarceration.

Men – often the primary breadwinners in their families – make up about 90% of the country’s jail and prison populations. And having a parent in prison means a child is more likely to have health problems, learning disabilities, anxiety and developmental delays, among other challenges.

“We know this from the research,” Ostrow Scher said. “When someone goes to jail, whether you like their crime or not, financially, the family often falls apart.”

When her father was incarcerated, her mother had a breakdown, Ostrow Scher said. Her sister fell apart. Then, when her dad was released, he struggled to find work.

What happened to him was meant to stay a secret within her family, Ostrow Scher said. It wasn’t until he died, and her childhood neighbors came to sit shiva – a Jewish period of mourning – with her family, that she realized everyone had known all along.

It was lonely, she said. “I thought I was the only one on Earth.”

Ostrow Scher started COIPP, in part, so that no child would ever feel the way she had when her father was imprisoned. She would have benefited enormously from a similar group, she said.

COIPP is now a 501(c)(3) nonprofit with a 13-member board of directors and a network of about 70 volunteers. Last year, it served about 745 people in ways big and small, Ostrow Scher said.

The nonprofit holds regular gatherings for children, providing them with a safe, welcoming environment, where they can run around and be silly without worrying about someone asking where their mom or dad are.

For caregivers, COIPP offers a support group to share resources and vent to others who get it.

Like Ostrow Scher, many volunteers are retired educators. While some had experience with incarcerated family members when they were growing up, others – like Sally Selby, a retired middle school English teacher and principal – did not.

“I’m just a believer that all kids need books,” she said. “All kinds of books.”

Another volunteer, Larissa Metzger, gets emotional when she talks about what the organization’s book nook meant to her children when their father was incarcerated at the detention center.

They were nervous about visiting him, but – as huge readers – seeing a miniature library inside the facility made them more comfortable.

She helps with the caregiver support group. Sometimes, it feels like she gets more out of monthly meetings than participants do.

Since the group started during the pandemic, it has mostly been virtual. But its members – women of different ages, upbringings and economic backgrounds – have developed close bonds, Metzger said.

“We celebrate when someone has a baby, or a child gets an award,” she said. “It’s really something that I honestly, wholeheartedly feel that everyone is looking forward to once a month.”

Ostrow Scher doesn’t believe anybody should be judged for the “worst thing they’ve ever done.” But children, especially, shouldn’t be judged for having an incarcerated parent, she said.

“They just exist,” she said. “Regardless of what your political view is about anything, we should be there to lend a hand to the kids.”

“Many of the children, we know, just need support. They need connection, so they can move on with their lives and be successful,” she continued. “And they will be, if they get the right support from their community.”

On a recent afternoon, John Blaskowski stood outside the detention center with other COIPP volunteers, wearing a sea foam green T-shirt – the organization’s characteristic color.

A few years ago, he was on the other side of the facility’s walls.

While incarcerated, he participated in a parenting class COIPP offered at the center. It helped him reconnect with his children and other people in his life.

Now, he helps lead a similar class at Wells House in Frederick, a substance use recovery facility, where he is a cook.

A few feet away from Blaskowski, another volunteer reached out to a parent, handing her tiny sneakers for her son.

“These are sixes,” she said, “but he can grow into them.”