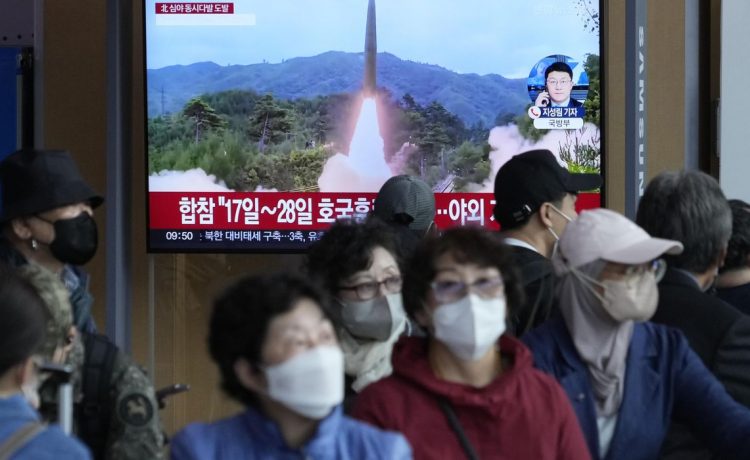 SEOUL, South Korea (AP) — North Korea fired about 100 more artillery shells toward the sea Wednesday in response to South Korean live-firing drills at border areas as the rivals accuse each other of dialing up tensions on the Korean Peninsula with weapons tests.

The drills conducted by both sides come amid heightened animosities over recent North Korean missile tests that it calls simulated nuclear attacks on South Korean and U.S. targets.

Both days, the North Korean shells landed in the northern parts of the maritime buffer zones the two Koreas created off their eastern and western coasts as part of agreements they made in 2018 to reduce tensions, according to the South’s Joint Chiefs of Staff.

North Korea also fired hundreds of shells at the buffer zones Friday in its most significant direct violation of the 2018 agreement.

North Korea’s military said the launches were a warning against what it called provocative South Korean artillery firing drills along the border earlier this week.

“Our army strongly warns the enemy forces to immediately stop the highly irritating provocative act in the frontline areas,” an unidentified spokesperson at the General Staff of the North’s Korean People’s Army said in a statement Wednesday.

South Korea’s Defense Ministry said it conducted artillery drills at land border areas as part of its annual military exercises. But it said its drills didn’t violate the 2018 accord because its shells didn’t land in the buffer zones.

South Korea’s Joint Chiefs of Staff warned North Korea to immediately stop provocations that threaten peace and stability on the Korean Peninsula. It added that it is boosting its military readiness and, in coordination with the United States, is closely monitoring North Korea’s moves.

There were no reports of violence between the two Koreas. But animosities could persist as North Korea will likely react to South Korea’s ongoing annual “Hoguk” field exercises with its own weapons tests. South Korean officials said the ”Hoguk” drills are aimed at improving a military readiness against North Korean nuclear and missile threats and involve an unspecified number of U.S. troops.

North Korea views regular South Korea-U.S. military training as an invasion rehearsal. It said its recent barrage of missile tests was meant to issue a warning to one of the allies’ earlier exercises involving a U.S. aircraft carrier.

In parts of the “Hoguk” drills open to the media, South Korean and U.S. troops built floating bridges on a river southeast of Seoul to let tanks and other armored vehicles move over them. South Korea’s army said Wednesday’s training was meant to deal with a hypothetical enemy attack that would leave some of the bridges over the river destroyed.

“It’s so far been extremely successful and demonstrated the strength of the ROK-U.S. alliance,” said Capt. Sean Kasprisin, a company commander at the U.S. military, using the initials of South Korea’s official name, the Republic of Korea. “We are definitely stronger together with the two nations.”

From Oct. 31 to Nov. 4, South Korea and the United States will also hold combined air force drills involving some 240 warplanes, including F-35 fighters operated by both nations. The drills are designed to inspect the two countries’ joint operation capabilities and improve combat readiness, the South Korean military said Tuesday.

China’s Foreign Ministry spokesperson, Wang Wenbin, said at a briefing Wednesday that Beijing hopes all relevant countries would keep trying to look for a political settlement to ease tensions on the Korean Peninsula.

North Korea has test-launched 15 missiles since it resumed testing activities on Sept. 25. One of them was an intermediate-range ballistic missile that flew over Japan and demonstrated a range capable of reaching the Pacific U.S. territory of Guam and beyond.

Some foreign experts say North Korean leader Kim Jong Un would eventually aim to use his expanded weapons arsenal to pressure the United States and others to accept his country as a legitimate nuclear state and lift economic sanctions on the North.

The North’s artillery tests draw less outside attention than its missile launches. But its forward-deployed long-range artillery guns pose a serious security threat to the capital, Seoul, about 40 to 50 kilometers (25 to 30 miles) from the border with North Korea.