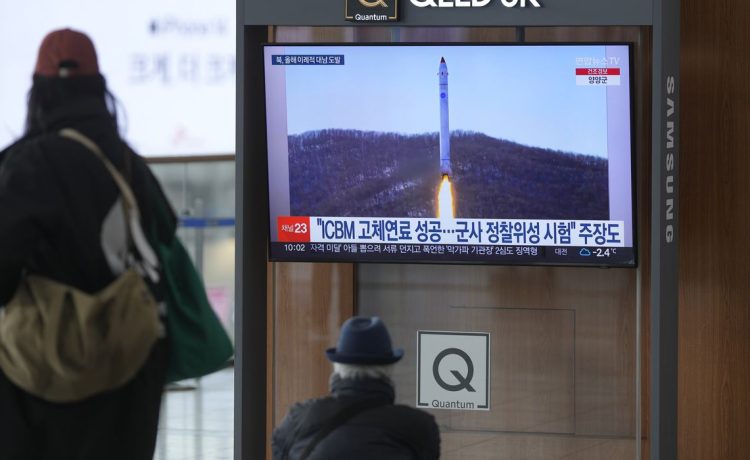 SEOUL — In the latest ripple to spread outward from North Korea’s drone intrusion into South Korea’s air space last week, it was revealed today that the South Korean capital’s most sensitive airspace had been violated.

Presidential and defence officials separately admitted today that one of the five drones which penetrated South Korean airspace on December 26 flew through the 2.2 mile-radius air security zone surrounding the South Korean presidential office at Yongsan. Previously, officials had only said that a drone had hovered over northern Seoul.
And it gets worse.

In May, newly-elected President Yoon Suk Yeol relocated the presidential offices from the traditional Blue House to the Ministry of National Defense compound adjacent to the vast Yongsan Garrison in east-central Seoul. Yongsan was for decades, the headquarters of U.S. Forces Korea.

Though most American military units have relocated to a new base 40 miles south of Seoul outside the port of Pyeongtaek, a skeleton U.S. presence is still at Yongsan.

According to a U.S. military source, a “fluctuating population” of some 500 Americans, including embassy staff, troops and contractors remain. And one chunk of the largely-abandoned base is occupied by a hotel for U.S. personnel and their families visiting Seoul.

The North Korean drones that intruded last week are believed to have been reconnaissance vehicles. Regardless of type, they demonstrated that Pyongyang’s drones can reach a range of ultra-high-value targets, whether the mission be camera/video spying, signals interception, personnel assassination or facility destruction.

“This was quite a score for the North Koreans,” said Alex Neill, an independent security consultant in Singapore.

Given that the intrusion had also briefly shut down Seoul’s airports – making drones a potential weapon of economic warfare – multiple scenarios are open to North Korean planners.

“This episode was not just a grave breach of national security and an armistice violation, it is unnerving,” Daniel Pinkston, a Seoul-based international relations professor with Troy University, said in an interview. “There is no innocuous or benign explanation, this was a deliberate penetration.”

If Seoul does not erect defenses, the North has a cheap, low-risk, asset to spread mayhem – including WMD.

The South Korean military is under pressure. The defense minister has been censured by Mr. Yoon, and the military has offered a public apology and initiated anti-drone drills using jamming devices, KA-1 light attack aircraft and 500MD multi-role helicopters.

The presidency’s relocation stemmed from Mr. Yoon’s election vow to shift from “imperial” quarters to a more workaday, public-facing location. Critics suggested Mr. Yoon was influenced in part by shamans who believe the Blue House is infected by negative energy known here as pengsu.

Certainly, multiple South Korean presidents have suffered dire fates. One was exiled to Hawaii, another was assassinated and four were jailed after they left office.

Yongsan also had negative associations: After World War II, the U.S. Army took it over from its despised former occupant, the Japanese Imperial Army. In subsequent decades, as Seoul expanded around the base, and as South Korea surged up the economic development ladder, a giant U.S. base in the heart of the capital looked increasingly intrusive.

U.S. Forces Korea’s giant new headquarters – on a marsh inland from Pyeongtaek – was ostensibly chosen for its large size and low cost. But while GIs may bemoan Pyeongtaek’s lack of after-hours night life, strategic planners should be gleeful.

It joins two major U.S. air bases on Korea’s Yellow Sea Coast: Kunsan and Osan. All benefit from proximity to the South Korean naval base at Pyeongtaek.

Tactically, these locations are beyond the range of North Korea’s long-range tube artillery and their grouping may benefit from shared defenses against aerial threats — such as short-range drones.

And their location makes them ideal for monitoring Chinese naval and aerial traffic off the peninsula’s west coast.

Naval bases, as well as aircraft-carrier shipyards, perch on China’s Yellow Sea coast. Chinese warships, before entering the wider Pacific, must pass the U.S.-aligned “First Island Chain.” That obstacle extends from Okinawa in the northeast, through Taiwan in the center, to the Philippines in the southwest.

The Yellow Sea “Is an all-round very important piece of sea space and the Korean Peninsula offers overwatch across it, keeping an eye on China’s ship-building capabilities and its testing of those platforms,” said Mr. Neill.