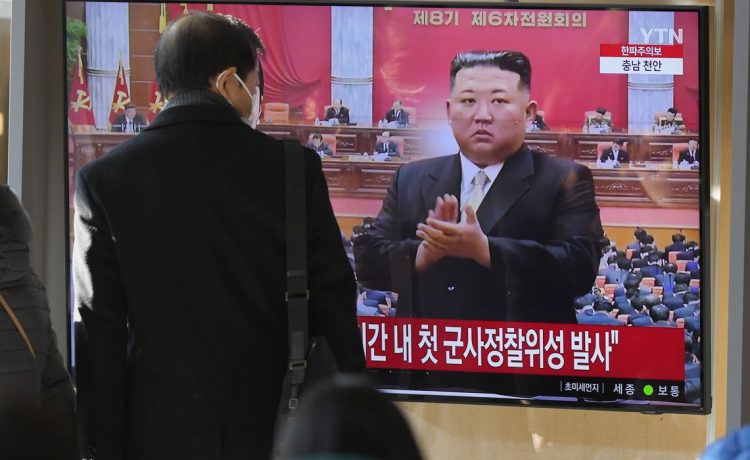 SEOUL | North Korea’s 2023 is already looking like a re-run of 2022, as Pyongyang test-fired missiles on New Year’s Eve and New Year’s Day and vowed to increase its nuclear arsenal.

According to North Korean media monitored by agencies in Seoul, North Korean leader Kim Jong Un told a meeting of his ruling Workers Party of the need for an “exponential” increase in atomic arms, as well as a new intercontinental ballistic missile, or ICBM. After a string of weapons tests in 2022, U.S. and South Korean officials have been braced for what they fear will be the North’s first nuclear weapons test in six years.

Separately,South Korea’s Joint Chiefs of Staff said that North Korea test-fired one ballistic missile on Sunday, following the launch of three the previous day. It is not clear whether those projectiles were fired from a new, nuclear-capable 600mm multiple-launch rocket system referred to by Pyongyang‘s state media.

In his remarks to top security officials late last week, Mr. Kim demanded “redoubled efforts to overwhelmingly beef up the military muscle,” calling the U.S. a “hostile force” and South Korea an “undoubted enemy.” He spoke of “the necessity of mass-producing tactical nuclear weapons” and “an exponential increase of the country’s nuclear arsenal.”

“Our nuclear force considers it as the first mission to deter war and safeguard peace and stability and, however, if it fails to deter, it will carry out the second mission, which will not be for defense,” he added, according to the South Korean reports.

The mission of the new ICBM is a “quick nuclear counter-strike.” North Korea first tested an ICBM with the range to hit the U.S. mainland in 2017, setting off a fierce standoff with the Trump administration.

In a statement, Seoul’s Unification Ministry slammed the North’s “obsession” with weapons of mass destruction, which it said came at the expense of the welfare of ordinary North Koreans..

But Mr. Kim is not alone in boosting his forces: Northeast Asia is engaged in an accelerating arms race, with U.S. allies and adversaries bulking up to unprecedented levels.

China continues to add capabilities in all military domains, while militarizing South China Sea reefs and islets. Taiwan last week announced that it was extending conscription times for military recruits, and is set to receive $10 billion under a new military aid package just approved in Washington.

The government of Japanese Prime Minister Fumio Kishida has vowed to double its defense budget by 2028, and on December 16, revealed plans to acquire a cruise missile “counterstrike” capability — the latest dramatic shift away from its constitutionally-mandated pacifist defense policy.

And last week, South Korea’s military asked for a more than 6% increase in its defense budget for the next five years, and also tested a solid-propellant satellite launch vehicle.

Mr. Kim accused Seoul of being “hell-bent on an imprudent and dangerous arms buildup.”Even so, 2022 stood out as his busiest year of missile tests, ever.

North Korea launched not only some 70 ballistic missiles of various types into its skies and off its coasts, it also test-fired cruise missiles and tactical multiple-launch rocket systems. Pyongyang also claims to have tested a hypersonic missile with a variable glide path and a satellite launch vehicle. It also tested unconventional, survivable systems – such as a missile fired from beneath the surface of a lake, and another fired from the flatbed of a train.

North Korea is banned by U.N. Security Council resolutions from testing ballistic missiles, but routinely ignores the ban. Now, diplomatic pressures on Pyongyang may be easing.

In 2022, Russia and China — which had backed prior resolutions against Pyongyang’s weapons programs — blocked efforts by the Biden administration for further action at the U.N.

Clearly, it needs to credibly test missile technologies, and to show off its deterrent to potential enemies. It also uses missile tests as a counter to US-South Korea drills, and South Korean arms developments. Moreover, changes to the North’s strategic doctrine announced in 2022 – under which missile units would independently initiate launches if the Kim regime’s leadership is taken out – calls for new weapons systems, which must themselves be stress tested.

Still, North Korea did not conduct a nuclear test in 2022, defying widespread predictions. Many analysts say Beijing, spooked by Moscow’s war in Ukraine and loath to give the U.S. a reason to deploy more assets to Indo-Pacific, may have warned Mr. Kim against the move.

This weekend’s developments come one week after the North opened a new front in the peninsula’s war of nerves.

On December 26, five North Korean drones crossed the DMZ — the first such intrusion since 2017 — and attempts by South Korean air defenses to down the drones failed. In response, President Yoon Suk Yeol ordered the South Korean military to deploy two or three drones into the North for every drone the North sends South.

Even so, the vulnerability lies in the South, where the drone incursions would prove far more disruptive compared to the isolated North.