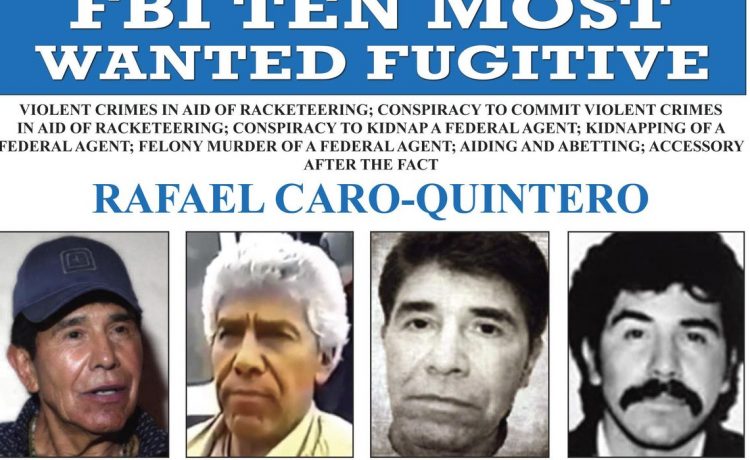 An infamous drug trafficker and convicted killer who occupied a spot on the FBI’s top 10 most wanted list was arrested by Mexican naval forces on Friday.

Rafael Caro-Quintero, who is considered a founder of the Guadalajara cartel, was captured by Mexican marines after a search dog found him hiding in the brush near the town of San Simon in the country’s northwestern state of Sinaloa, according to multiple reports.

The drug lord was a major player in cocaine, marijuana and heroin trafficking into the U.S. in the 1970s, and is notorious in U.S. law enforcement circles for orchestrating the kidnapping, torture and killing of DEA Special Agent Enrique “Kiki” Camarena in 1985.

Camarena’s death came after a DEA raid destroyed millions of dollars worth of marijuana owned by the Guadalajara cartel in 1984.

Camarena’s murder was a low point in U.S.-Mexico relations, and caused the border between the two nations to be closed for several days. The Louisville Courier-Journal reported that the public pressure inside Mexico became so high that the cartel eventually returned Mr. Caramena’s body to U.S. authorities.

The capture and killing of Camarena was serialized in season 4 of the Netflix show “Narcos.”

“There is no hiding place for anyone who kidnaps, tortures, and murders American law enforcement. We are deeply grateful to Mexican authorities for their capture and arrest of Rafael Caro-Quintero,” U.S. Attorney General Merrick Garland said in a Friday statement. “Today’s arrest is the culmination of tireless work by DEA and their Mexican partners to bring Caro-Quintero to justice for his alleged crimes, including the torture and execution of DEA Special Agent Enrique ‘Kiki’ Camarena.”

The attorney general concluded by saying that the U.S. will immediately seek Caro-Quintero’s extradition to the states.

The cartel leader was tried and convicted in Mexico for Mr. Camarena’s death in 1985, but in 2013 his 40-year sentence was overturned on a technicality by an appeals court. The nation’s Supreme Court would later uphold the sentence, but by that time Mr. Caro-Quintero had vanished.

He resumed drug trafficking and turf battles as a member of the Sinaloa cartel in the Mexican state of Sonora, which borders Arizona.

During the operation to capture Caro-Quintero, a helicopter with the Mexican Navy crashed, killing 14 marines. Authorities couldn’t speak on the cause of the crash at the time and said it was under investigation.

— This story was based in part on wire services