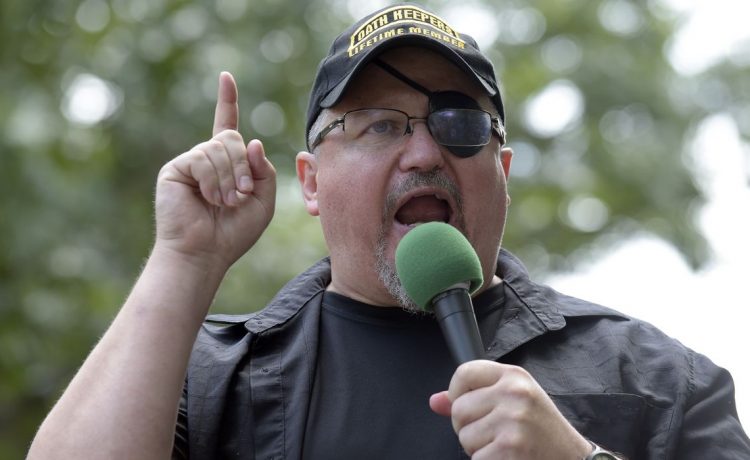 Oath Keepers founder Stewart Rhodes told a member of the extremist group before the 2020 election that he had a contact in the Secret Service, a witness testified Thursday in Rhodes’ Capitol riot trial.

John Zimmerman, who was part of the North Carolina chapter, told jurors that Rhodes claimed to have a Secret Service agent’s number and to have spoken with the agent about the logistics of a September 2020 rally that then-President Donald Trump held in Fayetteville, North Carolina.

The claim came on the third day of testimony in the case against Rhodes and four others charged with seditious conspiracy for what authorities have described as a detailed, drawn-out plot to stop the transfer of power from Trump to Democrat Joe Biden, who won the election.

Zimmerman could not say for sure that Rhodes was speaking to someone with the Secret Service – only that Rhodes told him he was – and it was not clear what they were discussing. Zimmerman said Rhodes wanted to find out the “parameters” that the Oath Keepers could operate under during the election-year rally.

The significance of the detail in the government’s case is unclear. Rhodes, from Granbury Texas, and and the others are accused of spending weeks plotting to use violence in a desperate campaign to keep Trump in the White House.

Trump’s potential ties to extremist groups have been a focus of the House committee investigating the riot at the Capitol on Jan. 6, 2021.

Another Oath Keeper expected to testify against Rhodes has claimed that after the riot, Rhodes phoned someone seemingly close to Trump and made a request: tell Trump to call on militia groups to fight to keep him in power. Authorities have not identified that person; Rhodes’ lawyer says the call never happened.

Secret Service spokesman Anthony Guglielmi said it is not uncommon for “protest groups” to contact the agency with logistical questions about rallies. He noted that firearms are always prohibited within restricted areas being secured by the agency. Guglielmi said he is not aware of any contact between Rhodes and an agency representative but would not be surprised if Rhodes said he had contacted the Secret Service before the North Carolina event.

“I don’t have any way to track that down without some more information,” the spokesman said.

The others are trial are Thomas Caldwell of Berryville, Virginia; Kenneth Harrelson of Titusville, Florida; Jessica Watkins of Woodstock, Ohio; and Kelly Meggs of Dunnellon, Florida. The trial is expected to last several weeks.

Authorities say the Oath Keepers organized paramilitary training and stashed weapons with “quick reaction force” teams at a Virginia hotel in case they were needed before members stormed the Capitol alongside hundreds of other Trump supporters.

Jurors also heard testimony from a man who secretly recorded a Nov. 9, 2020, conference call held by Rhodes in which the leader rallied his followers to prepare for violence and go to Washington.

The man, Abdullah Rasheed, said he began recording the call with hundreds of Oath Keepers members because Rhodes’ rhetoric made it sound like “we were going to war with the United States government.”

Rasheed said he tried to get in touch with authorities, including the U.S. Capitol Police and the FBI, about the call but that no one called him back until “after it all happened.” An FBI agent has testified that the bureau received a tip about the call in November 2020, and when asked if the FBI ever conducted an interview, he said “not to my knowledge.” The man contacted the FBI again in March 2021, was interviewed and gave authorities the recording of the call.

Rhodes’ lawyers have said the Oath Keepers leader will testify that his actions leading up to Jan. 6 were in preparation for orders he believed were coming from Trump, but never did. Rhodes has said he believed Trump was going to invoke the Insurrection Act and call up a militia to support his bid to hold power.

The defense says the Oath Keepers often set up quick reaction forces for events but they were only to be used to protect against violence from antifa activists or in the event Trump invoked the Insurrection Act.

Zimmerman, the former Oath Keeper from North Carolina, described getting a quick reaction force ready for the “Million MAGA March” in Washington on Nov. 14, 2020, in case Trump invoked the Insurrection Act. Thousands of Trump supporters that day gathered at Freedom Plaza along Pennsylvania Avenue in Washington to rally behind Trump’s false election claims.

Zimmerman told jurors that the Oath Keepers stashed at least a dozen rifles and several handguns in his van parked at Arlington National Cemetery to serve as the quick reaction force. He said they never took the guns into Washington.

Zimmerman wasn’t in the city on Jan. 6 because he was recovering from the coronavirus and he said that after the Nov. 14 event, the North Carolina Oath Keepers split from Rhodes. Zimmerman said the split came over Rhodes’ suggestion that the Oath Keepers wear disguises to entice antifa activists to attack them so the Oath Keepers could give them a “beat down.”

Zimmerman said Rhodes suggested dressing up as older people or mothers pushing strollers and putting weapons in the stroller.

“I told him ‘No, that’s not what we do,”’ Zimmerman said. “That’s entrapment. That’s illegal.”

In a separate case on Thursday, Jeremy Joseph Bertino of North Carolina became the first member of the Proud Boys extremist group to plead guilty to seditious conspiracy in the Jan. 6 attack. Three Oath Keeper members have also pleaded guilty to the charge.