The Great Days > News > Obama rallies PA voters for John Fetterman, and pushes them to consider: ‘Who will fight for you?’
News

Obama rallies PA voters for John Fetterman, and pushes them to consider: ‘Who will fight for you?’ 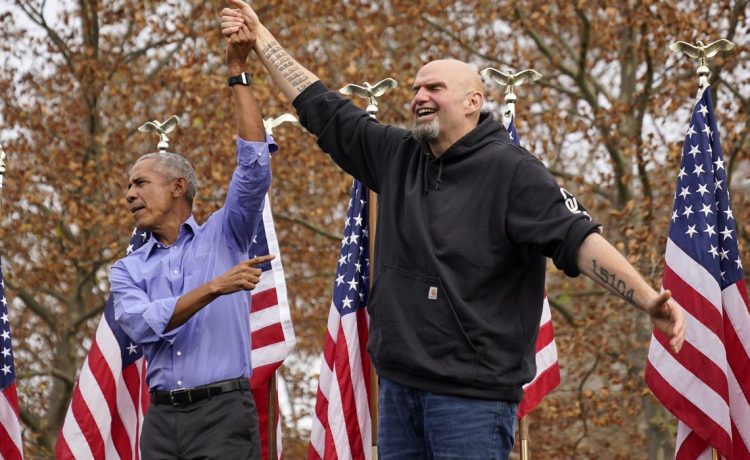 Former President Barack Obama lent his star power Saturday to Democrat John Fetterman’s campaign for the U.S. Senate against Republican Mehmet Oz, saying the stakes of the midterm elections are too high for Pennsylvanians to sit out, and saying the contrast between the candidates is clear.

Speaking at a rally at the University of Pittsburgh, Mr. Obama called on voters to consider a simple question: “Who will fight for you?”

“That is the choice in this election,” he said. “Who will fight for working people who are struggling to pay their bills?”

Mr. Obama said it is not Republicans, making the case their top goals are “owning the libs!” and winning the approval of former President Donald Trump, who is slated to headline an Oz rally Saturday night.

“That is their agenda,” Mr. Obama said. “They are not actually interested in solving problems.”

“What they want to do is make you angry and then find somebody to blame because that way you may not notice they have no answers of their own,” he said.

“It is easy to joke about Dr. OZ and all these quack remedies he pushed on TV, but it matters,” Mr. Obama said. “It says something about his character. If someone is willing to peddle snake oil to make a buck then he is probably willing to sell snake oil to get elected.”

Mr. Fetterman, the state’s lieutenant governor, and Mr. Oz, a celebrity physician, are running in a neck-and-neck in the race, according to polls that show the Republican has seized the momentum in the race over the closing weeks of the campaign.

Mr. Trump, who endorsed Mr. Oz in the primary, is planning to headline a rally on Saturday night in Latrobe, Pa.

The dueling visits from the former presidents come four days out from Election Day and after a record-breaking number of early votes have been cast in states across the nation.

Mr. Obama is scheduled to headline a rally Saturday night in Philadelphia with President Biden.

The Senate is currently split 50-50 with Vice President Kamala Harris providing the tie-breaking vote that gives Democrats control of the chamber.

Mr. Fetterman held a consistent lead in the polls for months, but the momentum started to shift over the summer after the Senate Leadership Fund, the super PAC aligned with Senate Minority Leader Mitch McConnell, Kentucky Republican, started airing ads attacking the Democrat as soft on crime.

Mr. Fetterman also has faced nonstop questions about his health after he suffered a stroke days before the primary race.

“Pro-tip: Please if you are going to give a speech after you have been recovering from a stroke, you really don’t want to have to come before Barack Obama,” Mr. Fetterman said Saturday. “Today Dr. Oz is going to be standing with Donald Trump on the stage and I am going to be proud to be standing with the president that is 100% sedition free.”

Mr. Obama said a vote for Mr. Fetterman is a vote for passing “commonsense” gun safety laws, protecting Social Security and Medicare, and standing up for women “having the right to make their own health care decisions.”

“We can go backward,” he said. “If Republicans take back the House and Senate we could be one presidential election away from a nationwide ban on abortion and that might just be the beginning.”

Mr. Obama also drove home the idea a vote for Mr. Fettrman and Democrats up and down the ticket is a vote to defend Democratic norms that Mr. Trump and Republicans have tossed aside.

Mr. Obama said the GOP’s answer to every situation is always the same.

“If there was an asteroid headed toward Earth they would all get into a room and say, ‘You know what we need? Tax cuts for the rich.’”

He urged voters not to get disillusioned with the system.