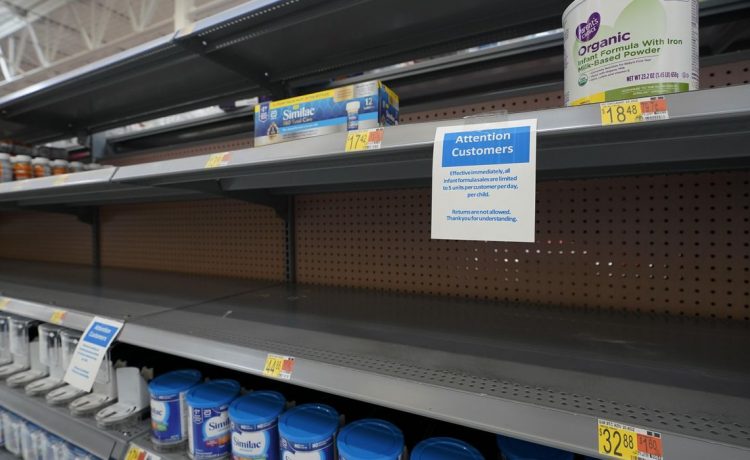 A month after President Biden invoked the Defense Production Act to import emergency supplies of infant formula, store shelves are still half empty and brands shipped here on U.S. military planes from other countries are not yet helping many families struggling to find critical specialty brands.

The U.S. government began importing infant formula from Switzerland, the U.K. and countries one month ago, launching Operation Fly Formula to address a significant shortage that was triggered by the pandemic, a major formula recall and a decision by the FDA to shutter one of the nation’s top formula-producing plants for several months citing health violations.

Despite government intervention, many families with infants are still desperately searching for their next can of formula, and have come to rely on social media groups to learn when store shelves are restocked or to buy from people who are selling or trading a can or two from their homes.

Madisyn Pappion, who lives in Tampa, drove more than 80 miles on Sunday to secure two, 12-ounce cans of powdered Nutramigen, an infant formula designed for babies with milk allergies that has been difficult to find on store shelves for months.

Ms. Pappion has little choice but to embark on a near-daily hunt for formula.

Her six-month-old daughter reacts with skin rashes and other serious allergy symptoms from milk-based formula and her pediatrician advised against trying to substitute another non-milk brand for Nutramigen because the formulation is not the same.

The two cans Ms. Pappion secured on Sunday will last about six days, so she’s constantly searching for more.

“It’s scary, because what else can I feed her,” Ms. Pappion said.

Ms. Pappion belongs to about ten different “formula finder” pages on Facebook, where parents alert each other to newly stocked store shelves, or offer to sell, trade or give away hard-to-find formulas.

For a while, her baby was surviving on sample cans.

“I haven’t been able to actually purchase it from a store,” Ms. Pappion said.

Officials from the Food and Drug Administration said it could take months more before the shortage is eased significantly. To help fill the void, President Biden in May invoked the Defense Production Act to help U.S. factories ramp up production. Mr. Biden launched the plan to deliver formula from abroad on May 20.

On Monday, a shipment of Kendamil formula arrived in Boston on a flight out of the U.K., where it is produced. Kendamil is now available online and on shelves at Target and other retailers. The U.S. is also allowing imports of Australia’s Bubs Infant Formula, which can now be purchased online at Walmart and Kroger.

Much of the emergency supply of specialty formulas imported by the U.S. in recent weeks, however, has not been stocked on store shelves, and popular milk-free formulas remain hard to find or in very short supply.

The administration said most of the supply, meant for infants with difficulty digesting or absorbing nutrition, will only be available  “through a distribution pipeline,” that serves hospitals, home health companies and the Women, Infant and Children or WIC programs that serve low-income families.

A spokesperson for the Health and Human Services Department did not respond to a request for more details about the distribution of specialty formulas.

Officials with the Florida health department said the state’s WIC programs have not received any baby formula.

“The federal government has not informed Florida on anything related to Operation Fly Formula, nor have they provided any updates as to where those shipments are going,” said Jeremy Redfern, a spokesman for the Florida Department of Health.

Store shelves throughout the U.S. remain half-empty, with supplies of popular specialty formulas including Nutramigen, Gerber Extensive HA, and Enfamil products such as Neuropro, either out of stock or in limited quantities, particularly in powdered form.

Shoppers at a Target store in Union Township, New Jersey, were greeted with a sign informing them of a four-containers limit on baby formula purchases “due to high demand and limited inventory.”

The store, about 20 miles west of New York City, had plenty of Similac 360 Total Care, a liquid form sold in six packs.

The bottom shelf, designated for powder containers of Similac and other brands, sat empty Monday morning except for three cans of a Target-brand powder formula for toddlers.

The store had in stock Similac NeoSure for babies born prematurely.

A few miles up the road, a CVS store in Maplewood, New Jersey, directed customers to “ASK A STAFF MEMBER FOR BABY FOOD.”

Some of the supply is kept behind the counter due to the shortage crisis. Trucks have brought in a trickle of Similac and Enfagrow, a formula for toddlers, in recent days.

The FDA-closed plant, in Sturgis, Michigan, is operated by Abbott Nutrition, which produces much of the nation’s supply of Similac, the most popular U.S. formula brand. The plant also produced many specialty formulas for infants with metabolic problems and other critical feeding needs.

The FDA closed the plant in February, citing health violations, and after more than three months and a worsening formula shortage, the Justice Department entered a legal agreement with Abbott to reopen the plant in June.

But significant flooding last week closed the plant again, which will delay the production of specialty formulas for several weeks, Abbott officials said, and will further postpone production of other popular products such as Similac Alimentum, a formula for babies like Ms. Pappion’s daughter, who have an intolerance to cow’s milk protein.

Sofia Silva, the mother of 10-month-old Oliver, said she was hopeful the formula supply would improve in Tampa after seeing images on television of formula arriving at U.S. airports from overseas.

But Operation Fly Formula has not made it easier to find her son’s formula, Enfamil NeuroPro.

“Overall, the shelves are still empty,” Ms. Silva told The Washington Times. “We saw the first shipments of formula being flown in from overseas, but I haven’t seen anything here in the last few weeks.”