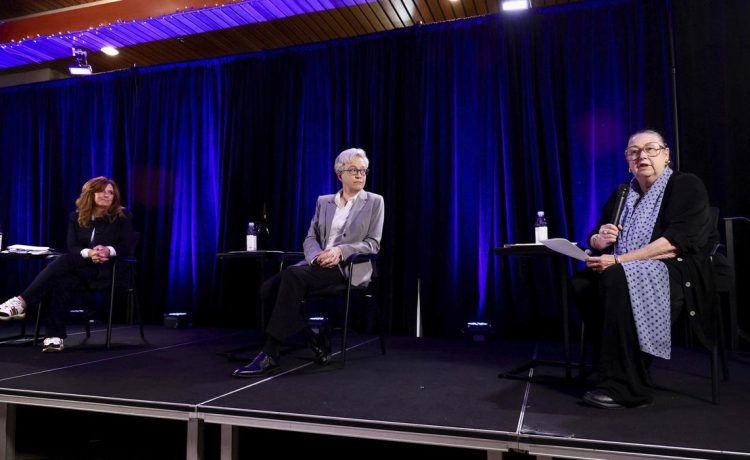 The GOP sees an opportunity to flip the governorship in deep-blue Oregon, as its nominee runs on a law-and-order platform aiming to become the first Republican to head the state since the 1980s.

Republican Christine Drazan has been narrowly leading Democrat Tina Kotek in recent polls, thanks partly to third-party candidate Betsy Johnson, who left the Democratic Party, and partly to the unpopularity of outgoing Democratic Gov. Kate Brown.

Ms. Drazan’s campaign has attacked Ms. Kotek over her positions on law enforcement and for being too “woke.”

In July 2020, during riots in Portland, Ms. Kotek criticized Mayor Ted Wheeler and the city’s commissioner of police for officers’ use of tear gas against protesters.

Ms. Kotek has focused her campaign, instead, on support for a gun control ballot measure, the only one of its kind this election cycle.

The measure would require a permit to purchase any gun and also ban magazines over 10 rounds, with exemptions only granted to current owners and members of law enforcement and the military.

Her position distinguishes her sharply from both Ms. Johnson and Ms. Drazan, who each have an “A” rating from the National Rifle Association and oppose the ballot measure.

Ms. Kotek’s camp also responded by hammering Ms. Drazan over her pro-life position and warns that Oregonians will lose access to abortion if Ms. Drazan is elected.

Ms. Drazan, however, has insisted throughout the campaign that since abortion is legal in Oregon, she would follow the law if elected.

The Washington Times reached out to both the Drazan and Kotek camps but did not immediately hear back.

Oregon voters rate violent crime and homelessness as the state’s most pressing issues according to a poll released Monday by The Oregonian Monday.

When asked how important crime is to their decision in the governor’s race, 93% said it is important, including 70% who called it “very important.”

Four recent polls by the Oregonian/DHM Research, Clout Research, Nelson Research and Emerson all show Ms. Drazan ahead with just over five weeks until Election Day.

Though all four polls show Ms. Drazan in the lead, none do so by a statistically significant amount and they also show the impact of Ms. Johnson’s third-party candidacy.

Political handicappers at the Cook Political Report and the University of Virginia’s Center for Politics rated the race as a “tossup” since August.

Should Ms. Drazan win, she would be the first GOP governor elected since Republican incumbent Victor Atiyeh won reelection in 1982.

All three women vying for the governor’s office have served in the state legislature.

Most recently, Ms. Kotek led the Democratic majority in the state house as its speaker, while Ms. Drazan led its GOP minority. Ms. Johnson served terms as a Democrat in both chambers of the legislature during the 00s but hasn’t held office recently.

Each campaign managed to stay competitive against the other by racking up millions in donations from their respective party apparatuses and corporate donors.

Despite her lesser standing in the polls and absence of major-party support, Ms. Johnson has outspent both women by $4.3 million, with help from donors like Nike’s co-founder Phil Knight and Timber company heirs Kathleen Jones-McCann.