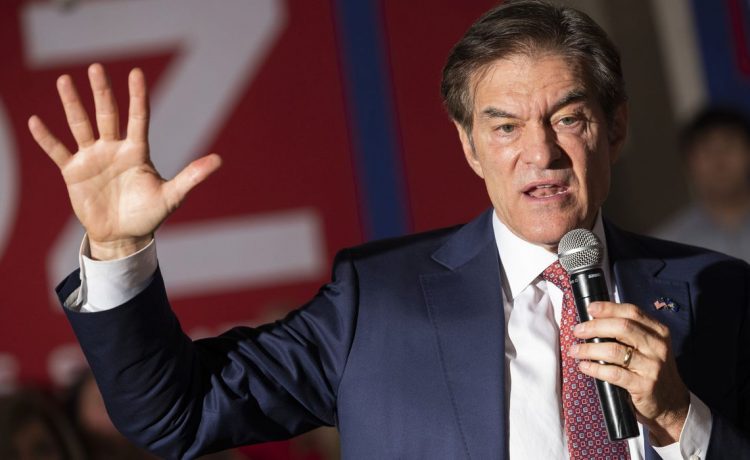 Republican Mehmet Oz for the first time has taken the lead in polls in Pennsylvania’s U.S. Senate race after Democrat John Fetterman’s impairment from a recent stroke came into full view on the debate stage last week.

Mr. Oz has slowly closed the gap in recent days and overtook Mr. Fetterman 47.5% to 44.8% in an Insider Advantage survey conducted after the Democrat’s rocky debate performance that left the party panicking over a potential loss of both the seat and control of the Senate.

The neck-and-neck race, which Mr. Fetterman leads by an overall average of just 0.3% in recent polls, has been difficult for Republicans to navigate, Sen. Rick Scott said Sunday.

“I think the hardest has been Pennsylvania, but Dr. Oz will win against Fetterman. But we’re going to pick up Georgia, we’ll pick up Nevada. I think we have every reason to believe we’re going to pick up Arizona and probably New Hampshire,” the Florida Republican, who chairs Senate Republicans’ campaign arm, said on ABC’s “This Week.” “The Democrat agenda is very unpopular … So I’m very optimistic that we’re going to win. We have great candidates.”

Mr. Oz has ran on a platform of law and order that’s reminiscent of other Republicans across the country, vowing to crack down on crime, inflation, illegal immigration and anti-fossil fuel energy policies.

The 50-50 split Senate means that a net gain of only one seat will give Republicans the majority.

Mr. Fetterman has since told supporters he knew the debate, which he participated in with the help of closed captioning because of ongoing auditory processing issues, “wasn’t going to be easy after having a stroke five months ago.”

“I don’t think that’s ever been done before in American political history,” he said last week. “I got knocked down, but I got back up. I’m going to fight for everyone in PA who ever got knocked down and had to get back up.”

Over in the House, headwinds against Democrats are far stronger. The party is expected to lose control, and it’s become a question of just how many seats Republicans will pick up.

“Don’t punish the people who are fixing your problems, and don’t reward the people who are trying to exploit the problems for their own political power,” the New York Democrat said on CBS’s “Face the Nation.” “That’s really the difference right now. We’re engaged in the hard work of bringing our country forward. The other side’s working on their own power.”