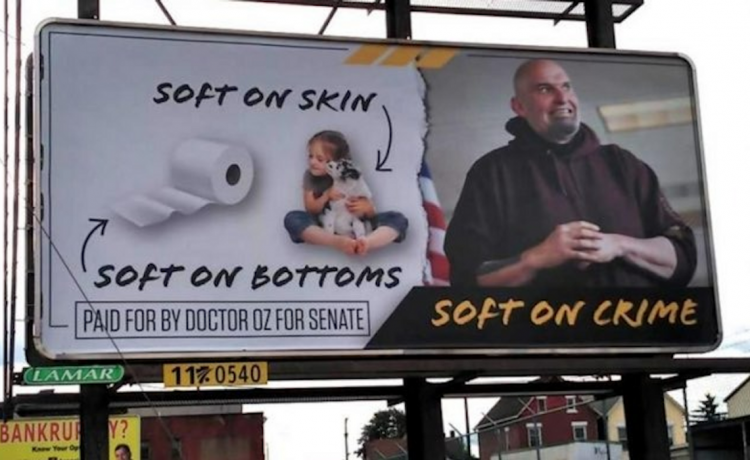 Republican Mehmet Oz’s campaign has posted a billboard in Pennsylvania Lt. Gov. John Fetterman’s backyard attacking the Democrat as being soft on crime in their race for the U.S. Senate.

Mr. Oz has been pounding home the message in recent weeks as he looks to make up ground on Mr. Fetterman and woo voters concerned about quality of life issues.

The Oz campaign billboard in Braddock, a borough in the eastern suburbs of Pittsburgh where Mr. Fetterman served as mayor from 2006 to 2019, features images of toilet paper and a toddler with a cat with arrows pointing to them saying “soft on bottoms” and “soft on skin.”

Alongside them is a photograph of Mr. Fetterman wearing his standard black hoodie and flashing a deranged smile with the caption “SOFT ON CRIME.”

“Let’s be clear — some things should be soft, but Pennsylvania’s next Senator should NOT be soft on crime,” said Brittany Yanick, communications director for Mr. Oz’s campaign.

The Oz campaign and its allies have intensified attacks on Mr. Fetterman’s record on public safety in recent weeks, warning that he wants to decriminalize all drugs and highlighting how he advocated for criminals, including those convicted of second-degree murder, on the Pennsylvania Board of Pardons, which he leads.

Mr. Fetterman has dismissed the attacks, saying the GOP is fear-mongering for votes.

But the criticism has put him on the defensive. Mr. Fetterman says he supports giving rehabilitated prisoners a second chance and has touted the role he played fighting crime as mayor of Braddock.

Mr. Fetterman, meanwhile, has been unrelenting in casting Mr. Oz as a carpetbagger who is too rich to understand the challenges facing working-class people.

And he has warned voters that Mr. Oz is a “radical anti-abortion” candidate in the wake of the Supreme Court overturning Roe v Wade, the landmark 1973 ruling that provided a constitutional right to the procedure.

Mr. Fetterman has held a steady lead in the polls despite facing nonstop questions about his health after suffering a stroke days before the May Democratic primary and in the face of President Biden’s lagging approval rating, which is an indicator of how people will vote in midterm elections.

Mr. Fetterman has a favorable impression among 48% of those voters versus 43% who see him in an unfavorable light.

A recent Marist Poll showed among voters who “definitely plan to vote” in the midterms, 46% approve of the job Mr. Biden is doing, compared to 53% who disapprove.