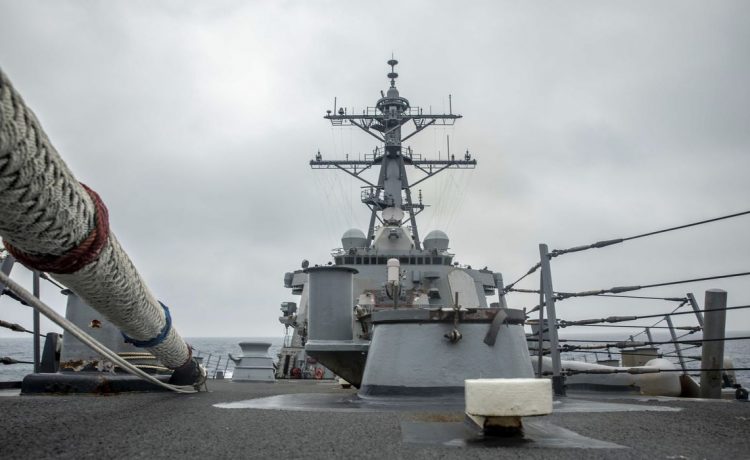 The commander of the world’s largest naval force component says there should be no ambiguity about the operational capabilities of the U.S. Navy’s warships and other naval forces to defend Taiwan from a Chinese attack.

Adm. Sam “Papy” Paparo, U.S. Pacific Fleet commander, said in an interview with The Washington Times that his forces are ready to defend Taiwan from a Chinese military move, a prospect that is seen as increasingly likely under aggressive policies of Chinese President Xi Jinping.

Asked about comments from Secretary of State Antony Blinken on Monday that China appears to be speeding up its timetable for taking action against Taiwan, which Beijing claims as part of its sovereign territory, Adm. Paparo said: “This is a decade of concern, so I absolutely see the logic of in the secretary’s discussion.”

Recent Chinese military efforts and drills in preparation for a Taiwan invasion or other military action can be seen as “rehearsals” by the People’s Liberation Army, he said.

On the potential for a conflict with China in the Taiwan Strait, Adm. Paparo said: “The first thing I will say is, we’re ready today. We’ll be ready tomorrow. We’ll be ready next week and next year. There’s not a single day that we’re not going to be working to get readier.”

U.S. policy since the 1970s recognizes there is a single China but that differences over Taiwan’s sovereignty and its relationship to the mainland must not be resolved by force, he said.

The four-star admiral said he could offer “no opinion on the policy of ‘strategic ambiguity’” regarding how the U.S. military would respond to a Chinese move against Taiwan.

“But,” he added, “what I can offer you is operational clarity.”

Under the Taiwan Relations Act of 1979, he noted, “I’m required to have the capability to thwart any invasion of Taiwan. Any effort to resolve the matter by force and on that there is no ambiguity. There is just perfect clarity that I’m confident in our ability to do that with our joint capabilities that are capable of deploying quickly to the point where they are operating dynamically in the battlespace and imposing intolerable costs to an adversary.”

The 1979 law to support Taiwan came after the Carter administration switched formal diplomatic recognition from Taipei to Beijing. It states that U.S. recognition of the People’s Republic of China was pre-conditioned on the future of Taiwan, now a thriving island democracy of nearly 24 million people, being settled by “peaceful means.” The law also states that it is U.S. policy “to maintain the capacity of the United States to resist any resort to force or other forms of coercion” that endangers the security, social and economic system of the people of Taiwan.

“Strategic ambiguity” is not a formal U.S. policy. It was first discussed in congressional testimony by a Pentagon official in 1995.

The policy has been called into question by President Biden who said most recently in September that the United States would send military forces to defend Taiwan if there were an “unprecedented attack” by China.

It was the fourth time the president made the statement and after each mention, the White House insisted the comments did not represent a change in long-standing U.S. policy. Still, the repeated statements by the president have led to official protests from Beijing and widespread perceptions that the strategic ambiguity approach is a thing of the past.

China’s leaders accuse the Biden administration of trying to change the status quo regarding Taiwan and have repeatedly stated the use of force against Taiwan remains an option.

On Sunday, Chin’s Mr. Xi said efforts to take control of Taiwan, which split from the mainland during a civil war in 1949, remained one of the Chinese Communist Party’s highest priorities.

While China has built up its navy and strategic forces under Mr. Xi, Adm. Paparo, said in the interview the People’s Liberation Army has several major weaknesses and vulnerabilities as well.

“One, they have no friends. No allies and partners,” he said.

Beijing has a “passing friendship” with Russia that is limited in scope, and also ties to North Korea that also are not strong.

“Their second weakness is a lack of experience in the combat areas that would be required for them to gain the advantages,” Adm. Paparo said.

“But on that front, they are working their way through that,” he acknowledged. “And they’re attempting to learn and grow in those capabilities.”

And, finally, he said, China has another, more profound weakness: “the utter absurdity and weakness of their cause in their malign intentions.”

The commander leads the world’s largest fleet command, covering 100 million square miles of territory of the Earth’s surface from the West Coast of the United States to the Indian Ocean.

His command includes around 200 ships and submarines, nearly 1,2000 aircraft and more than 130,000 sailors and civilians. The fleet is under administrative control of the Navy’s chief of naval operations and operationally is under the Hawaii-based Indo-Pacific Command.

It’s a command that has been led over time by such legendary commanders as Adm. Chester Nimitz and Adm. Raymond Spruance.

The Pacific Fleet recently augmented its two numbered fleets, the Seventh Fleet and Third Fleet, with a new “Fleet Information Warfare Command-Pacific,” a unit designed to oversee information warfare, from cyberattacks and defense to strategic messaging. The new command coordinates communications and messaging with Indo-Pacific Command and the office of Defense Secretary Lloyd Austin.

Once again, a main target of the initiative is China.

The information warfare center is “always working toward characterizing [China’s] ability to see understand, decide and act in the battlespace and we’re ready to frustrate their ability to do those things,” Adm. Paparo said, adding he sees the new information battlefield and the struggle between competing value systems as increasingly important.

“I have faith in the principles of a free and open Indo-Pacific; in the principles of sovereignty, of human dignity, human rights, self-determination, freedom of the seas, freedom of the skies, freedom in space,” he said. “I have absolute belief in that. I have absolute belief in the values of the allies and partners, and those values in and of themselves are an info op.”

“In our adversaries,” he said, “it’s usually the converse.”

The commitment to democratic openness and a free, sometimes critical press may have short-term disadvantages in the information wars, the admiral said, but in the long term, “our principles of being truthful and authentic, and our long-term principles of freedom of the press will prevail because people are smart.”

Within the U.S. military, the Pacific Fleet is known as a ready joint task force that must be ready to conduct operations in both the kinetic and non-kinetic combat scenarios. As part of a broader Pentagon strategy, the Pacific Fleet, like other military components, plans to leverage high-technology advances in weapons and other capabilities, the commander said.

Another key area will be improvements in the ability of the fleet to execute precise and timely logistics in a fight, he said.

Earlier, during a speech to a conference on information operations, Adm. Paparo said the use of information tools is “first, middle and last” in the effort to prevent war and deter adversaries. The military, in combination with allies and partners, aims to respect for rule of law and international norms while championing freedom, rights and liberties.

Deterring China, as well as hostile powers such as Russia and North Korea, means opposing “expansionism and seizure of land, seas, nutrients and mineral resources by coercion and/or military actions,” Adm. Paparo said.

The People’s Republic of China, he argued, is seeking to gain global hegemony through the use of innocuous-sounding phrases like promotion of “common prosperity.”

“This is the system where the PRC is the center and ‘all affairs under heaven’ are determined through their autocracy,” Adm. Paparo said. “Not the rule of law is what we see in the PRC, but it is the ‘rule by law.’”

The U.S. and its allies are seeking to block Chinese ambitions on a series of fronts: military expansion in the South China Sea; coercion and pressuring against Taiwan and Japan’s Senkaku Islands; pressure on India’s border region; and repression of freedoms and liberties in Hong Kong, he said.

“This is not about containing PRC economic and military growth,” he said. “It’s about ensuring that we as a free and sovereign nation ensure their actions, behaviors do not disrupt the peace and stability of the region, or the international rules-based order which … has lifted 60% of the world out of poverty and lifts 160,000 human beings out of poverty each and every single day.”

Adm. Paparo is the second senior Pacific Fleet officer to warn of the growing danger of a military conflict over Taiwan.

Adm. Thomas said he does not know if China will use its military against Taiwan, but said American forces must be ready and urged that differences be settled peacefully.

“Clearly if they do something that’s non-kinetic, which, you know, a blockade is less kinetic, then that allows the international community to weigh in and to work together on how we’re going to solve that challenge,” Adm. Thomas told The Wall Street Journal in September.