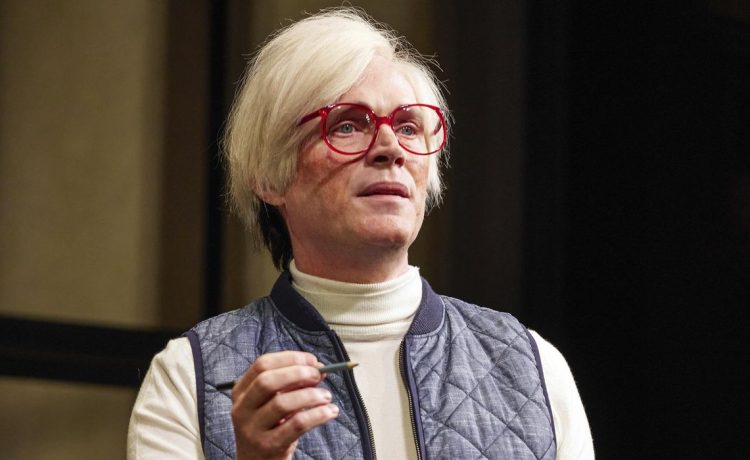 NEW YORK — Paul Bettany has long been an admirer of art superstar Andy Warhol, from a distance, like an art lover wandering a favorite gallery. But when he was initially offered a chance to get much closer and play his hero on stage, he declined.

“I don’t know how you get underneath the wig and the glasses and the carefully curated public persona. I don’t know how to do it,” Bettany recalled thinking. “I think there might be a reason that Andy is always a cameo in films.”

Persistence on the part of a producer and reading Warhol’s diaries convinced Bettany that he might at least try. Now he finds himself on Broadway eight times a week underneath a wig, wearing glasses and making the very art onstage that he long admired.

Bettany stars in “The Collaboration,” Anthony McCarten’s fictional account about the real period in the mid-1980s when Warhol was compelled to work with new sensation and potential rival of the New York art world, Jean-Michel Basquiat, played by Jeremy Pope.

They were different men – one white, one Black; one older, the other younger. Warhol, 58, was a conceptional artist whose Pop Art explored household brand objects like Campbell’s soup cans and celebrities like Marylyn Monroe, while Basquiat, in his late 20s, was a neo-Expressionist, concerned with colonialism and racism. “We speak different languages,” Basquiat says in the play.

The work explores what may have been their dynamic as both men try to figure the other out and visit each others’ studios, and deals with race, commercialism, police brutality, addiction and the artist’s soul. The audience watches them paint together, too.

Long before the role came along, Bettany had been a fan of both artists and visited a remounting of their collaboration at the Whitney in 2019. He hopes audiences go home after seeing the play and think about each man in a different way.

His Warhol is droll yet vulnerable, needy and yet sometimes haughty, curious and also competitive. He is threatened by the younger artist and feels old. “I am afraid. Not of death, of life,” he says in the play.

The way Bettany shades his performance is clever, giving the audience at the beginning a glimpse of what they came IN expecting – a clipped, chilly Warhol in a turtleneck who then gradually unwinds as the play progresses into a fluid, fully fleshed-out person.

While no one knows what was the exact dynamic of the two men – Warhol died in 1987 and Basquiat a year later – the play tries to stay as true to what we know of the art superstars.

“This is our version. Nobody really knows. But I do think that’s the wonderful thing about drama,” says Bettany, quoting McCarten as saying that “documentary can get you so far. It can get you to the front door, but it’s never going to invite you in for a cup of tea. Drama and imagination can get you there.”

Critics have had mixed reactions in New York, but Bettany’s performance has been praised, with the Daily News saying he “treads lightly and wisely through a tough assignment given all of the pre-existing Warholian preconceptions.”

The play, which crossed the Atlantic after having played London’s Young Vic Theatre this spring, was made into a film before it landed on Broadway, mostly shot in Boston. It opens the play up – adding more scenes, introducing audiences to Warhol’s mother and showing Warhol and Basquiat on the streets making graffiti art. Filming it added even more depth to the Broadway production.

One thing Bettany shared with Warhol was that the play shows the artist gingerly returning to painting after 25 years of making reproductions – roughly the same time Bettany has been away from stage work.

In the meantime, he’s been noticed for playing android superhero Vision in the Marvel Cinematic Universe. Bettany, 50, earned an Emmy Award nomination last year for his role in “WandaVision.”

Doing theater at 50 is very different from doing it at 25, he says. When he was younger, he’d finish a play and be so buzzed he’d be unable to sleep, winding down in a club or a pub until the wee hours.

“Now I’ve got kids. Six o’clock in the morning, I’m up,” he says laughing. “By the time I’ve left the theater tonight, I’ll get home at 11, and I will have electricity running through my body. All I want to do is be with people and get it out of me. So I’m not sure it’s the healthiest thing in the world for me, frankly, but I love the doing of it.”