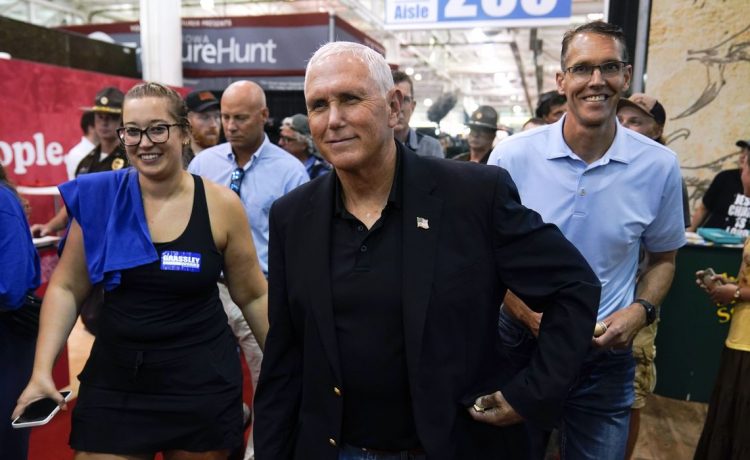 DES MOINES — Former Vice President Mike Pence is tapping the brakes on his willingness to testify before the House Jan. 6 committee, saying he has to ponder “profound constitutional issues” and the partisan nature of the probe before agreeing to any request.

Mr. Pence recently surprised political analysts when he said he would consider testifying to the Democratic-led committee investigating the Jan. 6, 2021, chaos at the Capitol. But in an exclusive interview with The Washington Times, Mr. Pence took a more cautious line, saying there is a myriad of issues he must sort out before he agrees to talk to the panel.

“If the committee wanted to extend a formal invitation I would consider it, but we would reflect very carefully on my obligations to preserve the separation of powers and the constitutional framework that I served in,” he said.

He also challenged the panel’s credibility.

“I have real concerns about the partisan nature of the Jan. 6 committee,” he said. “By essentially rendering this as a partisan committee that’s operating on a very partisan basis — and at times leaking information and leaking testimony — I think in many respects it has squandered an opportunity to really thoughtfully examine what took place that day and where the failings were.”

Mr. Pence had to be rushed out of the House chamber as enraged supporters of then-President Trump broke into the Capitol. The House select committee investigating the riot has argued he was in peril as he was shepherded through the corridors, just barely avoiding some of the mob.

The committee has been making the case that it is Mr. Trump who put Mr. Pence’s life in danger through words and actions that the crowd interpreted as marching orders to invade the Capitol and stop Mr. Pence, who as vice president was overseeing Congress’ certification of President Biden’s election victory.

Pressed by The Times, the former vice president wouldn’t say whether he agreed with the theory that Mr. Trump endangered him. He also didn’t reject the notion.

“I was at the Capitol that day. I don’t know what was happening at the White House,” Mr. Pence said.

He added: “I’d leave that judgment to others. I think every American has their own perception about that day. For my part, I’ll always be convinced that we did our duty.”

At the same time, however, Mr. Pence labored to put distance between himself and the former president he served under.

Mr. Pence called Mr. Trump a “larger than life personality” but said the conservative movement has had plenty of those. He said it’s the slate of issues he and Mr. Trump developed that matter more to the GOP’s success in coming elections.

“When I would speak at a Trump rally with tens of thousands of people before the president came out, it was reciting to people how we rebuilt the military, launched the space force, taken down ISIS and how we’d brought [Iranian general Qassem] Soleimani to justice, how we’d cut taxes, rolled back regulations and unleashed energy, how we’d appointed conservatives to the courts, that’s what blew the roof off,” he said.

Mr. Pence has joined other Republicans in expressing concerns over the FBI’s raid on Mr. Trump’s residence and office at his private Mar-a-Lago club in Palm Beach, Florida. He called it unprecedented and said it “demands unprecedented transparency” from the Justice Department to explain why it did what it did.

But he has also denounced calls from the far-right to “defund the FBI,” saying that’s a betrayal of conservative principles.

“The GOP supports the men and women who serve on the thin blue line at the local, state and federal level, and I thought it was important this week to remind my fellow Republicans of that fact and to say we can hold the attorney general and senior leadership accountable without demeaning or attacking rank-and-file members of the FBI, who are dedicated law enforcement personnel,” he said.

Calls to defund and dismantle the FBI, Mr. Pence said, were as wrong as calls from far-left lawmakers to defund the police.

On immigration, Mr. Pence said he believes a future president has the power to build the border wall “by executive action.”

Mr. Pence said a future president also has the power to reinstate the Trump-era “Remain in Mexico” policy that pushed some migrants back into Mexico to wait for their immigration court hearings after they were caught jumping the southern border and then requested asylum.

“The cartels have operational control of our southern border, which is to say it’s not just the illegal immigration, but they — the cartels — have the ability to be moving drugs across our border that are ransacking our communities,” he said. “I think there’s probably no more urgent issue in the country today.”

Mr. Pence’s visit to Iowa after an earlier stop in New Hampshire — traditionally home to the two opening contests on the presidential nomination calendar — is adding to speculation over his presidential aspirations, which he plans to decide early next year.

“Elections are about the future,” Mr. Pence said. “The American people are hurting today. Inflation is at a 40-year-high, gasoline prices are through the roof, [and there is] a crisis on the southern border of which we have never seen in our lifetime.”

At the state fair, Mr. Pence’s campaign visit on behalf of Mr.Grassley coincided with a deluge of rain that sent fairgoers scurrying for cover. Mr. Pence, water dripping from his suit coat and ears, at one point jogged down the grand concourse past vendors selling everything from funnel cakes to deep-fried mac & cheese, and corn dogs.

He ended up roaming an exhibit hall filled with vendors selling, among other things, windows, treadmills and mattresses.

He visited the Iowa GOP booth and along the way ran into Janet Reiser.

The 63-year-old substitute teacher had traveled over two hours with her friend to catch a glimpse of the former vice prescient. She grabbed his hand and begged him to “run for president please!”