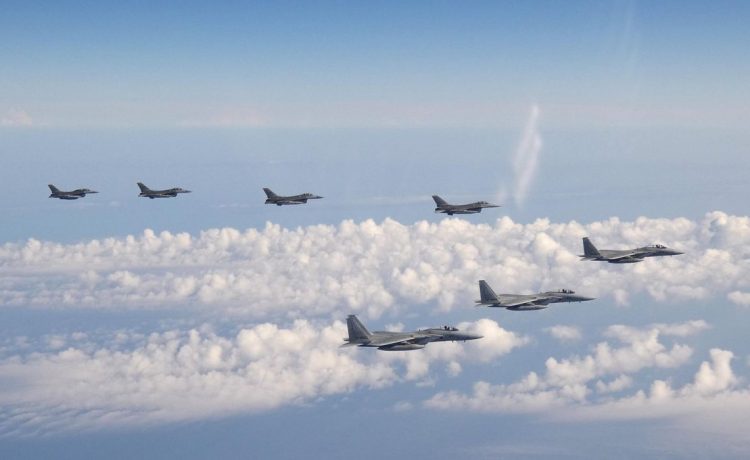 Republican lawmakers are sounding the alarm over the Pentagon’s plan to pull dozens of U.S. F-15 Eagle jet fighters out of Japan at a moment when rising North Korean provocations and China’s growing regional assertiveness have Tokyo looking to beef up its forces and expand coordination with the U.S.

While Pentagon officials say a “steady presence” of U.S. fighter jets will be maintained at Kadena Air Base in Okinawa through rotational deployments of other aircraft, including F-22s currently positioned in Europe, the plan has drawn increasing scrutiny on Capitol Hill.

Florida Sen. Marco Rubio and several other GOP lawmakers have questioned the Pentagon’s decision to retire its entire F-15 fleet at Kadena without finding a permanent replacement for the jets. The decision would involve half of the roughly 100 Air Force fighters in Japan.

“While we agree with the need to modernize the Air Force’s fleet in order to counter the rising threat of [China’s] People’s Liberation Army, we are concerned with reporting that indicates there will be no permanent presence to replace the Okinawa F-15s,” the Republicans lawmakers wrote in a Nov. 1 letter to Defense Secretary Lloyd Austin.

The letter, signed by Mr. Rubio, Sen. Bill Haggerty of Tennessee, Rep. Michael T. McCaul of Texas and Rep. Mike Gallagher of Wisconsin, homed in on recent bellicose statements from Chinese President Xi Jinping, claiming Mr. Xi has made it “abundantly clear” that Beijing intends to take over Taiwan and establish itself as the primary power in the Indo-Pacific.

Mr. McCaul and Mr. Gallgaher are in line for top jobs in the House Foreign Affairs and Home Armed Services Committee if Republicans reclaim control of the House in Tuesday’s midterm elections.

Reducing the U.S. fighter jet presence would have “catastrophic strategic, geopolitical, military and economic consequences for U.S. interests,” the lawmakers wrote. “We believe that [the Department of Defense’s] plans to replace permanently-based fighters with rotational forces will lead to a tangible reduction in American forward combat power in the Indo-Pacific.”

The Pentagon for now appears to be moving ahead despite the concerns. F-22A Raptors that had been based in Alaska arrived at the Okinawa air base late last week for a temporary rotation, Pacific Air Forces officials confirmed in a statement. Two squadrons of the aging F-15s are being readied to return to the United States, and a final decision on permanent basing remains under study.

The U.S. F-15 pullout comes as Japan is scrambling to beef up its military capabilities, accelerating a long gradual evolution of Tokyo’s security profile away from the strictly pacifist constitution adopted after World War II.

Japan’s Prime Minister Fumio Kishida, in a major defense initiative announced Nov. 6, vowed to strengthen his country’s military in light of North Korea’s continuing nuclear brinkmanship and missile launches and increasingly aggressive moves by China to assert its influence in the region and exacerbate territorial disputes with Tokyo.

Critics have warned Tokyo’s military moves could violate Japan’s constitution and draw the country into the increasingly hostile rivalry between Washington and Beijing — at a time when China has emerged as Japan’s single largest trading partner.

Mr. Kishida insisted Sunday that Japan would stick to its post-World War II pledge as a “pacifist nation” and be transparent about its security policy.

The Japanese prime minister hosted the Western Pacific Naval Symposium over the weekend, where he said Japan will formulate a new national security strategy by the end of the year. The move will “fundamentally reinforce” Japan’s military posture within the next five years, he said.

“No time can be lost for the enhancement of our defense capabilities, including the buildup of vessels [and] reinforcement of capabilities to respond to missile attacks,” Mr. Kishida said.

“This year, North Korea has launched ballistic missiles with unprecedented frequency, including that of a new type of [Intercontinental Ballistic Missile],” he said. “They even launched a missile that flew over Japan. We absolutely cannot allow nuclear and missile development by North Korea.”

Mr. Kishida also denounced Russia’s ongoing war against Ukraine, warning it could undermine the very foundations of the international order. “Russia’s aggression has continued for more than half a year,” he said. “This is a serious situation not only for Europe but also for the entire international community, including Asia.”

The Pentagon, meanwhile, has sought to downplay its redeployment plans, which center around the withdrawal of F-15 fighters from Kadena Air Base in Okinawa after more than 30 years on duty there.

Officials say the Air Force is retiring its F-15 Eagle fleet as part of its modernization plan. Starting in November, the Defense Department will begin a “phased withdrawal” over the next two years of the F-15s deployed to Kadena.

Brig. Gen. Ryder said the steady presence “will include advanced fourth-generation and fifth-generation aircraft to backfill the F-15s as they depart.”

However, some former military officials are skeptical.

Retired Air Force Lt. Gen. Dave Deptula, a former F-15 pilot who now serves as dean of the Mitchell Institute of Aerospace Power Studies, said there are problems with the Pentagon’s planned stopgap measure of rotating aircraft through Kadena, noting that the F-22s that are expected to rotate to Kadena are now deployed in Europe to deter Russian aggression there.

“It will stress those aircraft, their pilots, and their maintenance personnel at a time when pilot retention is a serious problem,” Mr. Deptula wrote recently in Forbes. “It also deprives other regional combatant commands of advanced fighter aircraft at a time when demand for them is very high.”

Mr. Deptula also argued that Republican and Democratic administrations have “consistently” underfunded the Air Force and cut its fighter force structure over the past three decades.

Withdrawing the permanent presence of two F-15 squadrons from the Pacific is the inevitable result of decisions that inadequate  investment in replacement aircraft, he wrote, adding: “As a consequence, the Air Force is now the oldest, smallest, and least ready it has ever been in its 75-year history.”

Critics say the F-15 withdrawal plan illustrates a continuing mismatch between the Biden administration’s talking points on the Indo-Pacific and America’s actual commitments in the region. The Pentagon’s new 2022 National Defense Strategy, which was just released, explicitly puts a priority on deterring aggressors.

“We are concerned that [the Department of Defense’s] decision sends the wrong signal, not only to the [ruling Chinese Communist Party] but also to our allies and partners in the Indo-Pacific,” the GOP lawmakers said in their recent letter to Mr. Austin.

And some defense analysts said the Pentagon was making the right call in culling the F-15s from Kadena.

“Removing the F-15s does not significantly reduce American combat power in the Indo-Pacific,” Stacie Pettyjohn, a senior fellow at the Center for New American Security, wrote on Twitter late last month. “These are old 4th-generation aircraft that would not contribute much in a war against China given the PLA’s sophisticated and layered air defenses.”

“Presence,” she added, “does not equal combat credible posture.”

The Pentagon has not made a decision on long-term force levels at the Kadena Air Base, but officials have said “all proposals” are under consideration.