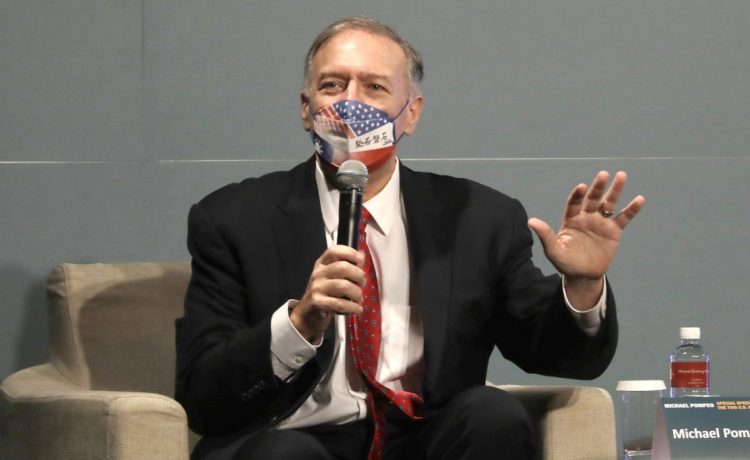 The U.S. should give Taiwan “every tool” it needs to block a Chinese takeover, according to former Secretary of State and potential 2024 GOP presidential candidate Mike Pompeo, who says an “absence of resolve” in President Biden’s foreign policy has invited aggression from adversaries around the world.

Hostile regimes — from Russia and China to Iran, North Korea and Venezuela — sense weakness and are eager to capitalize, Mr. Pompeo said over the weekend, suggesting the art of great-power deterrence that has long undergirded America’s global posture has all but fallen by the wayside over the past two years.

“Deterrence depends on both capabilities and intention, and the administration has not shown the intention to protect the things that matter,” Mr. Pompeo told The Washington Times in a wide-ranging interview during a visit to South Korea, where he appeared at an event promoting deeper U.S. engagement in the Pacific.

While he sidestepped the question of whether he’ll run for president — saying “only the Lord knows” — Mr. Pompeo said he’ll do everything he can to ensure a Republican victory in the congressional midterms.

He also openly expressed concern that U.S. national security agencies including the FBI are under assault from a “political mindset” that threatens to undermine the core mission of protecting Americans.

When asked about the FBI’s raid of former President Donald Trump’s Mar-a-Lago estate in Florida, Mr. Pompeo said it’s imperative to “strip out the politics” from the agency’s day-to-day operations.

He warned of dangerous consequences “when you start prosecuting your enemies” in domestic politics.

More broadly, he suggested Mr. Biden’s foreign policy missteps should factor into Republican efforts to retake Congress and the White House, with this week’s first anniversary of the Taliban’s surge back to power in Afghanistan looming as one of the more disturbing examples.

The administration’s disastrous handling of the U.S. troop pullout set in motion a trend of adversaries pushing the envelope in increasingly aggressive ways, said Mr. Pompeo, who asserted that China, especially, has grown emboldened to advance its interests vis-a-vis Taiwan with confidence that Washington will seek to avoid confrontation.

Mr. Pompeo said he personally supported reducing U.S. forces in Afghanistan, but only under a “certain set of conditions.”

“Every world leader” witnessed the “debacle” of the U.S. withdrawal last year and “saw an America that wasn’t prepared to do the basic blocking and tackling, something that it was fully capable of doing to protect its people and its interests,” he said.

“When they see that — that absence of resolve — I think it increases the likelihood that Xi Jinping will make an aggressive attempt to do what he has long wanted to do, which is to bring Taiwan back inside of the Chinese orbit,” he said, adding that “there is little doubt in my mind that Xi Jinping senses weakness from an American administration.”

His comments coincide with hand-wringing in Washington over the Biden administration’s response to rising Chinese military provocations toward Taiwan following House Speaker Nancy Pelosi’s visit to the island democracy.

Mr. Biden drew bipartisan criticism over his administration’s conciliatory rhetoric around the Pelosi visit. The White House went so far as to publicly warn the California Democrat the trip was “not a good idea” and could unnecessarily provoke China.

The placatory posturing continued even after China responded to the Pelosi visit with live-fire military drills, claiming her trip violated America’s commitment to the “one-China” policy.

The administration has since drawn criticism for resisting a bipartisan push for legislation to revamp the policy by declaring Taiwan a “major non-NATO ally” and authorizing $4.5 billion in security assistance.

Mr. Pompeo, who was a Republican congressman from Kansas before serving as CIA director and secretary of state under Mr. Trump, took issue with the administration’s posturing and defended Mrs. Pelosi’s resolve in visiting Taiwan.

“Once Speaker Pelosi had announced her intention to travel to Taiwan, to have the executive branch … frankly part of her party … come out and say, ‘No we don’t think it’s wise for her to go,’ is exactly the same language that would be used [by] the Chinese Communist Party’s foreign ministry,” he said. “That weakens America, it makes us less secure and certainly presents a lot of risk to Taiwan.”

“[It] was a post-hoc justification for what they’ve wanted to do … to unify Taiwan with China,” Mr. Pompeo said. “The truth is they want to go take over another free and sovereign nation and bring it inside of the Chinese orbit.”

“To protect them from allowing that to happen,” he said, “we should be providing the Taiwanese every tool they need.”

The former secretary of state also accused the current administration of falling short on providing military support to Ukraine to fend off Russia’s invasion.

“There’s been all this talk about we’re going to provide these resources and I think if you ask the Ukrainian military, we have been slow and late and small,” Mr. Pompeo said. “You can disagree on the policy and many do, even inside my own party. But if your policy is to support the Ukrainians and provide them the tools they need to defend their own sovereignty, provide them. Don’t issue a press release, just provide them.”

Mr. Pompeo similarly criticized the Biden administration’s policy of waiting indefinitely for Iran’s hardline Islamist government to accept the president’s offer to reinstate the Obama-era nuclear accord that Mr. Trump pulled the U.S. out of in 2018.

The Justice Department last week announced that an Iranian operative has been charged in a plot to kill Trump-era National Security Adviser John Bolton. Sources familiar with the charges have said Mr. Pompeo was also a target in the plot.

Mr. Pompeo said Iranian leaders have “made no secret” about efforts to “come after” officials of the former Trump administration, which, he argued, was more committed than the Biden administration to ensuring “Iran never got nuclear weapons.”

“The Biden administration is pretty focused on giving them a whole bunch of money, which will ultimately enable them to do just that, to build not only a weapon, but a weapons program,” he said in reference to the administration’s offer to restore sanctions relief if Iran returns to compliance with nuclear enrichment limitations set by the Obama-era deal.

Mr. Pompeo spoke with The Times while in Seoul to participate in a leadership summit, Toward Peace on the Korean Peninsula, hosted by the Universal Peace Federation (UPF).

UPF was co-founded by Hak Ja Han Moon, the leader of the Unification Church and wife of the late Rev. Sun Myung Moon. The two devoted their lives to the promotion of world peace and the reunification of the Korean Peninsula — an undergirding premise of the movement that grew from the Unification Church that Rev. Moon founded in 1954.

The movement has evolved through the decades into a global spiritual movement and an affiliated commercial empire comprising hundreds of ventures in more than a half-dozen countries, including hospitals, universities and newspapers, including The Washington Times.

In his interview with The Times, Mr. Pompeo emphasized the need for a firmer and clearer policy toward North Korea, suggesting the Biden administration’s lack of resolve finds Pyongyang “preparing to conduct a nuclear test.”

More broadly, Mr. Pompeo described “deterrence” as an idea “at the center of keeping America safe.”

“Whether you live in Minnesota or Texas or El Paso,” he said, “you need a strong America that deters.”

He added that the Trump administration’s model was “to use America’s core strength, our economic power, our resources and energy, all the tools that we have that aren’t related to the United States military. And then we’re going to build up a military that says when it’s ‘go’-time, we’re going to be really good.”

He said the Biden administration needs to learn from the Trump team’s combination of clarity about bright lines and willingness to push back if they were broached.

“Our national security team [was also] serious about saying these are the things that matter, we’re going to defend those lines. It wasn’t everywhere and always. It was realistic. It was restrained,” Mr. Pompeo said. “But we were serious about it and I think that kept a lot of the bad guys saying, ‘You know, we think we’ll give the Americans some space for the things that they have demonstrated that they care about.’”

He said that under Mr. Biden, “that’s what’s flipped.”

“When you draw those lines, you set out the boundaries, you have to be prepared to defend them … in a way that the bad guys can see, it’s just not worth the risk,” he said.