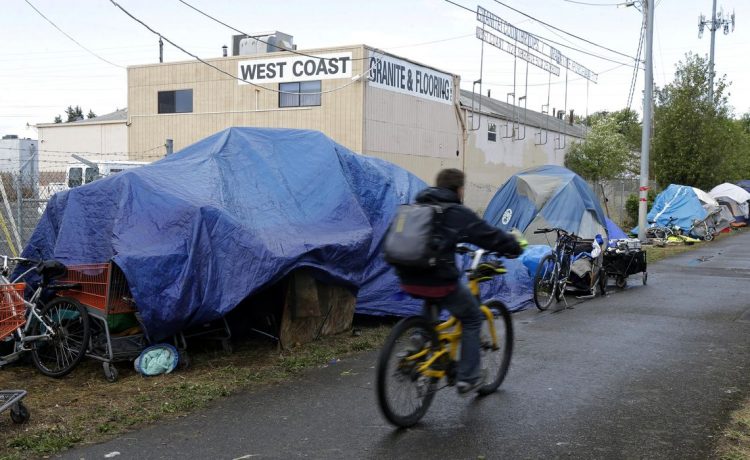 Portland Mayor Ted Wheeler introduced a plan that would move the city’s large homeless population into three campsites while banning camping elsewhere throughout the city.

The three campsites would start with 150 people allowed to move into each one and eventually reach a maximum capacity of 500 inhabitants.

The camping ban would be phased in over 18 months, with the city planning to begin construction on 20,000 affordable housing units by the year 2033, according to Willamette Week.

“The fact is, for the past eight months, we’ve increased alternative camping options without a ban, and to be completely transparent, it has not worked,” Mr. Wheeler said at a press conference on Friday.

Portland’s city council must approve the plan for it to take effect. Mr. Wheeler plus to introduce it at the council’s Wednesday meeting.

The mayor called on the incoming governor, to be elected Nov. 8, to ask Gov. Kate Brown to declare a statewide emergency on homelessness to accelerate the construction of the campsites.

“No government agency in Oregon has more experience putting together temporary outdoor emergency shelter camps than the state,” Mr. Wheeler said in a statement. “With the state’s help, we can get Portland’s designated sanctioned camping areas up before winter.”

Portland has been in a state of emergency over homelessness since 2015. The declaration allows the city to expedite permitting and siting for shelters, as well as build affordable housing. The emergency is set to expire in 2025.

This year, Mr. Wheeler has made two emergency declarations regarding the city’s homeless population. One was to move homeless inhabitants away from high crash zones in the city. The other was to prohibit camping on the walking routes to the city’s K-12 schools.