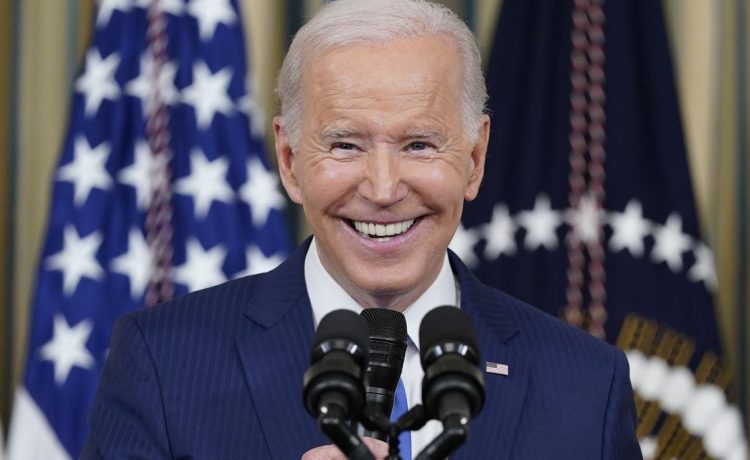 President Biden laughed Wednesday when a reporter told him on the day after the midterm elections that former President Donald Trump’s political movement is still strong.

Mr. Biden dismissed Republicans’ smaller-than-expected gains in Tuesday’s congressional elections, a midterm in which some in the GOP blamed Mr. Trump’s influence for the relatively lackluster showing. The president said his main takeaway was not to change his approach to governing.

“I’m not going to change anything in any fundamental way,” the president said at a rare press conference in the East Room of the White House. “We’re just getting started. While the press and the pundits were predicting a giant red wave, it didn’t happen.”

As for Mr. Trump’s expected announcement next week that he will run again in 2024, Mr. Biden said, “We just have to demonstrate that he will not take power if he does run.”

Mr. Biden took a victory lap Wednesday, arguing that Democrats avoided a shellacking in the midterm elections because his party’s candidates and policies are popular with the American people.

He hailed the election results as “a good day for Democracy,” while acknowledging that not all races had yet been decided.

“We’ve lost very few seats for certain,” Mr. Biden said. “We still have the possibility of keeping the House but it’s going to be close.”

While Republicans are likely to squeak out control of the House, the Senate remains up for grabs with critical races in Arizona, Nevada and Georgia undecided. The Georgia Senate race between Democratic Sen. Raphael Warnock and Republican Herschel Walker appears to be headed to a runoff election that will be decided next month.

The tight midterm races defied expectations of an “red wave” of conservative victories fueled by voter anger towards Mr. Biden’s inability to rein in soaring inflation and crack down on violent crime.

Despite the dismal polls that suggested voters were fed up with Mr. Biden, Democrats had stopped Republicans from major gains in the House and could potentially retain the Senate.

Yet, Mr. Biden enjoyed vindication, staying up past midnight on election night and personally calling nearly 40 victorious Democrats to congratulate them.

Mr.  Biden spent much of the campaign’s final days on defense, shoring up the Democrats’ base by reaching out Black voters. He stayed away from battleground states where candidates feared the president’s unpopularity would drag down their election hopes.

The president was widely criticized for spending his time focused on issues like abortion rights and what he viewed as threats to democracy. Pundits said the president’s midterm message should have zeroed in on soaring prices and inflation.

While saying voters “spoke clearly about their concerns,” Mr. Biden acknowledged that more needs to be done to control rising costs.

Exit polls showed that inflation and abortion were the most important issues driving Americans’ votes.

“There’s still a lot of people hurting. They’re very concerned — and it’s about crime and public safety,” he said. “And they sent a clear and unmistakable message that they want to preserve our democracy and protect the right to choose in this country.”

Still, Mr. Biden said he was optimistic about what he expects to accomplish in the next year of his administration and highlighted his legislative victories so far, including the passage of his massive climate, spending and health bill and his bipartisan infrastructure law.

After two years of Democratic control of Congress, a change in leadership in the House or Senate will eliminate Mr. Biden’s ability to get his top agenda items passed. He has only two months until the end of the year to pass his initiatives while Democrats still control Congress.

Mr. Biden also said that he plans to invite Republican leaders to the White House to discuss how to work together. He was expected to speak with House Republican Leader Kevin McCarthy of California later Wednesday.

The turnover will also make the president and his son, Hunter Biden, and administration officials the target of GOP-led probes. The president said he wasn’t concerned about that prospect.

“Lots of luck in your senior years, my coach used to say,” Mr. Biden said of the anticipated GOP probes. “I think the American public wants us to move on. … It’s almost comedy [from Republicans]. I can’t control what they’re going to do. All I can do is continue to try to make life better for the American people.”

Republican lawmakers will likely chair powerful committees giving them the authority to issue subpoenas, compel witness testimony and launch investigations. Some Republicans in the House have already sent over 500 preservation letter requests to Biden administration officials as they gear up for their new oversight powers.

Mr. Biden had acknowledged the obvious on Monday — that the next two years would be “more difficult” if Republicans take control.

The president also said again that he intends to run for re-election in 2024, but won’t make a final decision until early next year after consulting with his family.

Asked whether he would rather run in 2024 against Mr. Trump or Florida Gov. Ron DeSantis, who won a second term Tuesday by a huge margin, the president suggested that a GOP primary battle between the two party heavyweights would be damaging for both.

“It’d be fun watching them take on each other,” Mr. Biden said.

— Dave Boyer contributed to this report.