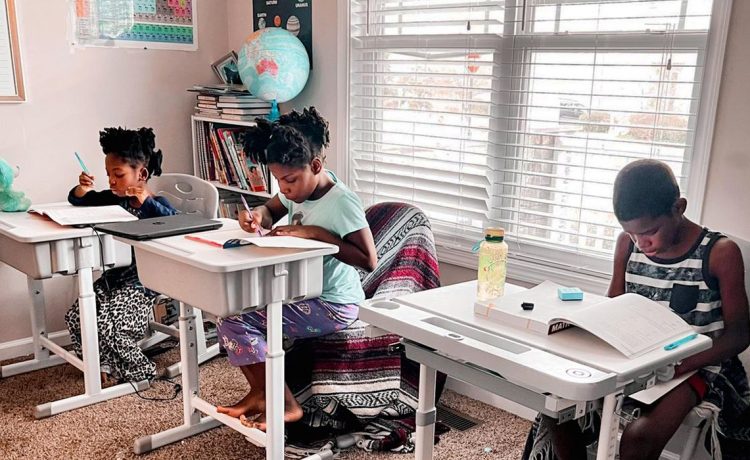 Eleanor Jones started homeschooling her learning-disabled son in the fall of 2020 when Maryland’s public schools were virtual — and she’s had no desire to send him back since they’ve reopened.

Now 10, her son was born with severe hearing loss due to a congenital inner ear anomaly. He wears cochlear implants to hear, suffers from a processing disorder and reads lips to understand others at his home in Westminster, 36 miles northwest of Baltimore.

Ms. Jones is among the millions of parents who pulled their kids out of K-12 public schools to avoid hybrid learning and mask mandates during the pandemic. And their number is growing even as the pandemic fades.

Discontent with the state of public education is sparking an enrollment boom in homeschooling groups and private schools, even as falling birth rates drive public school enrollment down.

According to the Seattle Public Schools, enrollment in the citywide district has fallen yearly from 53,630 students in 2019-2020 to a projected 49,550 this year. The district projects enrollment will keep declining steadily to 46,910 students in the 2025-2026 school year.

Statewide, the Washington Office of Superintendent of Public Instruction reports the number of homeschooling students swelled from 20,844 children in October 2019 to 32,056 in October 2021.

The Washington Homeschool Organization, a volunteer group of parents, says the actual number is likely higher.

“There are many families in Washington engaging in non-legal ‘pod schools’ and ‘micro-schools,’” said Jen Garrison Stuber, the organization’s advocacy chair.

The National Catholic Educational Association says enrollment in U.S. Catholic schools increased by 62,000 in 2020-21 to about 1.68 million students last year. It was their first annual increase in two decades and the biggest in 50 years of recorded data.

In Florida, the Diocese of Venice reports Catholic school enrollment has jumped by 26%, from 4,400 students in 2020-2021 to 5,900 students this month. The diocese operates 15 schools in five southwest Florida counties.

“For the last two years, we were open and in-person, never closing a school or a classroom. Families have also responded to our rigorous curriculum and faith-based education,” said the Rev. John Belmonte, the diocese’s superintendent of Catholic schools.

Experts say many parents relocated from large urban centers like New York City to lockdown-light Florida during the pandemic — and they’re not moving back.

“Some of the decline, particularly in large cities, was probably related to parents seeking better options during the years of COVID school closures,” said Ray Domanico, former director of education research at New York City’s Independent Budget Office and current senior fellow at the Manhattan Institute. “Some changed states, others switched to charter or private schools.”

As they reopen this month, public schools are also grappling with a youth mental-health crisis, a national teacher shortage, a parental backlash against “woke” curriculum and fears of mass shootings.

In an annual poll released earlier this month, Gallup found that 42% of U.S. adults say they are satisfied with the quality of the nation’s K-12 education, a two-decade low and the second-lowest reading in 23 years. A near-record high of 51% expressed satisfaction in August 2019, before the pandemic.

As discontent with public education grows, enrollment is falling hardest among K-3 students.

In July, the D.C. Policy Center reported that enrollment growth in Washington, D.C. public schools and public charter schools had “stagnated” in general and “even declined” among lower grades after years of steady increases.

In a statement emailed to The Washington Times, a spokesperson for the National Education Association cited the nation’s shrinking population of young people as a factor in the decline.

According to the latest data from the U.S. Census Bureau, the U.S. birthrate has declined steadily since 2008 and dropped faster during COVID before rebounding slightly in March 2021.

“The consistently shrinking U.S. birth and immigration rates over the last decade are critical and persistent factors affecting school enrollment,” the NEA said.

“These are school districts that remained closed much longer than most other systems,” said Meg Kilgannon, senior fellow for education studies at the conservative Family Research Council. “No surprise, then, that parents vote with their feet and leave the system when pleading with school boards to reopen schools in these locations didn’t work.”