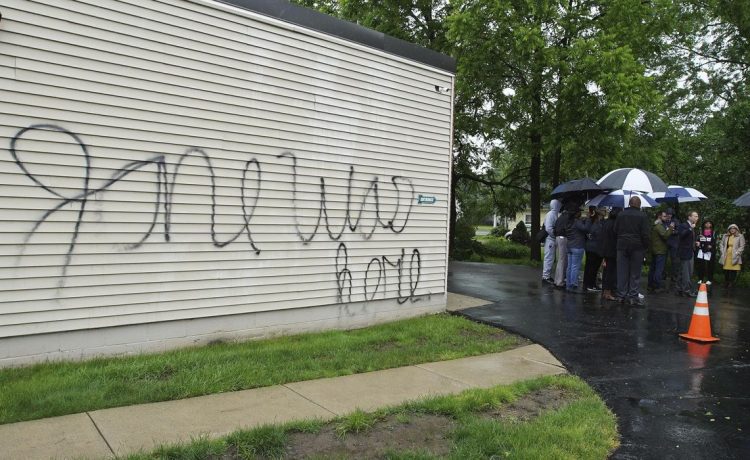 OMAHA — The first note threatened to “shoot up” a Catholic student center if pro-lifers succeed in their quest to ban abortions within the city limits of Bellevue, Nebraska. A second note was found taped to the door of an evangelical Christian church.

Now the FBI and police are investigating the messages claiming to be from the radical pro-choice group Jane’s Revenge, which has taken responsibility for nearly two dozen attacks this year on pro-life facilities and churches nationwide.

The group also said in a July post on noblogs.org that “the attacks will surely continue with increasing frequency.”

If the activists seeking to declare Bellevue a “sanctuary city for the unborn” are scared, however, they’re not showing it.

“We’re fully forging ahead,” said Mark Lee Dickson, founder of the Texas-based Sanctuary Cities for the Unborn Initiative. “We’re about halfway through right now and we’ve got a ways to go, but we’re not stopping. We’re going to finish collecting signatures and we’re going to push this before the city council. We want a vote in Bellevue, Nebraska, to outlaw abortion.”

He said volunteers from East Texas plan to join a coalition that includes Nebraskans Embracing Life and Students for Life Action in collecting the signatures needed by February to place the proposal before the city council.

If the council declines to pass the proposed ordinance, it would go before the voters in a special election.

Certainly, threats are nothing new to the pro-life movement in the aftermath of the Supreme Court’s June 24 decision in Dobbs v. Jackson, which overturned the 1973 ruling that made abortion a federal constitutional right and returned the issue to the states.

At least 177 churches, pro-life pregnancy centers, offices and churches have been vandalized since the draft opinion was leaked May 2. Three centers were firebombed. A pro-life canvasser was shot in September as she went door-to-door in Lake Odessa, Michigan.

The man who shot the canvasser was charged with assault — he said it was an accident — but so far the FBI has announced no arrests in the attacks on the pro-life facilities, frustrating the movement’s leaders.

“We are headed towards tragedy if law enforcement does not act,” said Kristan Hawkins, Students for Life president, in a statement after the notes were found.

Nebraska Gov. Pete Ricketts denounced the threatening messages and blasted the Justice Department under President Biden for its lackluster response, saying it had “failed to prosecute a single one of these attacks.”

“Since May, pregnancy resource centers and pro-life organizations have been threatened, vandalized, and even firebombed with Molotov cocktails,” Mr. Ricketts said. “It’s domestic terrorism, plain and simple.”

Students for Life was holding a training Dec. 3 for student activists at the St. John Paul II Newman Center in Omaha when the first note was discovered taped to the front of the building.

The message printed in pen said: “If our right to abortion in Bellevue is taken away due to the attempt to pass an abortion ban and it gets passed we will shoot up your Newman center with our new AR14 rifles. Sincerely, Jane’s revenge.”

The second note, found on the same day taped to a door at the Christ Community Church in Omaha, threatened the lead minister and the church, and was also signed by Jane’s Revenge.

“The gist of the letter was that if the abortion ban in the nearby city of Bellevue NE goes into effect, the church would be shot up. That said, we are still open for business,” said Jim Ratte, executive director of ministry support, in an email.

He also said he didn’t know why the church was targeted, given that it’s located in Omaha, not neighboring Bellevue, and that “most of the congregation including myself was unaware of the sanctuary city movement in Bellevue.”

The FBI Omaha is investigating the threats in coordination with the Omaha Police Department and the Department of Public Safety at the University of Nebraska, Omaha.

Omaha Police Officer Chris Gordon said the “threats are being taken seriously and the investigation is ongoing.”

No other notes have been found.

If the threats were in fact sent by extremists with Jane’s Revenge, it would indicate that a new front has opened in the shadowy extremist group’s anti-abortion terrorism campaign, namely, the fast-growing sanctuary movement.

Since 2019, 61 cities or counties have approved ordinances declaring themselves “sanctuary cities for the unborn,” the effect of which is to ban abortion within the city limits. Eight of those are in Nebraska.

The initial ordinances were mainly symbolic because they were passed in small towns with no abortion clinics, but that’s changing.

The city of Lubbock, Texas, population 259,000, became the first jurisdiction clinic with an abortion facility to adopt sanctuary status after a measure was approved by the voters in May 2021.

Bellevue, which has a population of over 63,000, is home to one of two facilities run by the Clinics for Abortion and Reproductive Excellence [CARE], which offers abortions up to 20 weeks gestation, the limit for most procedures in Nebraska.

The group’s other clinic is in Bethesda, Maryland.

Pro-life advocates filed the Bellevue petition in August, after Mr. Ricketts said he didn’t have the votes to limit most abortions to 12 weeks gestation.

The proposed ordinance would ban abortions, including the use of abortifacient drugs, within the city limits except to save the life of the mother.

The ordinance would also prohibit aiding or abetting an abortion by, for example, providing transportation, lending money, or giving instructions over the telephone or internet.

Dr. LeRoy Carhart, the founder of CARE, said he would follow the law if the ordinance is approved, which could mean relocating from Bellevue, according to the Omaha World-Herald.

“Any type of restriction, especially one of this magnitude, would be detrimental to the health and well-being of all the members within our community,” said Dr. Carhart, who successfully brought a 2000 case against the state’s ban on partial-birth abortion, a procedure later prohibited by Congress.

In the aftermath of the Dobbs decision, Mr. Dickson’s group has sought to foil abortion providers seeking to open facilities in Colorado and New Mexico as they become pregnancy-termination destinations for women in nearby red states, particularly Texas.

Last month, the city of Hobbs, New Mexico, which lies four miles from the Texas border, approved a “sanctuary city for the unborn” ordinance aimed at blocking clinics from setting up shop by banning abortion-inducing drugs or supplies from being sent through the mail.

As the signature deadline nears, Mr. Dickson said that volunteers are taking precautions, as they always do, given the heated emotions surrounding the abortion debate.

“We’ve got to be extremely careful, but we’ve got a job to do,” he said. “It’s not always safe to stand out on a sidewalk to offer pregnancy resources. But it’s what we’re called to do. If that means we get Coke bottles thrown at us, or even death threats, that’s part of this battle. We’re not going to stop getting signatures. We’re going to get every signature.”