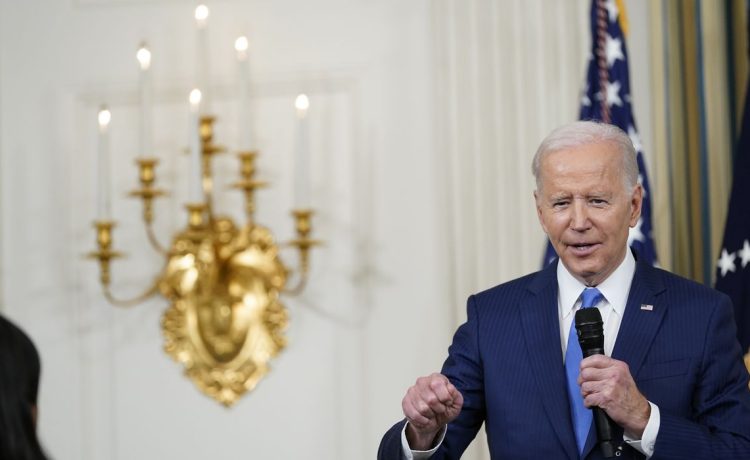 A left-wing group launched a campaign to boot President Biden off the Democratic ticket in 2024 and vowed to put up a fight if he does run.

The grassroots organization RootsAction, which backed Vermont democratic socialist Sen. Bernard Sanders’ run for the Democratic presidential nomination in 2016 and 2020, rolled out its “Don’t Run Joe” digital ad campaign on Wednesday. It targeted Democrats in New Hampshire — the state that traditionally hosts the first presidential primary.

RootsAction said too much is at stake in 2024 and that Democrats “shouldn’t gamble on Joe Biden’s low approval rating.”

In a statement on the Don’t Run Joe website, the group’s backers said that renominating Mr. Biden would be a “tragic mistake,” emphasizing that in 2024 the U.S. will face the “dual imperatives of preventing a Republican takeover of the White House and advancing a truly progressive agenda.”

“A president is not his party’s king, and he has no automatic right to renomination,” the statement said. “Joe Biden should not seek it. If he does, he will have a fight on his hands.”

The activists boast an email list of 1.2 million supporters throughout the U.S.

The White House insists the president intends to run for reelection, but party loyalty outside 1600 Pennsylvania Avenue is endangered by Mr. Biden’s persistently low approval rating.

Rep. Alexandria Ocasio-Cortez, a liberal Democrat from New York, outright refused to endorse Mr. Biden in a television appearance in June. Democratic Reps. Carolyn Maloney and Jerrold R. Nadler cast doubt on Mr. Biden’s bid for reelection while on the debate stage in New York. Ms. Maloney later walked back her remarks, only to double down on her assertion that “he’s not running again” in a remark to The New York Times editorial board.

The New York Times published an opinion piece in August headlined “Hey Joe, Don’t Give It a Go.”

The murmurs cooled briefly following Mr. Biden’s string of legislative victories and a slight boost to his approval rating in late summer.

But a Reuters-Ipsos poll released this week showed Mr. Biden’s approval rating is once again dipping to 39%, down from 40% last month, even as the president made his rounds throughout the country to tout his accomplishments ahead of the midterms.

Nearly one-third of respondents said the economy is the country’s biggest problem — an issue Mr. Biden attempted to brush off in his appeals to midterm voters despite the growing consensus that the U.S. is entering a downturn.

While Republicans are on track to control the House, the overwhelming GOP sweep that was anticipated ultimately did not pan out.

That put some spring in Mr. Biden’s step. His main takeaway was not to change his approach to governing.

“I’m not going to change anything in any fundamental way,” the president said at a rare press conference in the East Room of the White House on Wednesday. “We’re just getting started. While the press and the pundits were predicting a giant red wave, it didn’t happen.”

He doubled down in defense of his agenda Thursday while pledging to work across the aisle to bring prices down.

“I will work with anyone — Democrat or Republican — on ideas to provide more breathing room to middle-class and working families,” he said. “And I will oppose any effort to undo my agenda or to make inflation worse.”

“We are on the right path — we need to keep moving forward to build an economy from the bottom up and the middle out,” he said.

Despite the discontent within the party about Mr. Biden seeking reelection, Democrats face an increasingly tough decision, especially given the growing expectation that former President Donald Trump will run in 2024.

“One of the great ironies right now … is that as unpopular as Biden is, and as much as he consistently gets beaten by Trump in a potential head-to-head for 2024, he does better than the other likely suspects on his side,” said Patrick Basham, director of the Washington-based Democracy Institute. “They are venturing into a really difficult set of challenges.”