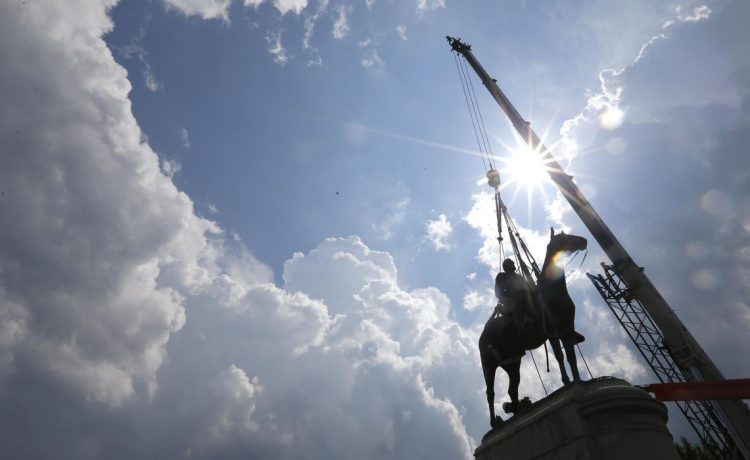 RICHMOND, Va. (AP) — The former Confederate capital has secured an $11 million grant to build an interpretive center that city officials hope will someday be part of an ambitious, long-envisioned memorial campus honoring the memory of enslaved people.

Richmond’s grant is among more than $16 million in total funding The Mellon Foundation is providing to recipients in Virginia’s capital city for projects that are “examining, preserving and reimagining” its “rich historical narratives,” the New York-based nonprofit told The Associated Press ahead of a formal announcement Tuesday.

Among the other grant recipients are a public art project, a museum and an initiative uplifting the story of a historically Black neighborhood. All are part of a push in Richmond – which recently removed its massive collection of Confederate statuary – to highlight other parts of its history.

“Richmond has been the site of many stories that have shaped our understanding of who we are as Americans, but public commemoration in Richmond historically has been limited to only a few,” Elizabeth Alexander, president of the Mellon Foundation, said in a statement.

“Today, the people of this city are lifting up the collective memory of its historic Black communities, unflinchingly addressing the city’s past as the capital of the state with the most enslaved people prior to the Civil War, and participating in the reimagining of the city’s public spaces to better reflect the fullness of its history,” Alexander said.

City officials said in an interview and in written plans shared with AP that the $11 million grant will fund the creation of an “interpretive center” in 12,300 square feet of space in the first floor of the sleek, glassy trainshed of historic Main Street Station, a landmark visible to motorists cutting through the city on Interstate 95.

Officials hope the center will be a space to welcome and orient visitors to Shockoe Bottom, one of the oldest neighborhoods in one of America’s oldest cities. The neighborhood was once a hub in the domestic slave trade, though that history is barely visible now.

Hundreds of thousands of men, women and children were jailed, bought and sold in Richmond, and shipped across the South in the decades preceding the Civil War. For a time, Richmond was second only to New Orleans as a slave-trading center.

Community activists have long pushed for public site in the neighborhood telling that history and honoring enslaved people, but the initiative has moved forward in fits and starts.

The preservation of Shockoe Bottom rose to national attention in 2014 when former Mayor Dwight Jones proposed a baseball stadium-centered economic development project in the area that was ultimately scuttled in the face of outrage from community members who said Shockoe Bottom was sacred ground.

Today, modest remembrances to the neighborhood’s slave-trading past are tucked away in a hard-to-find area adjacent to I-95, a parking lot and rumbling train tracks.

In 2020, Richmond officials joined by community activists outlined plans for a Shockoe Bottom heritage campus that would include a museum and a park for reflection. The state has chipped in funding and the city has set aside almost $28 million for the project, including the museum planning, which is in its earliest stages, faces flooding-related zoning hurdles and will require significant additional money.

The interpretive center will offer “a space to educate and immerse audiences in the history of Shockoe and is one of the first steps in bringing the larger Heritage Campus to fruition,” Mayor Levar Stoney said in a statement.

Officials say the center will provide educational and artistic content about Richmond’s role in the slave trade, and space for visitors to Shockoe Bottom to escape the elements and orient themselves to the neighborhood, which includes other historical sites, including the Virginia Holocaust Museum.

Among Mellon’s other Richmond grantees is The Valentine Museum, which is dedicated to the city’s history, and plans to use the money in part to “reimagine” the studio of Edward Valentine, a sculptor of Confederate figures.

The foundation is also backing The JXN Project, an initiative aimed at telling the story of the role Richmond, and especially the historically Black Jackson Ward neighborhood, played in the Black American experience.

Also receiving support are Reclaiming the Monument, a public art project that captured national attention for its projections on the now-removed base of an enormous Robert E. Lee statue; Untold RVA, an existing project that aims to tell hidden histories; and Cary Forward, which plans a “multidisciplinary arts space, interpretive center, artist/scholar residency, and archival library.”

The foundation said its award to Richmond was the first ever grant to a municipal government from its Monuments Project, a $250 million funding commitment launched in 2020 that aims to reimagine history-telling in public spaces.

In an interview, Alexander said the project had supported initiatives including the Kansas relocation of an approximately 25-ton stone considered sacred to the Kaw Nation, and the Irei project, an effort to build a memorial to people of Japanese ancestry incarcerated in camps during World War II.

In Richmond, which Alexander said she visited over the summer, the foundation found a city unusually eager to “contend and grapple” with its past.

“The only way to move forward anyplace is to really look truthfully at our past and to envision a better future that is based on truth-telling and reckoning,” Alexander said.

The foundation, which was established in 1969 by the children of industrialist, statesman and philanthropist Andrew W. Mellon, bills itself as the nation’s largest supporter of the arts and humanities.