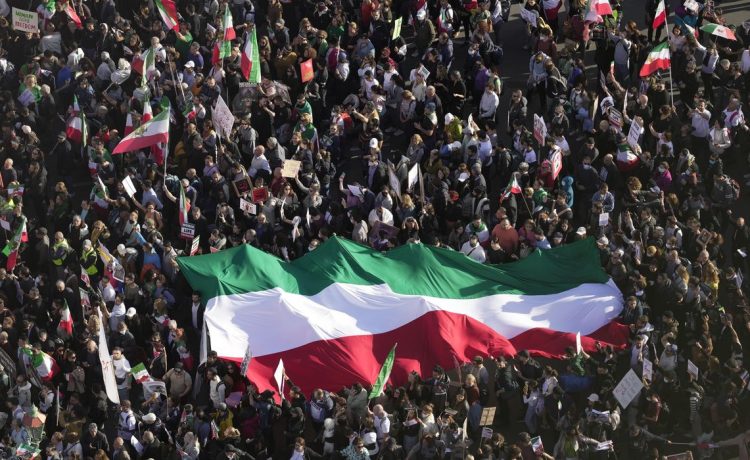 BERLIN (AP) — Tens of thousands of people gathered in Germany’s capital Saturday to show solidarity with antigovernment protesters in Iran, where a movement sparked by the death of a woman in the custody of morality police has evolved into a challenge to the Islamic Republic.

Berlin police estimated that 37,000 people had joined the German demonstration by late afternoon. Participants held up Iranian flags and signs criticizing Iran’s leaders, many with the tagline “Women, Life, Freedom” in both English and German.

The demonstration, organized by the Woman(asterisk) Life Freedom Collective, began at the Victory Column in Berlin’s Tiergarten park and continued as a march through central Berlin.

Some demonstrators said they had come from elsewhere in Germany and other European countries to show their support.

“It is so important for us to be here, to be the voice of the people of Iran, who are killed on the streets,” said Shakib Lolo, who is from Iran but lives in the Netherlands. “And this is not a protest anymore, this is a revolution, in Iran. And the people of the world have to see it.”

Other issues were the focus of demonstrations in Berlin as well, including one calling for social solidarity in the wake of a potential energy crisis and another advocating a speed limit on German highways.

In Tehran, more antigovernment protests took place Saturday at several universities. The nationwide movement in Iran first focused on the country’s mandatory hijab following the Sept. 16 death of 22-year-old Mahsa Amini while in the custody of the morality police.

Security forces have dispersed gatherings with live ammunition and tear gas, leaving over 200 people dead, according to rights groups.

The government in Tehran also has been in the spotlight in European capitals due to allegations that Iran has supplied explosive drones that Russian troops are using in Ukraine.