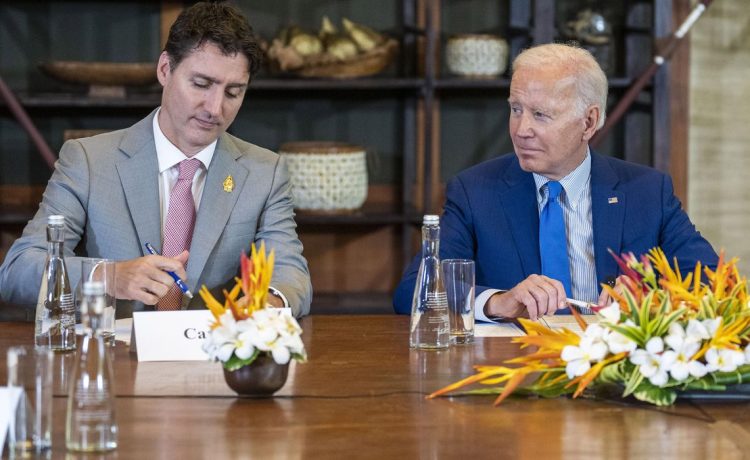 Expanding the U.S.-Canada–Mexico economic relationship in the face of a looming global recession is a central focus of President Biden’s meeting this week with his Mexican and Canadian counterparts — a summit of three leaders overseeing the world’s single most powerful free trade alliance.

Mr. Biden has benefited from former President Donald Trump’s success in reforming the alliance through the 2020 U.S.-Mexico-Canada Agreement (USMCA), the output of which accounts for no less than a third of the world’s total GDP.

Administration officials say they are keen to continue growing the tripartite juggernaut, even as other factors weigh on the summit playing out Monday and Tuesday in Mexico City.

The reliability of Mexico‘s claim to be cracking down on illegal fentanyl production and smuggling into the United States hangs over Mr. Biden’s meeting Monday with Mexican President Andres Manuel López Obrador.

National Security Council spokesman John Kirby expressed optimism to reporters at the White House ahead of Mr. Biden’s trip, pointing to coordination between U.S. and Mexican law enforcement on the fentanyl crisis.

“We’re going to continue to work with them in lockstep to see what we can do jointly to try and limit that flow,” said Mr. Kirby, who praised last week’s arrest by Mexico of Ovidio Guzman, a son of former Sinaloa cartel boss Joaquín “El Chapo” Guzman, currently in U.S. federal prison.

The surging number of migrants at the U.S.-Mexico border is another sticky subject dominating Monday’s Biden-López Obrador meeting.

The gathering of the two presidents and Canadian Prime Minister Justin Trudeau marks the first time Mexico has hosted a U.S. president since 2014.

Mr. Biden arrives at the Palacio Nacional in Mexico City on Monday afternoon, meeting with Mr. López Obrador before Mr. Trudeau joins them for dinner. Mr. Biden and Mr. Trudeau will hold talks Tuesday, with the three leaders then gathering for a group discussion.

“Our partnership with Canada and with Mexico is crucial to our economic security, prosperity, democratic stability and, of course, migration management,” said Mr. Kirby. “This North American Leaders’ Summit will give us all an opportunity to strengthen those partnerships and advance shared priorities for North America.”

An analysis published Friday by the pro-business group Americas Society and Council of the Americas (AS/COA) noted the expansion of U.S.-Canada–Mexico trade over the past decade, including under the Trump-era renegotiation of the North American Free Trade Agreement (NAFTA) into the USMCA.

“Regional integration has made North America an economic powerhouse. The region accounts for a third of global GDP, and its combined GDP has more than doubled over the past decade,” the group added, asserting that “more than 5 million jobs in the United States depend on trade with Mexico.”

The analysis characterized the three-way economic bond as having the potential to undergird U.S. efforts to secure North American supply chains “nearshoring” policies of moving manufacturing geographically closer to the U.S. homeland.

Some analysts say Mexico is poised to benefit from Washington’s embrace of such policies in the wake of COVID-19 global supply disruptions, as well as in the face of potential future disruptions caused by mounting economic competition and geopolitical tensions with China.

Mexico stands to gain as U.S. companies reconsider their relationships with China, according to The Associated Press, which has noted that Mexico’s proximity to the U.S. and existing trade agreements could be incentives for American factories to relocate south of the border.

Analysts at Bank of America estimated in October that Mexico could increase its trade by as much as 30% if more supply chains returned to North America. The report notes there had already been a bump in Mexican manufacturing as U.S. policymakers and businesses increasingly focused on bringing more trade to allied countries that are near American consumers.

“Every country is arriving with different priorities, but there is common ground,” said Enrique Perret, managing director of the U.S.-Mexico Foundation, a think tank focused on cooperation between the two nations. “It’s competitiveness, it’s economy, it’s education, it’s labor mobility.”

The U.S. imported more than $380 billion worth of goods from Mexico through the first 10 months of 2022 — the third-largest source of imports after China and the European Union, according to the U.S. Bureau of Economic Analysis.

For its part, Canada is the fourth-largest U.S. partner by imports, with the State Department calling it “the world’s most comprehensive trading relationship.” The U.S. and Canada are each other’s largest market for exports, and Canada is the largest foreign supplier of energy products to the U.S.

There are, however, points of economic and other tension in the alliance.

U.S. and Canadian officials, for instance, say the López Obrador administration is trying to favor Mexico’s state-owned utility over power plants built by foreign and private investors, something forbidden under the USMCA.

Mexican and Canadian officials, meanwhile, have expressed wariness toward Mr. Biden’s overall “Buy America” plan. While the administration’s push for an expansion of electric vehicle manufacturing could be a boon to both nations because of the tax credits for North American batteries, there is concern the U.S. allies will be left behind.

And then there is fentanyl. The U.S. Drug Enforcement Administration seized 50.6 million fentanyl-laced fake prescription pills in 2022, up from 20.4 million in 2021, according to the recent AS/COA analysis.

The DEA has also identified the Sinaloa and Jalisco drug cartels as “primarily responsible” for producing the fentanyl flowing into the United States, using precursors sourced from China and other parts of Asia, the analysis said.

On a positive note, the AS/COA pointed to a High-Level Security Dialogue (HLSD) launched between the U.S. and Mexico in October 2021, noting that both have subsequently emphasized fentanyl and arms smuggling as top bilateral concerns.

A statement from the second annual U.S.-Mexico HLSD in October 2022 asserted that Mexican authorities were making “historic seizures of fentanyl,” while also noting that U.S. Customs and Border Protection officials “seized an average of more than 800 pounds of fentanyl each month in 2021.”