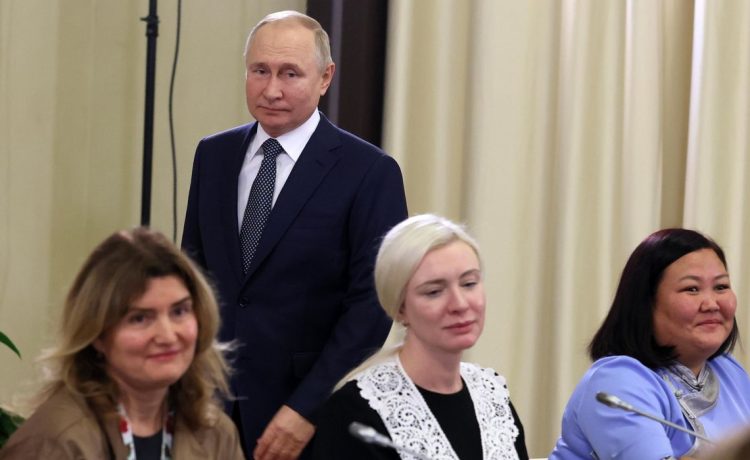 Russian President Vladimir Putin met with more than a dozen mothers of soldiers who are serving in Ukraine or have died during a war that began nine months ago with Moscow’s invasion in February.

Speaking to them ahead of Mother’s Day, observed in Russia on the last Sunday of November, Mr. Putin on Friday said their service and sacrifice during the “Special Military Operation” in Ukraine is not in vain.

“I would like you to know that I personally, and the whole leadership of the country, we share your pain,” he said, occasionally appearing out of breath in a meeting broadcast on Russian television. “We understand that nothing can replace the loss of a son — especially for a mother. We will be doing everything so you don’t feel forgotten.”

Russian reservists who were recalled to service have been killed in large numbers during frontal assaults into well-established Ukrainian defense zones around the town of Bakhmut in Donetsk Oblast. Meanwhile, British military intelligence officials said that other raw troops near the village of Svatove in the Luhansk Oblast have come under heavy Ukrainian artillery bombardment after being ordered to dig a trench system in the area.

“The Kremlin will likely be concerned that an increasing number of reservists’ families are prepared to risk arrest by protesting against the conditions their relatives are serving under,” the UK’s Defense Ministry said on Twitter.

Some Russian mothers criticized Mr. Putin for talking to carefully selected family members who would ask questions that were agreed to beforehand.

“Do you have the courage to meet us face to face, openly, not with pre-agreed women and mothers who are in your pocket, but with real women who have traveled from different cities here to meet with you? We await your answer,” Olga Tsukanova, with the Council of Mothers and Wives, said on the Telegram messaging site, according to Reuters.

Moscow confirmed that more than 200,000 Russian reservists have been drafted into the country’s armed forces since Mr. Putin ordered a partial mobilization in September. The move has proved controversial in Russia, sparking demonstrations that have been put down with great force and an exodus out of the country by tens of thousands of draft-eligible men.

“Their deployment is often characterized by confusion over eligibility for service, inadequate training and personal equipment, and commitment to highly attritional combat missions,” British military officials tweeted. “Many are being compelled to serve with serious, chronic health conditions.”

Mr. Putin told the Russian mothers they shouldn’t believe the negative reports of the conditions their soldiers are facing in Ukraine, calling the internet a haven for “fakes, lies and deception.”

“You can’t trust anything you see there. It has always been that way,” he said. “Information is also a weapon and the information attacks are an effective way of fighting.”