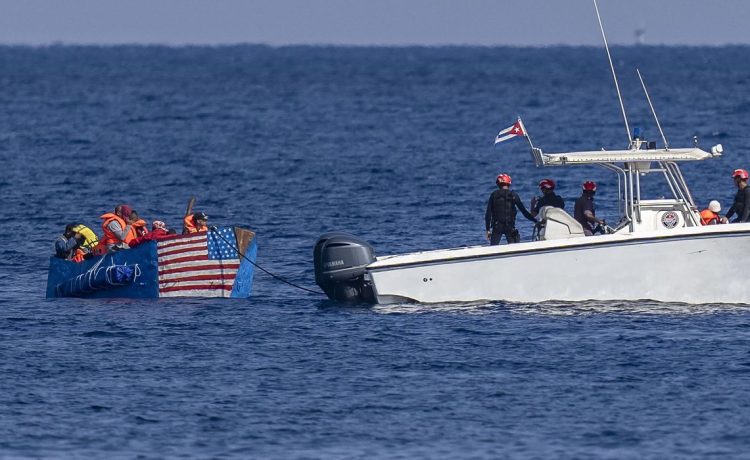 HAVANA — Onlookers scratched their heads at a peculiar scene just off the coast of Havana on Monday – Cuba’s coast guard intercepted nearly a dozen passengers from a scrappy blue handmade raft with an American flag painted along the bow.

Handmade rafts are hardly out of the ordinary in Cuba, where innumerable vessels set off in attempts to reach Florida’s shores. Growing waves of migrants have abandoned the Caribbean island in the past year by land, air and sea, an exodus fueled by a complex mix of deepening and compounding crises in Cuba.

Many such migrants – often referred to as balseros – usually set off in rafts from remote parts of the island, shrouded by darkness to avoid being intercepted.

On Monday, The Associated Press – amid a pack of journalists scrambling to decipher what was happening – watched as the passengers were taken from the raft in broad daylight, not 500 meters from the American Embassy, just off the city’s iconic Malecón seawall.

The coast guard then dragged the craft, journalists running in tow, along the Malecón and into a port as one Spanish-speaking onlooker screamed “Let them leave!” Many more Cuban onlookers seemed confused.

Cuban officials acknowledged what happened in plain sight, but didn’t explain it.

“We saw the same thing but we don’t have more details,” one Cuban official told The Associated Press.

Basic access to information is rare and reality can bend the imagination in Cuba. But the incident happened at a notable time.

Last month, the government strenuously denied causing the deaths of seven people, including a two-year-old girl, when its coast guard collided with the boat of a group of migrants traveling by night, further off shore. Some survivors accused the government of repeatedly ramming the boat.

Most emigrants seek to enter the United States through the U.S.-Mexico border, where Cubans were stopped nearly 221,000 times this fiscal year, a 471% increase from the year before, according to U.S. Customs and Border Protection data.

That migration, combined with the reopening of U.S. visa and consular services on the island, has accelerated talks between the two governments, which share a historically tense relationship.

The latest came this weekend, as three visiting Democratic congressmen met with Cuban President Miguel Díaz-Canel and other Cuban leaders. The lawmakers left the island on Monday, American officials told the AP.

U.S. authorities also noted that migration was among the topics discussed.