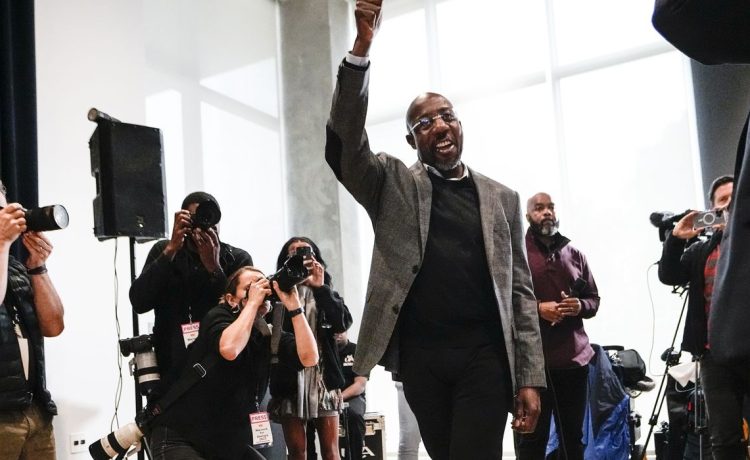 Republican Hershel Walker held a virtual rally with former President Donald Trump and appealed to voters in the northern part of the state.

For many Georgia voters, the last-minute jockeying was irrelevant. They’d already voted in the runoff election for U.S. Senate.

Nearly 1.9 million ballots have already been cast or roughly half the total votes cast a month ago when Mr. Warnock and Mr. Walker each fell short of the 50% mark and ended up in Tuesday’s runoff election.

Massive early voting has become standard in American elections in recent decades, upending the way campaigns usually fight in the final stretch of the race.

In Georgia, an analysis by Targetsmart, a Democratic firm, found 52% of the early votes were cast by registered Democrats. Just 39% were cast by Republicans.

“I’m inspired by this strong early vote turnout — I am,” Mr. Warnock said at a recent campaign rally before flashing a grin. “But I don’t want us to be lulled to sleep.”

“Republicans have a lot of folks who are turning out and a lot more that are going to turn out, let’s keep the momentum on our side,” Mr. Paradise said last week.

Jon Couvillion, a pollster with JMC Analytics, said the campaigns are working to spin the facts in their favor, eager to keep voters engaged.

“You are basically creating a positive momentum and by having that positive momentum, not only does that give the candidate the boost they need to step it up on Election Day, it also makes the donors feel good,” Mr. Couvillion said. “If you are pumped you are going to put in that extra effort to get out every voter you can.”

The Georgia election is the last Senate race on the board. If Mr. Warnock wins, it will give the Democratic Caucus an outright 51-seat majority, which gives them slightly more wiggle room in the narrowly divided chamber.

On Monday, Mr. Walker made five campaign stops across the state, shaking hands, snapping photos and signing shirts for his supporters.

He focused his attention on voters in the Atlanta suburbs and in the northern slice of the state where he ran behind Republican Gov. Brian Kemp in the midterm election. Analysts say these voters are key to him pulling out a win.

“I think a vote for Warnock is a vote for these failed policies, a vote for me is for a better coming,” he said.

Mr. Trump was slated to headline a virtual event on behalf of Mr. Walker as part of a last-ditch effort to rally the base of the party.

Mr. Warnock also held a series of campaign stops, joining forces with fellow Democrat Sen. Jon Ossoff at Georgia Tech where he urged students to get their friends and families to the polls.

“Call Loddie Doddie and everybody, tell them it’s time to vote,” Mr. Warnock said. “Tell them a vote is a kind of prayer for the world we desire for ourselves and our children.

“Tell them your vote is your voice, and your voice is your human dignity,” he said. “I believe in voting. I believe in democracy. I am proud to be an American.”

Polls show Mr. Warnock with a slight edge, and analysts say the early voting tallies show why. He’s been able to bank a significant number of early votes and just needs to concentrate on voter turnout around the Atlanta area on Tuesday.

That the Republican finds himself in an early-voting hole is strange. In most states, the GOP would build an early-vote lead, and the question was usually whether Democrats could surmount it with Election Day turnout.

Analysts say Mr. Trump helped squander that advantage with his attacks on voting in the last presidential election.

“Republicans had an advantage in mail-in ballots prior to the 2020 election and Trump destroyed that,” said Michael McDonald, professor of political science at the University of Florida who specializes in elections.

He said Democrats were making headway thanks to former President Barack Obama, who put a particular emphasis on early voting in 2008, assisted by new technology that allowed campaigns to more precisely track and target voters.

With some states moving to all-mailed ballots and most states allowing easy early voting, it’s common for states to have more votes cast before Election Day.

“We have such a high volume of it, and for better or worse, it has forced the campaigns to adapt, and it changes the dynamic of the election,” Mr. McDonald said.

Campaigns and their allies have had to rethink their approach. A candidate that counts on a last-minute October surprise or a powerful closing argument ad may miss a chance to persuade voters.

It also can affect voters themselves.

“Over the years, I have had campaigns contact me and say can you stop putting out the early voting numbers because we are scared it is going to depress turnout,” Mr. McDonald said.

He said the reality in Georgia is there’s no way of knowing how early voting plays out, particularly given the nature of a runoff election, where the level of turnout is always in doubt.

“There is no reason for somebody not to show up to vote in Georgia because they think Warnock has already won the election,” he said.