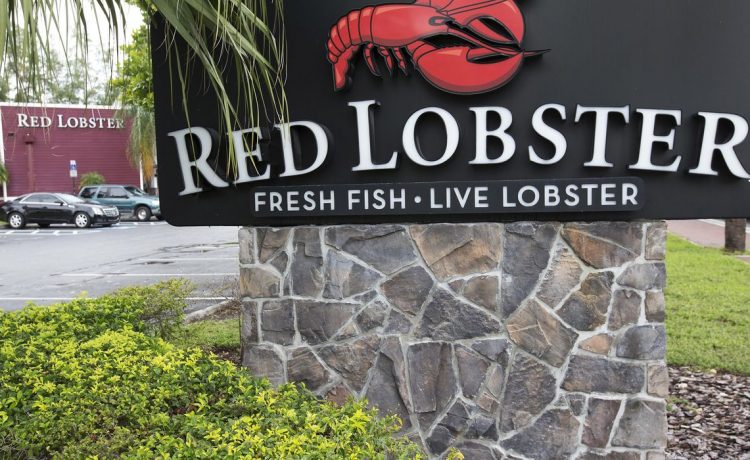 The lobster discovered Aug. 1 in Meridian, named “Biscuit” for the restaurant chain’s cheddar biscuits, is the second with the coloring to be found at a Red Lobster recently. In mid-July, another orange lobster, fished from the same area and named “Cheddar,” was found at a location in Hollywood, Florida.

Although orange lobsters are said to have a 1-in-30 million chance of existing, the recent discoveries, along with an orange lobster saved in a grocery store in Canada last year and one saved in a Tennessee restaurant last week, have aquarium officials questioning the statistic.

“Lobsters obtain their color through the pigments they ingest in their diet. If these orange lobsters are being harvested from the same region, perhaps their localized diet contains a pigment that, when paired with the lobster’s genetics, creates the orange coloration we are seeing,” Jared Durrett, the Ripley’s Aquarium of the Smokies director of husbandry, said in a statement from Red Lobster.

Red Lobster confirmed in its release that the two lobsters were fished from the same area, lending more credence to Mr. Durrett’s hypothesis.

“We plan to dive deeper into this and study the reasons why this abnormality is occurring more often. Our partnership with Red Lobster will allow us to capture data from fishermen, which typically is not easy to come by due to confidentiality,” Mr. Durrett said.

Lobsters may be associated with the color red, but that’s because all colors of lobster other than white turn red during the cooking process.

Most wild lobsters have shells of brown and blue hues, making the orange pigmentation a real outlier. The rare colors other than orange include white and yellow, among others.

The restaurant chain has established a protocol to save rare-colored lobsters for aquariums when a Red Lobster employee spots one. Workers send photos of the creature to Nicole Bott, the chain’s senior director of communications.

“We then work together along with our supply chain team to determine if the lobster is, in fact, rare. If it is, we work on a rescue plan, which could include an aquarium or a release to the wild,” Ms. Bott told Newsweek in an email.