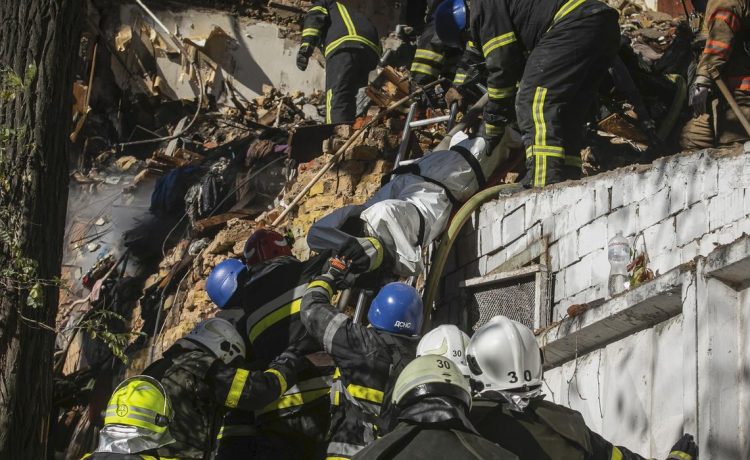 With a cold winter looming, Russian forces on Tuesday accelerated their assault on Ukraine‘s power and water infrastructure in what Pentagon officials called a concerted effort “to inflict pain” on Ukrainian civilians.

Whether it will be enough to turn the tide of a military campaign that has gone badly for the Kremlin is another question.

Russian drones and missiles hit the Ukrainian capital of Kyiv and other key cities across the country, specifically targeting power plants and other infrastructure. Ukrainian President Volodymyr Zelenskyy said 30% of his country’s power stations have been destroyed over just the past eight days, leading to rolling blackouts across the country.

The calculated attacks, Western defense officials said, are the latest proof of Moscow‘s evolving war plan in Ukraine. Having lost significant ground to a Ukrainian counteroffensive over the past month, Russian President Vladimir Putin is now embracing a darker strategy, Western officials say, one that centers on cutting off ordinary Ukrainians’ access to basic services such as electricity and clean water as winter sets in.

Kyiv and other cities in central and western Ukraine that have been relatively quiet as the initial Russian invasion was repulsed are once again facing daily reminders that Ukraine is a country at war.

The increasingly brutal attacks on non-military targets appear to have slammed shut whatever small window may have existed for diplomatic negotiations on a cease-fire between the two nations.

Some of Russia‘s offensive military arsenal has been drained after nearly eight months of war, but Western officials say Mr. Putin has been able to partially replenish his stockpiles with fresh deliveries of combat drones from Iran. Those “kamikaze” drones have played a crucial role in Russia‘s recent attacks on civilian targets in Ukraine, and Tehran appears poised to ramp up its military assistance.

Russian and Iranian denials of the new weapons pipeline have been widely dismissed in Ukraine and the West.

Citing multiple Iranian officials, Reuters reported Tuesday that Iran has agreed to ship more ground-based missiles and armed drones to the Russian military. The shipments will include the short-range Zolfaghar ballistic missiles and Shahed-136 drones. The latter has been central to Russia‘s “kamikaze” drone attacks on Kyiv and other Ukrainian cities in recent days.

Despite videos displaying what appear to be clear signs of Iranian missile technology from targeted Ukrainian cities, officials in Tehran insisted Tuesday they’re not taking sides in the conflict and simply want peace.

“Where [the weapons] are being used is not the seller’s issue. We do not take sides in the Ukraine crisis like the West. We want an end to the crisis through diplomatic means,” an Iranian diplomat told Reuters.

But British Defense Secretary Ben Wallace made a hastily-arranged visit to Washington Tuesday, reportedly to share British intelligence on the emerging Russian-Iranian nexus. There was already some speculation that the drone and missile shipments could result in a full suspension of the already faltering talks with Iran over reviving the 2015 nuclear deal repudiated by President Trump.

The Russian attacks have given new urgency to Mr. Zelenskyy‘s plea for the West to provide a comprehensive air shield over his country, one that could neutralize Moscow‘s ballistic missile capabilities and its expanding fleet of Iranian drones. Pentagon officials said they’re in contact with Kyiv and will work to bolster Ukraine‘s air defense systems, though it’s not clear how quickly fresh capabilities might arrive on the front lines.

“This is not something new for Russia. They continue to inflict damage on innocent civilians, on civilian infrastructure, as they fail to achieve their strategic objectives along the front line,” Pentagon spokesman Brig. Gen. Patrick Ryder told reporters at the Pentagon on Tuesday.

“They’re obviously trying to inflict pain on the civilian society as well as try to have an impact on Ukrainian forces. What we’ve seen so far is Ukrainian resiliency in their ability to get things like their power grids back online quickly,” he said. “In the meantime, our focus will continue to be on working with them to identify what their needs are, to include things like air defense. We’ll work to try to get those capabilities to them as quickly as possible.”

The situation appears most dire in eastern Ukraine, which remains the epicenter of fighting. In the Donetsk province — which Russia claims to have “annexed” but which still officially remains a part of Ukraine — local Ukrainian authorities have urged residents to evacuate as soon as possible. Gas and water services, they said, likely will not be restored by winter.

The northeastern city of Kharkiv and other major population centers also have seen infrastructure destroyed and homes badly damaged by near-constant fighting. In addition to the massive challenges now facing Ukraine‘s power-generation system, many homes have seen their roofs, doors and windows damaged or destroyed, making the coming cold winter months even more brutal.

Western military observers say the shift in Russian strategy stems from frustration. Mr. Putin‘s army, previously considered one of the world’s best, has made repeated missteps and strategic blunders in Ukraine. At home, anger toward the war effort has grown steadily over the past several months, reaching a near-fever pitch after Mr. Putin last month announced the call-up of as many as 300,000 reservists to refill Russia‘s depleted ranks in Ukraine.

The wave of air attacks targeting Ukrainian citizens has coincided with Mr. Putin‘s appointment of Gen. Sergei Surovikin as the commander of what Russian officials still refer to as the “special military operation.”

In his first television interview since his appointment, Gen. Surovikin effectively confirmed that Ukrainian advances in the east and south have put Russian defenders back on their heels.

“The enemy continually attempts to attack the positions of Russian troops,” Gen. Surovikin acknowledged, admitting the situation was particularly difficult around the southern city of Kherson that Russian occupying forces are struggling to hold.

“Further actions and plans regarding the city of Kherson will depend on the developing military-tactical situation, which is not easy,” the general said. “We will act consciously, in a timely manner, without ruling out difficult decisions.”

With prospects for a decisive battlefield victory dwindling, Mr. Putin now appears set on using the coming winter cold as an ally in defeating Ukraine, or at least ensuring such a miserable winter for the population that Mr. Zelenskyy‘s government will make concessions to Moscow.

“It is highly likely that a key objective of [the Russian attacks] is to cause widespread damage to Ukraine‘s energy distribution network.

As Russia has suffered battlefield setbacks since August, it has highly likely gained a greater willingness to strike civilian infrastructure in addition to Ukrainian military targets,” the British Ministry of Defense said in a Twitter post Tuesday.

As Ukraine prepares for winter, Europe is facing its own potential energy crisis after Russia slashed natural gas deliveries to the continent earlier this year. Europe’s energy supply faces more uncertainty after explosions last month rocked the Nord Stream 1 and 2 pipelines, which stretch from Russia to Europe.

Some European officials have publicly suggested Russia is responsible for the explosions, but the Kremlin has denied involvement.

Danish police on Tuesday said there has been “extensive damage” to the two pipelines, and that at least 165 feet of metal pipe appear to be missing.

“It is very serious, and this is by no means a coincidence. It doesn’t just seem planned, but very well planned,” Danish Defense Minister Morten Bodskov said Tuesday.