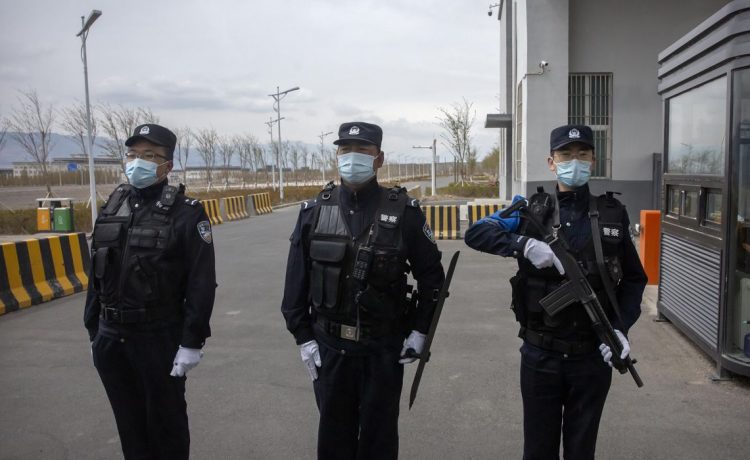 China has developed a network of overseas “police stations” to conduct covert operations aimed at forcing Chinese nationals, mostly political dissidents wanted by Beijing, to return to China, according to a report by a human rights group.

China’s Ministry of Public Security police operations netted 230,000 Chinese nationals between April 2021 and July who were “persuaded” to return to China as part of criminal investigations into fraud and computer crime, according to the investigation released by Safeguard Defenders.

However, the report noted that police operations code-named Fox Hunt included forced repatriations of 10,000 “high-value” persons from 120 countries by the end of 2021.

“Our deep-dive into individual cases also demonstrated how only about 50% of those reported were successful, and how most involved dissidents or individuals that had fled religious and/or ethnic persecution,” the report said.

The 21-page report, “110 Overseas: Chinese Transnational Policing Gone Wild,” is based on recent data provided by the Chinese government. The report was published last month by the Spain-based human rights organization. The report provides new details on secret Chinese police operations that the Justice Department has labeled “transnational repression.”

One veteran China-watcher called the findings a cause for deep concern, and a sign of China’s attitude toward the rights of other nations.

“The presence of PRC police in nations across Europe and the rest of the world is increasingly alarming,” said retired Navy Capt. Jim Fanell, a former Pacific fleet intelligence chief. “The notion that nation-states cannot police their populations without the assistance of the People’s Armed Police is not only an attack on the sovereignty of these nations, but is a reminder that the Chinese Communist Party continues on their path of global domination.”

Charles Burton, a former Canadian diplomat posted in Beijing, denounced the Chinese police activities in Canada as a clear violation of national sovereignty.

“This is an outrage,” wrote Mr. Burton, now with the Macdonald-Laurier Institute in Ottawa, in a recent op-ed article for the Globe and Mail newspaper on the report’s findings. “Chinese police setting up offices in Canada, then ‘persuading’ alleged criminals to return to the motherland to face ‘justice’ — while our own government and security services apparently choose to look the other way —  represents a gross violation of Canada’s national sovereignty, international law and the norms of diplomacy.”

The U.S. Justice Department is prosecuting several cases of Chinese officials charged with illegally harassing dissidents in the United States.

“These operations eschew official bilateral police and judicial cooperation and violate the international rule of law, and may violate the territorial integrity in third countries involved in setting up a parallel policing mechanism using illegal methods,” the report states.

The Chinese call their overseas police operations “110 Overseas” after the national emergency telephone number. At least 54 of the police “overseas service stations” were identified in 30 nations on five continents. Most are located in Europe.

The report identifies one Chinese service station in New York, and three in Canada that the report says are being used to support Chinese activities targeting overseas Chinese under the euphemism “persuasion to return.”

A Chinese Embassy spokesman also did not immediately respond to a request for comment.

According to the rights groups, the overseas police operations are being used to target dissidents, corrupt officials and low-level criminals, and pressures the targets directly or by threatening family members still in China, the report said. The police operations are part of Chinese President Xi Jinping anti-corruption campaign that has also served as a massive political purge of Mr. Xi’s rivals since taking power in 2013.

The report states that the covert police operations also leverage the Chinese Communist Party’s United Front Work Department front groups. The department is an influence and intelligence agency that has set up Chinese “Overseas Home Associations” on five continents that are linked to the secret police work, the report said.

The covert operations utilize three methods of “involuntary returns” to force target persons to return to China: influencing an overseas target by tracking down family members in China and using intimidation, harassment, detention or imprisonment to convince the family member to return “voluntarily;” directly targeting a person online or through undercover agents or proxies who threaten and harass the target into returning voluntarily; and, last, through kidnappings of targets on foreign soil.

The FBI has identified secret Chinese assassination teams based in Hong Kong that can be deployed rapidly to kill Chinese nationals targeted overseas. The teams were disclosed in court papers in a Chinese spy case in Los Angeles several years ago.

In May, a U.S. citizen and four Chinese nationals from the Ministry of State Security (MSS), the intelligence service, were charged with conspiracy and other charges related to an espionage and transnational repression operation involving pro-democracy human rights activists.

“We will not tolerate efforts by the PRC or any authoritarian government to export repressive measures to our country,” said Matthew G. Olsen, assistant attorney general and chief of the national security division.

Two months earlier, the Justice Department unsealed an indictment of another MSS official charged with hiring a private investigator to harass and physically assault a Chinese pro-democracy activist.

China’s rulers are using police operations to remind the millions of Chinese who left China that they are still subject to the dictates of the ruling Communist Party.

“This provides Beijing with an army of conscripts in foreign nations who will execute Beijing’s bidding,” Capt. Fanell said. “Free and open nations should reject this overt interference.”