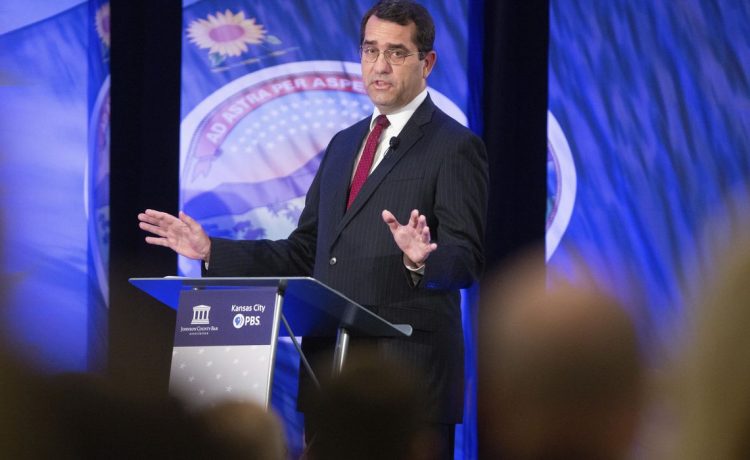 TOPEKA, Kan. — The Republican candidate for Kansas governor is pivoting from education to crime as a focus in the final weeks of the campaign, portraying the Democratic incumbent as anti-police because she created a commission on policing and racial justice in response to the state’s protests following the death of George Floyd in 2020.

GOP challenger Derek Schmidt, the state’s three-term attorney general, launched a new television ad Thursday against Democratic Gov. Laura Kelly after suggesting during a debate Wednesday that she’s largely ignored crime as an issue. In what is expected to be a close race, Schmidt is adopting a tactic used by Republicans across the U.S., and his new ad features video of violence during protests in New York City that followed the police killing of Floyd in Minneapolis.

Schmidt said Wednesday that providing “unwavering” support for law enforcement officers and prosecutors is the most important thing a governor can do to fight crime.

Kelly argued during the debate that her support for law enforcement is shown by the state’s spending on it. Since she took office, spending on the prison system and Kansas Highway Patrol has grown nearly 33%, though funding for the Kansas Bureau of Investigation, under Schmidt’s control, has remained flat.

The KBI recently reported a small decrease in violent crime in Kansas in 2021 compared to 2020 but said it remained above the average for the past 10 years.

Schmidt’s ad criticizes Kelly over her Commission on Racial Equity and Justice, which she formed in June 2020. The commission issued numerous recommendations in 2020 and 2021, but neither its members nor Kelly pushed the Republican-controlled Legislature to enact them.

The commission’s recommendations included ensuring “robust” anti-bias training, prohibiting fired officers from working again in law enforcement agencies and revising local policies on using force. Schmidt’s campaign specifically took issue with a recommendation that schools look for programs to use “along with or instead of” school safety officers to address student conflict and violence.

In June 2020, with the state expecting revenues to drop drastically early in the coronavirus pandemic, Kelly cut $5 million from the budget for grants to schools to allow them to hire safety officers. The Department of Administration said Thursday that the funds returned for this school year.

In April 2021, Kelly vetoed an item in the Highway Patrol’s budget that would have required its Capitol Police to receive pay equal to that of other troopers. Kelly said in her veto message that lawmakers should allow the patrol to handle the issue internally.