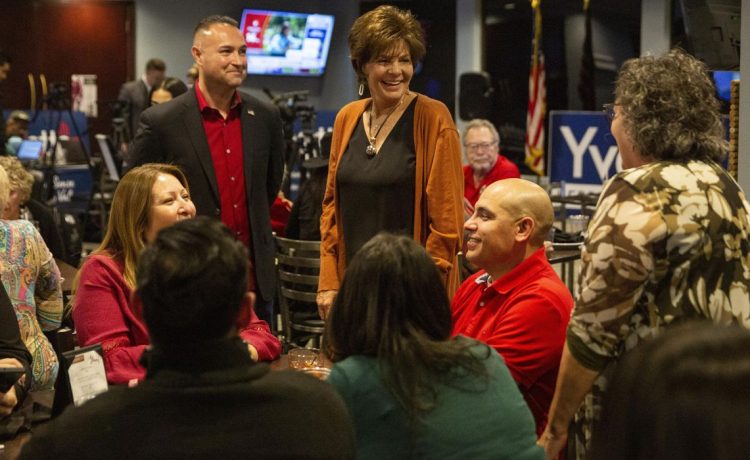 Herrell congratulated Vasquez as more votes were tallied but also blasted recent changes to the 2nd District’s boundaries by Democratic state lawmakers at the expense of rural communities.

A Republican court challenge is pending against a congressional redistricting plan for New Mexico that divvied up a conservative, oil-producing region, with related arguments scheduled before the state Supreme Court in January. Herrell said she was confident Republicans would retake the seat in 2024.

“Two years ago, the Democrats in Santa Fe announced they would gerrymander our district to ensure they would totally control our state’s federal delegation,” Herrell said in a statement. “They did just that, ignoring the will of the people in the process. … Stay tuned!”

The Associated Press has not declared a winner in the race.

Vasquez declared victory Wednesday and said he would take on a sacred responsibility to represent a district that stretches from the U.S. border with Mexico across desert oilfields of the Permian Basin and portions of Albuquerque.

“To everyone out there struggling, no matter whether you voted for me or not, please know this: I see you, I hear you, and I’ll fight my heart out for you, because public service is a sacred responsibility that I will never take for granted,” Vasquez said in a statement.

On the campaign trail, Vasquez highlighted his Latino heritage and an upbringing along the U.S. border with Mexico in a working-class, immigrant family. He advocated for solutions to climate change and conversation of public lands in a district traditionally dominated by the oil and natural gas industry.

Vasquez broke into politics as a Las Cruces city councilor and campaigned for Congress on support for workers’ rights and preserving access to abortion. He painted his opponent as an extremist for voting against the certification of Joe Biden as president after the 2020 election.

New Mexico has taken on an outsized role in providing access to abortion for residents of neighboring states. Operators of the Mississippi clinic at the center of the court battle that overturned Roe v. Wade have opened a clinic in southern New Mexico.

New Mexico Democrats won a new mandate in the midterms with the reelection of Gov. Michelle Lujan Grisham as the state grapples with whiplash from the COVID-19 pandemic and the aftermath of public health orders that shut down classroom learning for a year in many public schools.

On election night, Lujan Grisham hinted at her priorities for a second term that begins in January with the start of a 60-day legislative session. State government income and spending have surged in the midst of record-setting oil production in the southeastern corner of the state.

“New Mexico said yes to more health care for families, better education for kids, more economic freedom … for workers and more for students,” Lujan Grisham said. “Tonight New Mexicans said we are and will continue to be a state that protects reproductive rights and basic human rights of every single member of the LGBTQ” community.