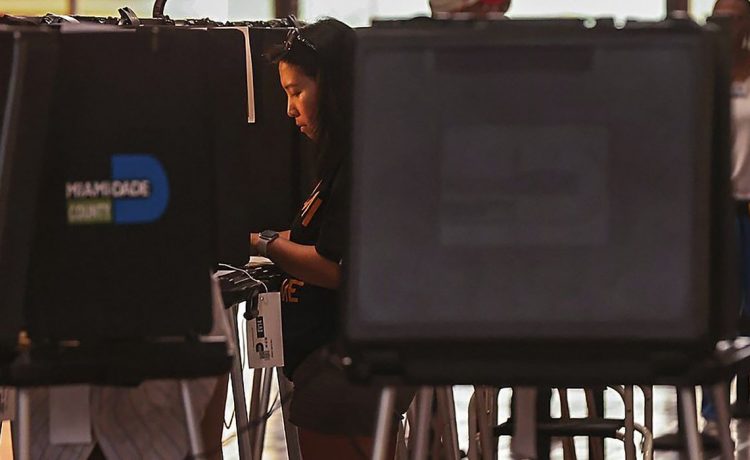 GAINESVILLE, Fla. — In an extraordinary sign of trouble for Democrats and a good omen for the GOP in Florida ahead of Election Day, the number of registered Republicans voting in Miami-Dade County surpassed Democrats on Wednesday – one day after President Joe Biden visited the area on a campaign swing.

The most populous county in Florida, Miami-Dade – with more than 1.5 million registered voters – has been a Democratic stronghold along the state’s Gold Coast with largely blue Broward and Palm Beach counties for a generation. They had provided a bulwark of reliably Democratic votes against less-populated Republican counties across Florida, including most of the Panhandle and southwest coast.

Less than one week before the election, Miami-Dade was looking more red than blue.

“This is not what we expected,” said Christine Alexandria Olivio, the Democratic House candidate in Florida’s 26th Congressional District in South Florida. “We’re getting our butts kicked right now.” She was running against Republican Rep. Mario Díaz-Balart, the longest-serving member of Congress in Florida.

Registered Democrats still outnumbered Republicans in Miami-Dade, but the latest figures indicated Democrats – at least so far – were voting less than their GOP counterparts.

The swing toward higher Republican turnout in the county – with just one week before the election – was widely interpreted as a sign of support among the area’s Hispanic voters for incumbent Republican Gov. Ron DeSantis – and a lack of enthusiasm for his Democratic challenger, Rep. Charlie Crist. The county is nearly 72% Hispanic.

At Tuesday’s campaign appearances in South Florida, Biden criticized DeSantis – widely expected to run for the Republican presidential nomination in 2024 – as “Donald Trump incarnate” and said the governor’s race here was “one of the most important races in the country.”

Large numbers of voters in Miami-Dade – more than 487,000 – are not affiliated with either party, but turnout among those voters so far has been relatively low.

Nearly 27% of GOP voters in Miami-Dade had voted by Wednesday, compared to 21% of Democrats and 14% of unaffiliated and third-party voters. In raw numbers, Republicans and Democrats were about neck-and-neck with both surpassing 118,000 voters and Republican gaining a slight edge mid-morning. More than 66,000 without party affiliation had voted.

“We’re not drawing out our own base,” Olivio said. “Democrats know the message. So, why are they not turning out?”

DeSantis could become the first Republican governor to win in Miami-Dade since Jeb Bush in 2002. Only Broward County has more registered Democrats in Florida. Political polls in recent weeks have consistently shown DeSantis ahead of Crist statewide by double digits.

The governor’s contest was among the marquee races this year drawing the most interest among Florida voters. The state’s senior U.S. senator, Marco Rubio, also is facing re-election to try for a third term against his Democratic challenger, Rep. Val Demings.

“The average citizen has woken up and has had enough of this nonsense,” Alina Garcia, the Republican candidate for a state House seat in Miami, wrote in an email. “That’s why you’re going to see Republicans outperform Democrats in such high numbers. That’s why you’ll see our proactive and highly effective governor get re-elected and, quite frankly, possibly win in Miami-Dade County.”

The county-by-county turnout figures – updated every 15 minutes – were compiled by Fresh Take Florida, a news service of the University of Florida College of Journalism and Communications. Last week, in another unusual milestone in Florida, Republicans statewide cast more ballots overall during early, in-person voting and by absentee voting than Democrats. On Wednesday, Republicans remained ahead by more than 178,000 votes statewide.

The turnout figures show the number of ballots received from registered voters of each party but do not indicate how each person voted.

Republican turnout also had surpassed Democrats in the counties of Duval, home to Jacksonville, and Seminole, northeast of Orlando. GOP turnout was also unexpectedly high – but still behind Democratic voting – in Hillsborough County, home to Tampa.

In Pinellas County, west of Tampa, Republican turnout also was high compared to Democrats. The county is home to Crist’s seat in Congress.

The political climate might become even more dire for Democrats on Election Day: In previous elections, Democrats have traditionally voted early, with Republicans – who have eschewed voting by mail as unreliable – showing their highest turnouts on Election Day. It wasn’t clear why that pattern looks different so far this year, but the figures showed Republicans appear more comfortable casting ballots by mail.

There were signs of a Republican surge in South Florida in earlier elections.

Lower-than-expected turnout among Democrats in Miami-Dade was widely credited with helping Trump win Florida in 2020, even though Trump lost the presidency overall to Biden. Trump lost Miami-Dade by about 85,000 votes but won statewide by 371,686 votes.

This story was produced by Fresh Take Florida, a news service of the University of Florida College of Journalism and Communications. The reporter can be reached at [email protected] You can donate to support our students here.