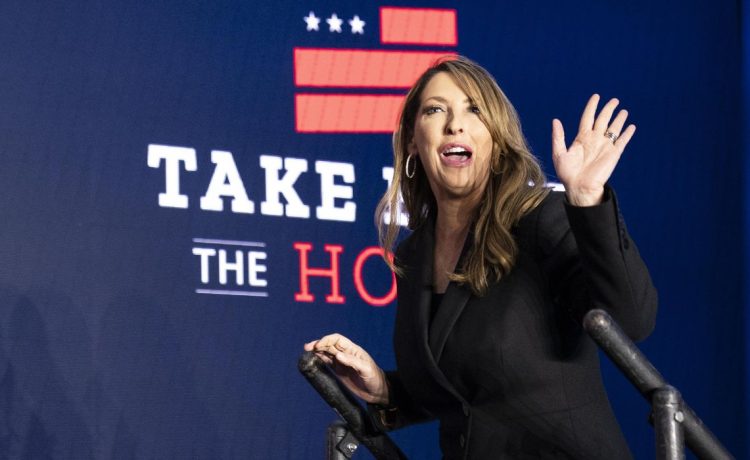 First there were the never-Trumpers and now there are the never-Ronnas — those who don’t want to see Ronna McDaniel win a fourth term as head of the Republican National Committee.

The latest evidence comes from a Trafalgar Group poll of 1,000 GOP voters with just 14% picking Mrs. McDaniel in a head-to-head match-up with Harmeet Dhillon, her most prominent rival, in the race for RNC chair.

Trafalgar conducted the poll after Mrs. McDaniel poo-pooed an earlier survey that found just 6% of those surveyed wanted to see her reelected.

Ms. Dhillon has touted the latest polling, sharing it on social media with a “Thank you!” message.

“I don’t trust the poll,” said Glenn McCall, an RNC member from South Carolina. “If I asked the average Republican who is the chairman of the RNC and the co-chair, they couldn’t tell me.”

SEE ALSO: Jeffries says GOP must handle George Santos issue on its own

The polls, sponsored by Convention of the States Action, don’t have any practical effect. It’s the 168 members of the RNC who will vote later this month on their next chairman. Rank-and-file party adherents have no direct say.

The survey nevertheless underscores a broad dissatisfaction among Republican voters with the leadership at the RNC.

The challenge to Mrs. McDaniel is playing out as the GOP tries to figure out what went wrong in the 2022 midterm elections, with some wanting to blame the RNC chairwoman instead of former President Donald Trump.

Ms. Dhillon, a lawyer and member of the RNC from California, is credited with running an aggressive campaign that has energized activists and made life uncomfortable for Ms. McDaniel by exposing the grassroots desire to give the establishment a bloody nose.

Her supporters say the wind is at her back. They point to, among other things, the recent endorsement from Home Depot founder Bernie Marcus as proof she is taking off.

The RNC will host a members-only, closed-door, candidate forum at its winter meeting that opens on Jan. 25 at Dana Point, California.

That’s where Mrs. McDaniel and Ms. Dhillon will deliver their closing arguments.

Several other candidates have announced their interest, including My Pillow CEO Mike Lindell, but they have been treated as a sideshow of the main event.

Mr. McCall was among the 100-plus RNC members who signed a letter shortly after the November elections endorsing Mrs. McDaniel.

While there may have been a “couple of defections,” Mr. McCall said Ms. McDaniel still has enough support to win over 50% of the vote at the RNC meeting

Ms. Dhillon did not respond to a request for comment.

But Mark Meckler, president of Convention of the States Action, said not to ignore the implications of the new polling.

“As we’ve seen with recent events on Capitol Hill, the era of the establishment is over,” Mr. Meckler said. “The grassroots are pushing back and making their voices heard. And — contrary to what Ronna McDaniel has stated publicly — the leadership of the RNC should ultimately reflect the will of the Republican voter and move Republicans forward at the ballot box.”

Ms. McDaniel, the niece of Republican Sen. Mitt Romney of Utah, was Mr. Trump’s pick to lead the RNC in 2017 and has run without opposition in that race and two subsequent elections.

To the dismay of many Republicans, Mr. Trump has stayed on the sidelines this go-round.

Mrs. McDaniel’s supporters also have been accused of trying to raise doubts about Ms. Harmeet’s Sikh religion as a way to scare away Christian conservatives. The McDaniel team denied the charge, and Mrs. McDaniel condemned religious bigotry.

Mrs. McDaniel says the RNC shouldn’t be blamed for the GOP’s lackluster performance in November’s elections.

“The RNC is infrastructure. … We’re the stadium. The players play in our stadium. The infrastructure is necessary for victory. And that’s why I want to stay on,” Mrs. McDaniel said in a recent interview with The Washington Times.

Emma Vaughn, a spokesperson for the McDaniel campaign, said the chairwoman’s decision to seek reelection was driven by the RNC’s 168 members.

“Members of the 168 rallied around the chairwoman because of her unprecedented investments in the grassroots, election integrity, and minority communities, and for taking on Big Tech and the biased Commission on Presidential Debates,” she said.