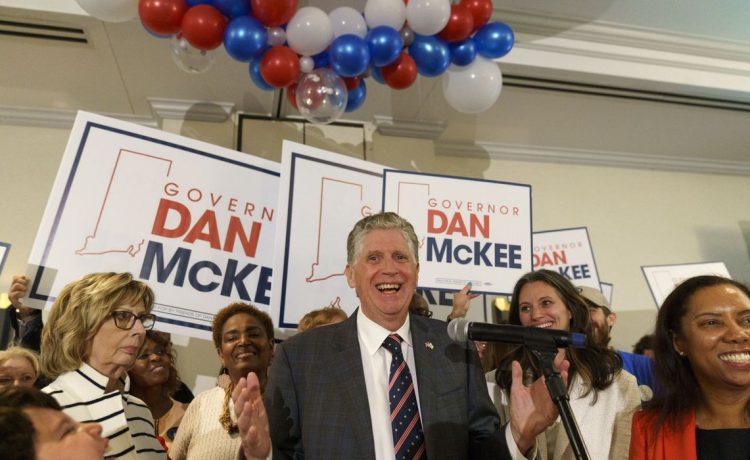 PROVIDENCE, R.I. — Rhode Island Gov. Dan McKee eked out a victory in his Democratic primary on Tuesday, beating back strong challenges from a pair of opponents as he seeks his first full term in office.

McKee, the former lieutenant governor who became the state’s chief executive a year and a half ago when two-term Gov. Gina Raimondo was tapped as U.S. commerce secretary, will be the heavy favorite in the liberal state in November against Republican Ashley Kalus, a business owner and political novice.

McKee edged out former CVS executive Helena Foulkes, who saw a late surge in the polls and won a last-minute endorsement from The Boston Globe’s editorial board. Secretary of State Nellie Gorbea, who was seeking to become the first Latina governor in New England, finished a close third.

“I’m proud to be here,” the 71-year-old governor said in his victory speech. “Because Rhode Island is positioned in a way where we’ve never had this momentum before and we’re going to take full advantage of it.”

In an awkward moment, a phone was handed toward McKee during the speech. When he was told it was Foulkes, McKee said, “No, that’s not going to happen.” As the crowd chanted “four more years,” McKee said, “Hang up on them, hang up on them.”

Foulkes told her supporters she was unhappy McKee wouldn’t answer her call.

In the last primaries before the November general election, voters in Rhode Island were choosing nominees for statewide offices, U.S. House, the state Legislature and local positions. New Hampshire and Delaware also held primaries on Tuesday.

With his victory, McKee avoided becoming the first governor to lose his primary since 2018, when Kansas Gov. Jeff Colyer narrowly lost the Republican nomination to Secretary of State Kris Kobach, who went on to lose the general election to Democrat Laura Kelly. Like McKee, Colyer took over when the sitting governor resigned for another job.

In his campaign, McKee touted his leadership in navigating the state’s economic recovery from the COVID-19 pandemic after he was sworn in as governor in March 2021. Foulkes said she would work to find new ways for companies to invest in Rhode Island and help existing companies find new markets. Gorbea argued the state needed better leadership on issues like housing, education and climate change.

Kalus easily defeated her lone Republican rival, Jonathan Riccitelli, whom the Globe reported had been arrested dozens of times since 2000 under a different name, on charges ranging from obstructing police officers to assault, according to court records.

Kalus, who owns a COVID-19 testing company that’s in a dispute with the state over a canceled contract, moved to Rhode Island last year from Illinois and previously worked for former Illinois Republican Gov. Bruce Rauner. She said Rhode Island needs a fighter like her, now more than ever, because every day gets harder for working families.

In another top race on Tuesday, voters were choosing nominees in the 2nd Congressional District for the seat being vacated by Democratic Rep. Jim Langevin, who is retiring after more than 20 years representing the district. Langevin was the first quadriplegic to serve in Congress.

State Treasurer Seth Magaziner, who was endorsed by Langevin, won the crowded Democratic primary. Republican Allan Fung, the former mayor of Cranston, was unopposed in his bid for the Republican nomination. National Republican leaders think this is their best chance to flip the seat in more than three decades. House Republican leader Kevin McCarthy visited Rhode Island in August to raise money for Fung.

Magaziner had been running for governor but switched races after Langevin’s announcement to try to keep the seat in Democratic control. Magaziner told supporters Tuesday night that the election is about values and preserving democracy for the next generation.

But the top race in Rhode Island on Tuesday was the Democratic gubernatorial primary. Both McKee and Gorbea benefited from the base of support and name recognition they have gotten since both were elected to statewide office in 2014. Foulkes proved to be an adept fundraiser and spent heavily on the race in her first bid for public office.

Late in the primary, Gorbea’s campaign aired an attack ad to criticize McKee over the awarding of a controversial state contract that the FBI is now investigating. It had to pull the ad because of errors in it, including featuring an article by a conservative commentator who was criticizing McKee on another issue. McKee’s campaign said the governor would continue to rise above dirty politics and false attacks, and show “leadership when it matters most.”

McKee was endorsed by a host of large unions, including those representing teachers, firefighters, building trades and auto workers. He highlighted his efforts to help the state’s economy recover from COVID-19, the gun control bills he signed into law and his efforts to protect access to abortion care.

He had a memorable ad of his own, called “motha,” featuring his 94-year-old mother. As he plays cards with her, he discusses the state’s economic recovery from COVID-19, eliminating the state’s car tax, creating affordable housing and passing gun safety laws to keep families safe.

“Not bad for a year and a half,” the governor says.

His mother, Willa, replies, “Not bad for a governor that lives with his motha.”

During his victory speech, McKee ticked off his accomplishments and asked the crowd, “Are you ready?” He said, “Not bad for 18 months.” Laughing, some of his supporters said Willa’s line, “Not bad for a governor that lives with his mother.”