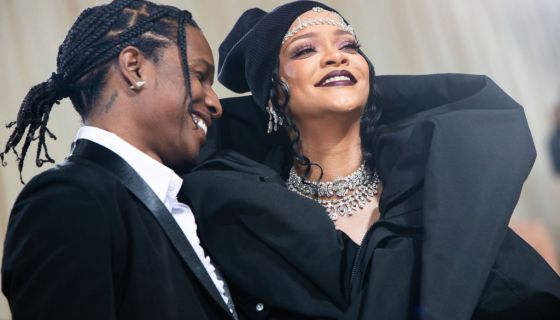 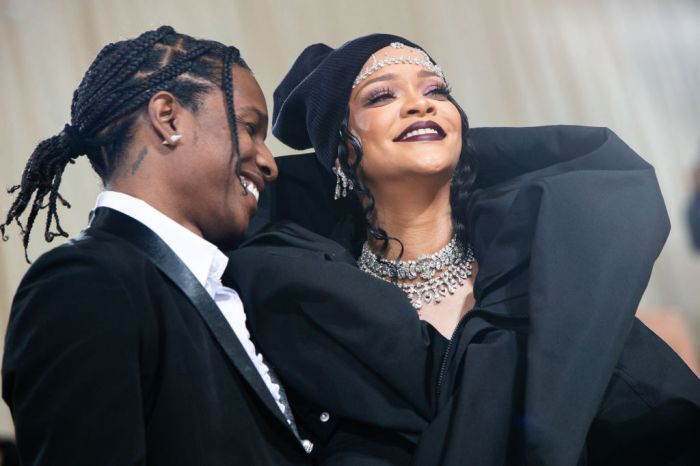 The megastar showed up flawless and fine dressed in a $10,600 Prada Fall 2022 tobacco leather jacket. The oversized leather jacket comes with a shearling-lined zipper hood trimmed with Aspen for a soft effect with delicate color contrasts. She paired the look with a brown shirt, brown snakeskin skirt and purse to match.

Rihanna was present to cheer on her partner A$AP. Ahead of his live-streamed performance for Amazon Music Live, the Grammy-nominated rapper appeared on screen during a commercial break for Thursday Night Football and announced his new album Don’t Be Dumb.

He then went on to perform three songs from his long-teased album. One of these new songs paid tribute to fallen hip-hop icons, with the rapper projecting images of Tupac Shakur, Biggie Smalls and DMX as he performed.

Rih and her baby daddy are on one accord as she also made her long-awaited return to music with the Black Panther: Wakanda Forever soundtrack.

The new mom looked proud and filled with joy as she joined the small crowd to pull out her phone and record her man.

“You gotta know that we the highest statistic of losing people,” Rocky said to the crowd. “No other genre loses rockstars, pop singers and country artists.”

“Hip-hoppers,” he declared, “we get killed and shot everyday. Overdoses, all types of unfortunate events.”

In addition to his big news, A$AP Rocky performed a few of his classic hits as Rihanna sang along.

The roles will soon be reversed in February when Rihanna performs at halftime of the SuperBowl. We’re sure A$AP will be front and center supporting his boo.

Rihanna and Rocky have been friends since around 2012, and began dating in 2020. The couple have kept their son firmly out of the spotlight and have chosen not to share photos of him – or even reveal his name.

Are YOU excited to see Rihanna hit the stage again? Let us know your thoughts below!