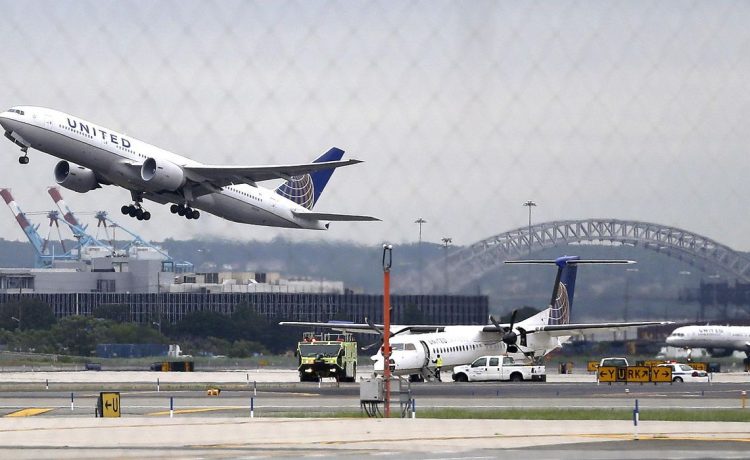 Travelers may have to endure another ugly holiday experience at the airport over the fast-approaching Labor Day weekend, according to recent reports.

Airfares for the long Sept. 2-5 weekend are up and demand is down from years past as a new round of flight interruptions looms, booking service Kayak said Monday.

Between May 1 and Aug. 8, Kayak said searches for domestic flights during the long weekend fell 9% from last year and 31% from 2019.

During the same period, searches for international flights declined 57% from last year and 12% from 2019.

Delta cited New York airport construction, large numbers of crew calling in sick, bad weather and air traffic control interruptions as reasons for asking the FAA to waive its minimum slot requirements — issues that could hit other airlines over the next two weeks.

“The FAA expects Labor Day will be busy for air traffic, with the heaviest traffic on Thursday and Friday before Labor Day,” the agency said in an email Monday. “We recommend passengers check with their airlines for a status on their flights and check fly.faa.gov to see conditions at a particular airport.”

In a separate statement, the Department of Transportation pledged to hold accountable any airline that fails to issue prompt refunds for canceled flights.

“The Department expects that when Americans buy an airline ticket, they’ll get to where they need to go safely, affordably, and reliably,” the DOT said in an email.

U.S. air carriers have already trimmed thousands of flights from their summer schedules as COVID-era staff shortages leave them struggling to handle a post-pandemic rebound in travel demand.

Flight delays have also been common this summer, as the Memorial Day and Fourth of July weekends stranded weary passengers at airports nationwide.

Several airlines recently approved pay increases for their pilots, many of who complained of burnout in recent demonstrations outside major airports.

Experts say the holiday interruptions could last for years as airlines keep over-booking flights to maximize profits in the wake of a $54 billion federal bailout that kept them afloat during pandemic shutdowns.

“They are continuing efforts to generate working capital selling flights they do not expect to be able to operate,” said Robert W. Mann Jr., an independent airline analyst and consultant in Port Washington, New York.

The former American Airlines executive noted that “fares and demand have peaked” as the COVID stimulus funds run out.

“I expect a more-than-seasonal capacity reduction in the fall as airlines continue to downsize operations to what they can support, despite having sold many of those canceled flights months in advance,” Mr. Mann said.

Most of the airlines, including Delta, did not respond to an email. United had no comment.

Southwest, which sells its fares directly, referred to a July 28 statement from CEO Bob Jordan noting “less than one percent of scheduled flights” were canceled in May and June. At the same time, Southwest reported a record second-quarter income of $825 million.

As airlines trim flights and raise fares, fewer Americans may want to fly.

Kayak reported that a flight to Los Vegas, the most popular Labor Day weekend destination in customer searches, averages $290 this year.

According to the American Legislative Exchange Council, a network of conservative state legislators and private investors, these numbers suggest some travelers are running out of vacation money.

“Inflation is still at its highest level in over 40 years and it’s far outpacing the growth in wages,” said Lee Schalk, the council’s vice president for policy. “That means Americans are essentially taking a pay cut each month, with fewer dollars left for vacations, airfare, or car rentals.”